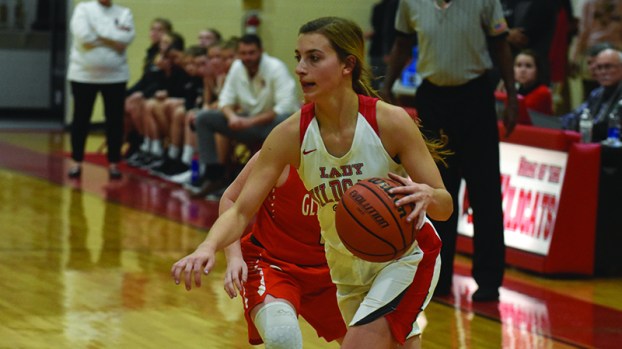 Springwood senior McKayla Barber drives to the rim against Glenwood. Barber committed in February to play at Faulkner.--File Photo

Leading up to the AISA All-Star game, Springwood senior point guard McKayla Barber felt like she was supposed to commit to Faulkner, but she wanted to make sure. So she prayed about the decision the entire week, looking for a sign. After not getting a sign in the sky, she decided to ask for peace of mind instead of a big sign.

“By the end of the week, it started to feel like a good idea,” Barber said.

She committed to Faulkner on Feb. 21 and played in the All-Star game later that day.

When she went on a tour, she was able to meet some of the coaching staff, specifically assistant coach Joel Harrison. She asked him if it was possible for her to play on the team, since he had never watched her play.

“I was kind of nervous because I wasn’t sure whether I’d be able to go,” Barber said. “He was really, really welcoming. He was like, ‘Yeah, I’d love to see you play, just send me stuff’. So he was encouraging and gave me a little bit more confidence to send in my stuff and hope for the best.”

Her tape spoke for itself, and the Eagles coaching staff wanted her to join the team.

She’s been able to talk with Harrison and the rest of the coaching staff pretty regularly, and she was added to a team Groupme.

Alongside the ability to continue her athletic career, there were two parts of Faulkner that drove Barber to commit to the Eagles.

The first is it is a Christian school. Barber is extremely passionate about her faith, and it is shown in many ways throughout her life. A visible way is on her jersey. In softball, she wears the number 77 and in basketball, she wears 14. The number seven is significant throughout the Bible, starting with the first chapter, as God created the universe in seven days. There are also the seven tribes of Israel, the seven plagues of Egypt, etc.

Since she can’t wear seven in basketball (legal numbers have to be between 1-5, 10-15, etc.), Barber decided on 14 because it was the first variable of seven she would be allowed to wear.

Alongside the religious aspect, the school is close to her house, as it takes only 63 minutes from her house to get to campus.

“My family is a close unit, and we always try to spend time with each other, especially my extended family, like my aunts and uncles and cousins. We always get together every holiday, every birthday,” Barber said. “ I wanted to make sure that they could be a big part of my life for as long as possible. I wanted to make sure that I could come down for birthdays and holidays just to keep close with everybody.”

Barber averaged 11.1 points, 2.4 rebounds and 4.8 assists in her final year as a Wildcat, allowing her to play in Montgomery for the AISA All-Star game. She was part of the winning team, as the East girls won 58-53.

“I loved it,” Barber said.  “It was really different than a regular game. But it was really cool to be with and get to know the people from different schools around me that I’ve been playing against.”

Along with making the all-star game, she was given an honorable mention by the Alabama Sports Writers Association for her play.

“I’m an overachiever. I always want the best so I was kind of upset that I only got an honorable mention, but it’s still a really good privilege,” Barber said.

Right now, Barber is still trying to figure out which major she wants to pursue. She has the final decision down to three: business management, music, so she can be a worship leader and psychology, because she has an interest in therapy and counseling.

Richard Carter taking retirement one day at a time

While at the podium in Birmingham, Lanett head basketball coach Richard Carter said the first thing he was going to... read more