Beulah grads participate in parade, cross stage to get diplomas 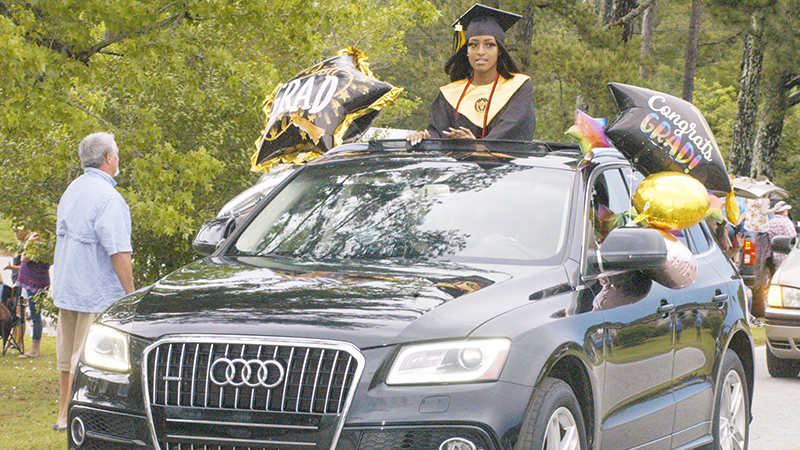 A parade was held Friday night for seniors in Beulah High School’s graduating class. Vehicles lined up outside Beulah Baptist Church and the route took them to Beulah Elementary School, where a ceremony was held to recognize the graduates. --Wayne Clark

BEULAH — A large group of Beulah High seniors who had not been together in a classroom setting since March completed their high school years in a memorable way Friday evening, participating in a fun parade before receiving their high school diplomas amid COVID-19 restrictions.

Luckily, threatening skies did not rain on the parade or the ceremony, and the seniors did have one last memorable experience before heading on to college life, military commitments or hopefully, a job somewhere.

Lining up for the parade took place outside Beulah Baptist Church with a truck, SUV or car carrying a cap and gown-clad senior along Lee Road 270 (a.k.a. Coach Weldon Parkman Drive) approximately one mile to the parking lot in front of Beulah Elementary School, where a stage was set up for the ceremony. There were lots of black and gold balloons, signs with the graduate-to-be’s name and applause from the crowd as the slow-moving procession moved on.

Students and their parents parked in separate cars in the school parking lot.

Speaking from the stage, BHS Principal Dr. Cincrystal Poythress welcomed everyone to the commencement and commended the students and their parents for seeing through their senior year under difficult circumstances. As Poythress asked the students to step outside their cars and for the ceremony to begin, there was lots of honking horns and cheering.

Dressed in their black caps and gowns, the students approached the stage from the right side.  The students were awarded their diplomas in alphabetical order. Poythress commended the seniors on having earned a total of $805,470 in scholarship offers.

Everyone was asked to stand and to recite the Pledge of Allegiance and to have a moment of silent prayer before Assistant Principal Adam Johnson started handing out the diplomas.

The students were seated in rows near the stage. As the first row was called to line up to the right of the stage, parents of these students could go to the grassy median in front of the stage for a close look at the diploma presentation. Many of them took photos with their phones.

When everyone on the first row had received their diploma and were seated again, rows two and three were lined up. The parents of those students were allowed to stand in the median for a better view. This continued through eight rows of students.

Lee County Sheriff’s Office deputies provided security at the back of the parking lot. Several hundred friends and family members watched from the curved bank just outside the parking lot. Anyone who tried to get closer was asked to stay back. School officials did an excellent job with the social distancing and limited crowds within the ceremony but outside the secured area everyone did their own thing and very few of them had masks.

All in all, it was a fun event, especially for the seniors who had been at home taking virtual classes for weeks and isolated from classmates. There were many smiles, cheering and family members holding signs with such messages as “We love you, Bailey!” and “Congrats, You Did It!” lining the parade route.