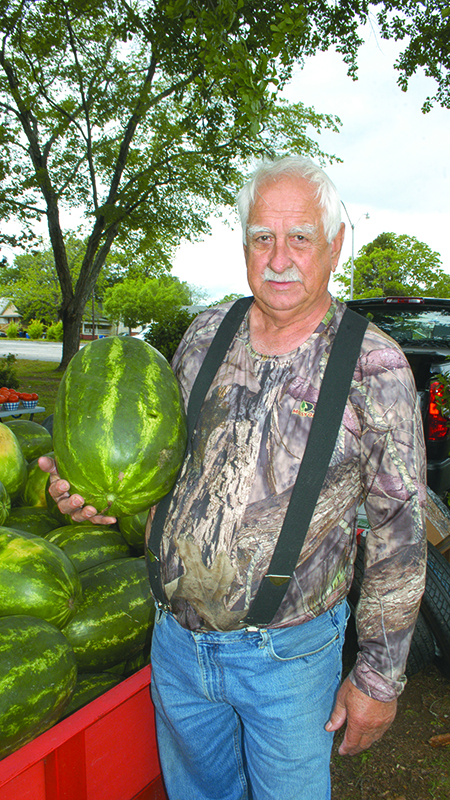 LANETT — Verbon White has the kind of business that’s OK with the COVID-19 restrictions. He’s providing food and that’s considered essential. He never has more than 10 people there at one time, and that’s within the restrictions on gatherings, and there’s plenty of room for social distancing.

“We are not in an enclosed space,” he said. “We are outside in the open air, and I am in a nice, shady place that keeps my produce fresh.”

“I love what I do,” he said. “I’m retired, and doing this gives me a reason to get up in the morning. It keeps me going, and that’s so much better than sitting around doing nothing.”

White had a good year in 2019 selling produce at the same spot and thus far business has been even better despite the recent shutdown.

He has a trailer load of watermelons and a table filled with vine-ripe tomatoes, cantaloupes, okra, cucumbers, squash and sweet tomatoes.

He gets the watermelons from Cordele, Georgia and the other produce from a farmer’s market in Atlanta.

Cordele is famed as the watermelon capital of the world, but the ones being sold there this time of year weren’t grown there.

“They were grown in south Florida,” White said. “The ones from Cordele won’t be ready until this summer.”

Watermelon crops follow the growing season. First, they are in south Florida, then in central Florida, north Florida/south Georgia, and later on throughout the south.

The biggest ones White is selling right now are the Sangrias. They range from 20 to 40 pounds each. He also has the smaller but very popular Sugar Babies and yellow meat watermelons.

He likes talking to people when they drop by and making them happy when they leave with fresh produce.

White is originally from Taylor County, Georgia and once raised egg-laying chickens for the Tyson Company. He lives in the Five Points area and stays really busy this time of the year.