Hardy loves giving back to hometown 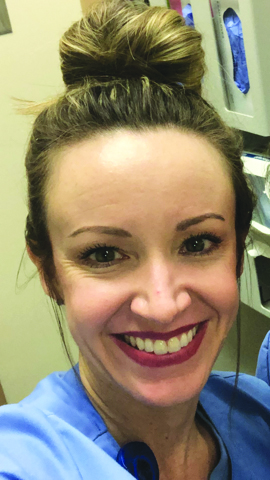 Kristin Hardy made the move to the Emergency Room in January of 2020 at EAMC-Lanier, which is her hometown hospital.

After growing up with a mother who was in nursing, Kristin Hardy knew the demands of working as a nurse. As she was growing up, she wanted to become a nurse but she decided to get a bachelor’s degree in business instead.

After graduating from Auburn, that desire was still there, tugging at her, so she decided to go back to school.

“It’s just one of those things that once you’re called to do it, I don’t think there’s any escaping it,” Hardy said.

“It’s been cool to serve the community that I grew up in,” Hardy said.

Hardy’s first desire was to start in the emergency room.

“From a young age, I used to love those shows like ‘Trauma: Life in the ER,’ it just got me fired up,” Hardy said. “My original dream was to go work at some huge trauma center in Atlanta, where you see all the good stuff, but life takes you down different roads.”

Even though she had always dreamt about working in the emergency room, Hardy started in the labor and delivery department because of the people that helped deliver her child.

“I ended up having a child during nursing school and just the care that I got on labor and delivery really kind of changed my mind from going to ER to LND,” she said.

After working as a nurse for a couple of years, Hardy decided to go back to school to get a masters’ degree in primary care nurse practitioner from Auburn. Because going through a master’s program takes a lot of time, she decided to find a more flexible schedule at the hospital. She went onto the internal job listing website and found a position in the ER.

“I thought this would be a perfect time for me to transition to the ER. It’s something I’ve always wanted to, and it would round out my nursing experience,” Hardy said.

She moved from endoscopy to the ER at the end of January. She worked for two months in the ER before having to deal with the coronavirus.

“My husband and I joke that I picked a great time to come,” Hardy said.

For the most part, Hardy hasn’t been affected too much by the virus, because she’s still doing her job.

“I’m still doing what I’m trained to do,” Hardy said. “There were a couple of times [when the job became more stressful] when we didn’t know how serious it was going to be, but that was very brief.”

In the seven years she’s been a nurse, Hardy’s favorite part of her job is building relationships with patients.

“It’s probably taking care of the people that don’t always get the best life,” Hardy said. “They come in, and they don’t really expect you to really care about them, but then you take care of them and build a connection with them. Just seeing how much it means to them, that you take time out of your schedule to listen to them and try to invest in them the best that you can. It means a lot to people that don’t have a lot.”

The biggest change in her job due to the COVID-19 outbreak is it is tougher to build connections with the patients because of the personal protective equipment.

“You have your mask on, you have a shield on, you can’t hear them, and they can’t see you smile,” Hardy said. “They just look scared.”