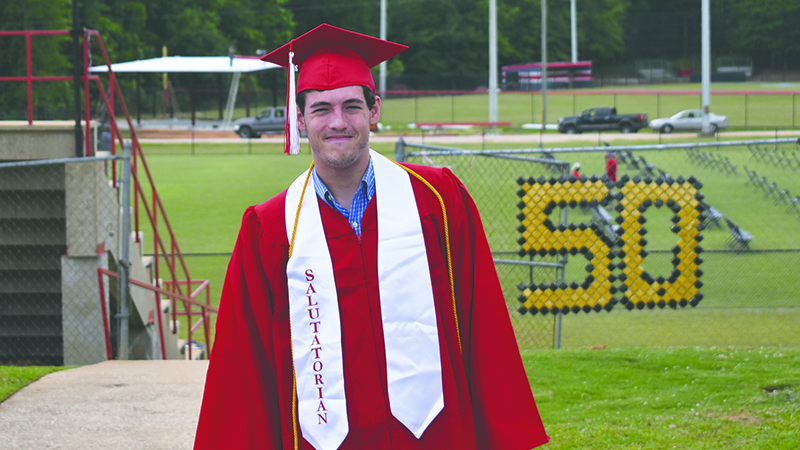 When Springwood School Headmaster Lowrie McCown sent Coleman Hull an email asking if he could join him on a Zoom call on a Saturday morning, Hull had an inclination that he knew what his headmaster was going to tell him.

On May 9, Hull was announced as Springwood’s salutatorian.

“I was happy about it,” Hull said. “It’s nice to see when you’ve worked hard for four years, it pays off. I have a 4.0 [GPA], so I knew that I was going to be close to the top, but you’re never really sure about where you are. When he gave me the call, I was really happy about it.”

Hull has been a Wildcat since the seventh grade. In his five years, the people at the school have been his favorite part.

“It’s not a building or a school — it’s a community,” Hull said.

One of those people was Dale Freeman, a former Springwood English teacher who died from cancer. Hull was in Freeman’s class from the start of his freshman year until Freeman had to step away during his junior year.

“He was always willing to push you, and his class just taught me so much,” Hull said. “His class wasn’t hard just to be hard. He did it because he knew that you could do it, and he wanted to get the best out of you.”

Hull played football, basketball and soccer in high school. He was a key player on each team. In football, he was the starting tight end and one of the Wildcats’ biggest threats in the passing game.

In basketball, he was a team captain and was a key piece of the Wildcats team that reached the playoffs after finishing winless in the 2018-19 season. He finished as the team’s second-leading scorer with 10.7 points a game and second-most rebounds, collecting seven a game.

Soccer was his best sport and favorite. He was one of the most dominant players in AISA. In three years, he scored 55 goals, which was 48% of the teams’ total.

“I grew up playing it. I’ve been playing it since I was 4-feet tall,” Hull said. “It’s something that has stuck with me throughout my whole life.”

Hull was one of the founding members of the Wildcats’ soccer team and had them on pace to make a run in the playoffs for the third year in a row.

“It’s been really awesome to bring everyone together, and the school really rallied around us,” Hull said. “It was super fun to be a part of.”

Alongside his athletics, Hull was involved in several clubs at Springwood. He was a member of Fellowship of Christian Athletics, the senior class president, and the Troup County Youth Leadership program and attended the Alabama Governor’s School. He has received the Lions’ Club Leadership Award, the Regional Math Team Individual High School Award.

His favorite club is the school’s SGA.

“It’s a lot of fun and it’s a great opportunity,” Hull said.

Most of his time away from school work and sports is taken up by his job at Four Paws Animal Hospital in LaGrange.

After Hull graduates on Saturday, he plans to attend Clemson University where he will major in animal science/ pre-veterinary studies.

“I knew that I wanted to do something that I could be active in my local community and help people. When I started to investigate, I figured out if you practice veterinary medicine, that’s a great opportunity to have a local clinic and be able to help people and be known in your community,” Hull said. “I’ve just grown up loving animals, so it all just matched up for me.”