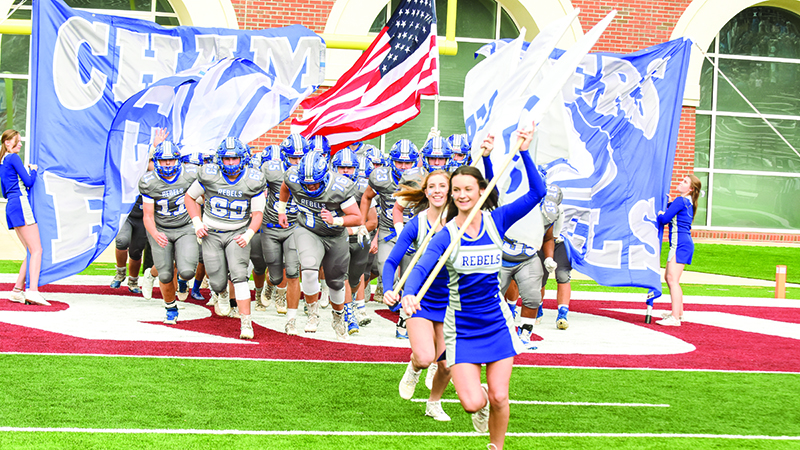 Chambers Academy is one of the three local teams to move up in the most recent reclassification.--File photo

The realignment makes several rivalry games, Springwood-Chambers Academy and Lanett-LaFayette, more intriguing because outside of bragging rights, there is an added bonus of a region win.

Even though they will not be able to go through spring football due to COVID-19, teams finalized their fall schedules if the season is able to start on time.

Below is a breakdown of all six local teams’ schedules.

The Bobcats finished 4-6 in 3A in 2019. They stayed in 3A and keep area opponents Dadeville and Saint James in the reclassification. Both teams soundly defeated the Bobcats, winning 35-14 and 45-14 respectively.

Beulah opens its season on the road at Loachapoka on Aug. 21. It defeated the Indians 14-6 to open the season last year. The Bobcats play their first home game on Aug. 28 against St. Ann-Pacelli High School. The Vikings finished 5-5 and fourth in Class A Region 4 in Georgia last season.

The Bobcats will play their senior night against Goshen, who went 8-4 and made the second round of the 2A playoffs in 2019, on Oct. 16.

They will finish the regular season on Oct. 30 on the road at LaFayette.

The Rebels finished 2019 one win away from repeating as AISA Class A state champions. In the realignment, the Rebels moved up to Class AA.

Chambers Academy opens its season on Aug. 21 on the road at Lee-Scott. The Rebels defeated the Warriors 36-7 to open their season last year.

Chambers will play its first home game on Aug. 28 when it hosts Abbeville Christian. The Rebels won the matchup 45-20 in 2019.

In week three, the Rebels will travel to rival Springwood for the rivalry game and their first region game. Chambers won the 2019 matchup handily winning 50-0.

In their last four games of the year, the Rebels will face three region games. The four teams finished a combined 26-17 in 2019. Ten of the losses were by one team.

The Rebels senior night will be against Banks on Oct. 23.

After winning the 1A State Championship and finishing a perfect 14-0, the Panthers will make the jump to 2A.

The Panthers start the season on the road at Georgiana, who finished 5-6 in 2019. On Aug. 28, the Panthers will host cross-town rival Valley for their first home game of the year. They won last year’s matchup 25-21.

Lanett’s first region game is against B.B. Comer on Sept. 4. The Tigers finished 6-6 and reached the second round of the 3A playoffs in 2019.

On Sept. 18, the Panthers will travel to LaFayette to take on the rival Bulldogs. The Panthers won that game 17-0 in week two last year.

In their last three games, the Panthers will play three region games, playing Ranburne, Randolph County and Horseshoe Bend. The three teams combined for 23 wins in 2019, two of which reached the second round of their respective playoffs.

The Panthers will celebrate their senior night on Oct. 23 against Horseshoe Bend.

The Bulldogs finished 2019 6-5 and reached the second round of the 2A playoffs.

The Juan Williams era begins on Aug. 21 when the Bulldogs host Handley High School for their jamboree.

LaFayette will play its first road game and first region game on Sept. 4 when they travel to Randolph County, who finished 11-2 in 2019 and reached the third round of the 3A playoffs.

The Bulldogs host Lanett on Sept. 18, which will end a streak of three-straight region opponents.

The Bulldogs finish their 2020 regular season with a three-game homestand, where they will play Fayetteville, Vincent and Beulah. The three teams finished a combined 17-16 in 2019.

The senior game will be against Beulah on Oct. 30.

The Wildcats moved down to AA in the 2020 realignment. Springwood will face five teams from its 2019 schedule. Last year, Springwood went 3-2 against those teams.

It starts the season on Oct. 21  on the road at Abbeville Christian. The Wildcats’ first home game is against the defending Class A State Champions Southern on Oct. 27.

The Wildcats homecoming game is on Oct. 19 when they host Cornerstone. Their senior day game is against Lakeside on Oct. 29.

They start the season on Aug. 21 against Beauregard before traveling to Lanett on Aug. 28 for the cross-town rivalry game.

The Rams will play their first region game on Sept. 4 when they host Carver, who finished 4-5 in 2019. That is the first of three-straight region games before a mid-season bye week.

The final game before the bye is Valley’s homecoming. It will host Sidney Lanier on Sept. 18.

After the bye, the schedule appears to get even tougher.

On Oct. 2, the Rams host Eufaula, who went 9-2 and reached the second round of the 6A playoffs. The final two games of the season are at home against Opelika for the Rams senior night and on the road against Robert E. Lee. Opelika finished 11-2 and played in the 6A state semi-final game, while Robert E. Lee went 7-3 in 7A.