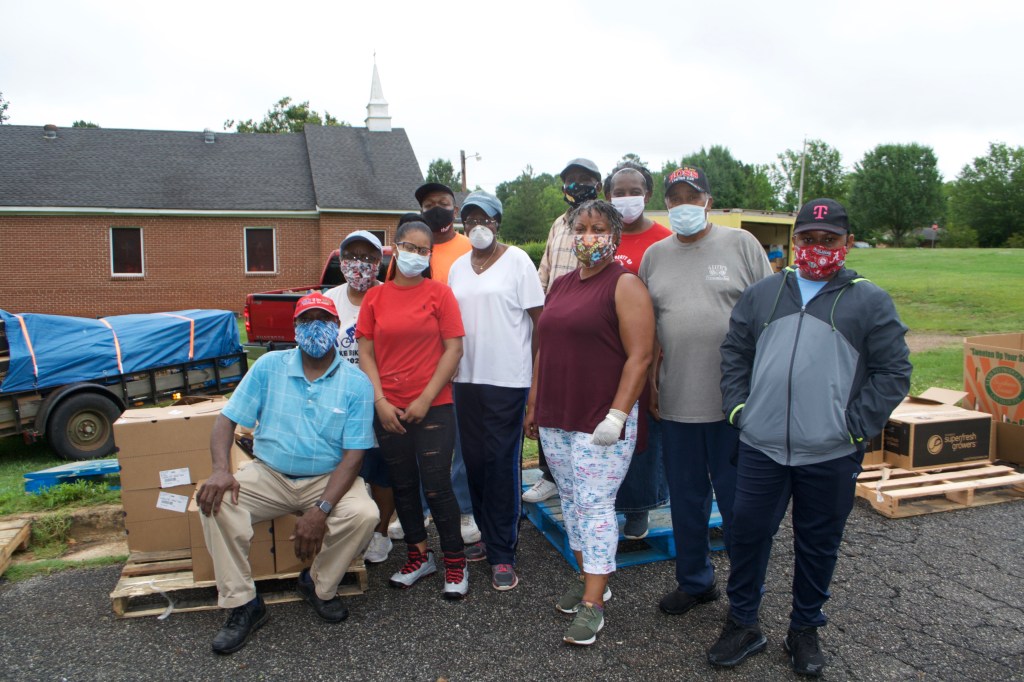 Everyone helping out at Wednesday’s food distribution at Love Union Baptist Church in West Point wore a mask. It was a way of telling people driving up for a food donation that they wanted them to feel safe while a volunteer was placing food inside their vehicle. In front, from left, are Pastor Rodell Poole, Shelby Flakes, Paris Grier, Carrie Wilson, Dena Allen, Rabbit Gates and A.J. Jackson. In back, left to right, are Thomas McFarland, Gary Lipscomb and Wanda Constantine.

WEST POINT — Wednesday morning was a busy one at the Love Union Baptist Church in West Point’s Waterworks neighborhood. Pastor Rodell Poole and a host of volunteers gave away lots of food to a long line of cars on Austin Street outside the church.

“We’ve been giving away food for the past 10 years,” said Poole, “but we’ve been able to step it up over the last four or five weeks. Feeding the Valley brings trucks loaded with food here to West Point. They unload it on the curb for us. All we have to do is get the word out that it’s here, and the cars start coming. On some days, we have had 300 to 400 cars coming by.”

Headquartered in Columbus, Feeding the Valley serves as a centralized source for receiving and distributing donated food, fresh produce and grocery products from national and local retail donors as well as seasonal produce from local providers. Area businesses, individuals, civic groups, schools and churches conduct food drives throughout the year to provide food for its programs. All collected food is inspected and inventoried at the Feeding the Valley warehouse before being distributed.

“They always bring us a little bit of everything, and the distribution goes pretty fast,” Poole said. “It helps to have a lot of good volunteers. They’re not only from our church but other nearby churches such as St. Paul’s and Mount Hermon in Lanett.”

Some of them helped at a food distribution at Rising Grove Missionary Baptist Church in LaGrange on Wednesday afternoon.

“It’s a super group of volunteers,” Poole said. “People don’t have to get out of their cars. They bring the food to them.”

Feeding the Valley has a theme of delivering food to empty plates. The organization is guided by the realization that as many as one-fifth of the children of the Chattahoochee Valley go to bed hungry every night.

“They don’t have to,” reads its website. “Our mission is to feed hungry people.”

Frank Sheppard, president and CEO of Feeding the Valley, said that every $10 donation to the organization can provide meals for up to 60 meals to a family in need.