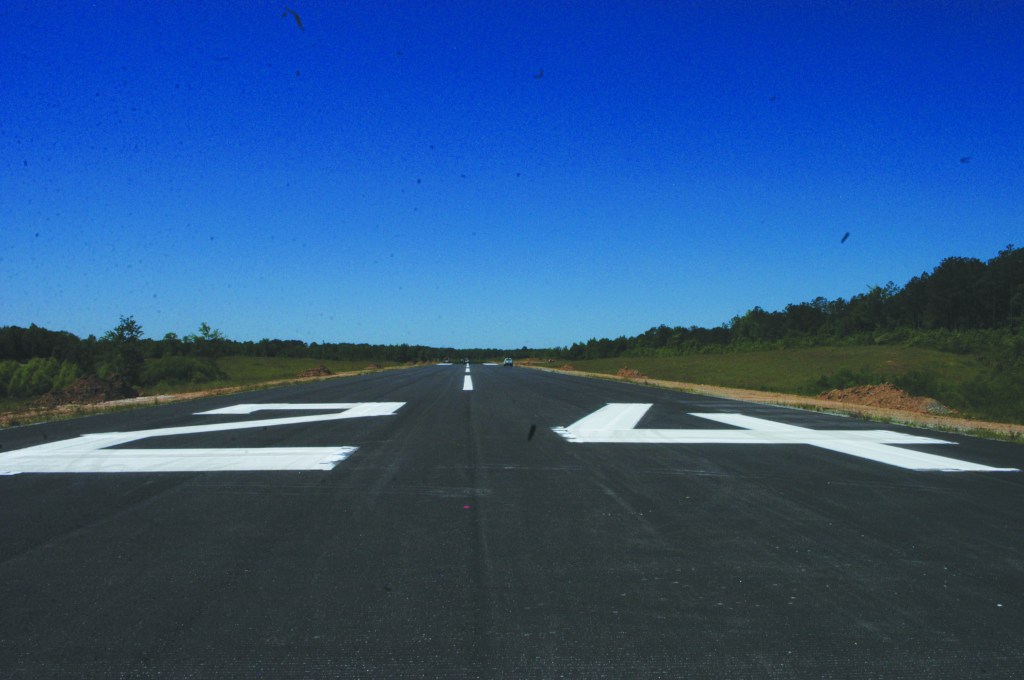 Pilots landing aircraft at the Lanett Municipal Airport will become quite familiar with the number 24. It now marks the start of the northeast side runway. Number 6 will mark the southwest side when that portion of the runway is built later on this year. A 4,400-foot portion of the landing strip is all but complete. All that’s left to be done is the striping and installation of the landing lights. Work will start this summer on the 1,000-foot portion that will lengthen the landing area to more than one mile.

LANETT — While many sectors of the economy have been shut down due to the restrictions put in place due to COVID-19, much in the way of construction has been going on at the Lanett Municipal Airport. The first phase of building a new runway is all but complete. The new asphalt surface has been reviewed by geotechnical engineers and passed with flying colors.

“They told us it was a smooth as any landing surface you could find anywhere in the United States,” Lanett Planning and Development Director Tony Chandler told The Valley Times-News.

Evergreen Erosion Control in Opelika is the project contractor and East Alabama Paving, also of Opelika, is the subcontractor for the asphalt work.

Hydroblasting of Wills Point, Texas is the subcontractor for the striping work. There’s a huge number 24 any pilot landing a plane can easily see.

Once the striping is finished there will be some grading up to the runway edges and the electoral work for the runway lighting.

The footings have been poured for what will be a new 5,400-square-foot terminal. River City Contracting of Columbus, Georgia is doing the work.

The new terminal will have a very large lobby area, a pilot’s lounge, a flight planning room and an office for the Chambers County Development Authority (CCDA).

Most of the old runway has been graded out but a portion will remain to serve as a taxiway to the terminal and hangar areas.

Work will start this summer on a 1,000-foot extension on the southwest side. This will make the new runway some 5,400 feet in length, which is over one mile. It will have the large vertical white bars at the end of the runway and a huge No. 6 for the pilots to see.

Chandler said he has no idea why there will be a number 24 on one side and a number 6 on the other.

“It’s what the FAA wanted, and we’ll see that it gets done,” he said. “We had different numbers on the old runway. Our airport number will remain the same. Lanett is number 7A3.”

Chandler said the work will continue through the summer and fall.

“We hope to be open in January 2021,” he said, “For a town our size, we think we will have one of the better airports in the region.”

Senator Richard Shelby has been supportive of Lanett and Chambers County with the airport expansion. A key factor in getting support for the project is that Lanett can serve as a backup landing location for the very busy airport in Auburn.