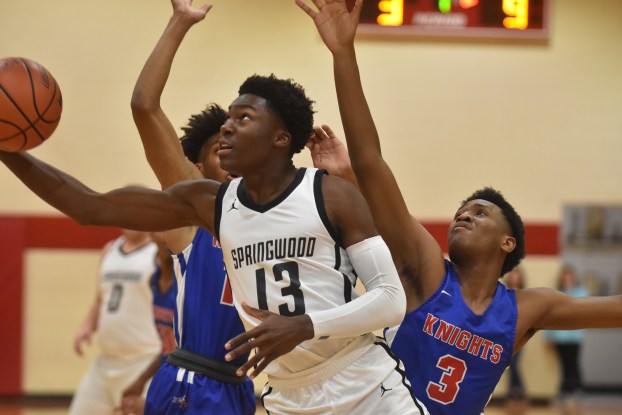 Francis Okeyia is the fifth Wildcat to commit to play college athletics. He is the second to play basketball.

When he came to the United States, Francis Okeyia’s goal was to play college basketball. He officially achieved that goal on Saturday when he committed to play for Brescia University, a National Association of Intercollegiate Athletics school in Owensboro, Kentucky.

“It was really satisfying,” Okeyia said. “Every single day, I was worried about where I was going to go to college or people asking me if I was going to play college basketball, am I going to go home to the UK or am I going to stay here. When I committed, it really relieved some stress. Now, I can just focus on working out. That’s what I came here to do and I’ve done it.”

Okeyia was in the same boat a lot of high school athletes are in, as showcases and camps have been canceled due to the pandemic. Originally, the  6-foot-5 forward was going to play for the Auburn Raptors, an AAU team run by Springwood head basketball coach Lisa Sampson, in order to get more attention, but they were unable to play.

In order to get his name out to more colleges, Sampson and Okeyia sent his tape through the app FieldLevel, which is an app used to deliver players’ highlights to coaches.

“We had to find a way to get these kids out there to college coaches,” Sampson said. “We got highlights out and that’s how Brescia found Francis.”

Okeyia was able to talk with Brescia Head Basketball Coach Brian Skortz and the two were able to build a connection.

“Brescia just connected with him, and they really had a plan for him in their program,” Sampson said. “They were on him. They were keeping connected with him over the past five or six weeks, and I think that’s what really did it for him.”

One of the biggest drawing points for Okeyia was the caliber of opponents that the Bobcats play. This past year, they played Murray State and Jacksonville State, both of which are Division I teams that play in the Ohio Valley Conference, along with other high-powered Division II teams.

“That was one of the main reasons that I wanted to go there was the schedule they play,” Okeyia said. “My whole goal was to get exposure, so by playing teams like Murray State, and performing well, other coaches can see that.”

Alongside talking through the decision to commit to Brescia with Sampson, Okeyia talked the decision over with his father, who lives in the UK.

“He made sure that I didn’t rush it, and that I was 100% sure that I wanted to go there,” Okeyia said. “He wanted to make sure that it was the right place for me.  He did a lot of research on the area.”

While most of his family is still in the UK, Okeyia has family that lives in Dallas. That closeness factor to his family was also one of the drawing reasons that he chose Brescia.

When he steps foot on Brescia’s campus in the fall, it will be the first time Okeyia will be in the state of Kentucky. For a lot of freshmen, that would be a daunting task, but the different steps he’s taken in his high school career have prepared him for that challenge.

The 6-foot-5 forward will play small forward in college. He is the fifth player from Springwood to commit to continuing their athletic career, and the first since Miranda Butler announced that she would attend Judson College in mid-April.

Okeyia was a major force for the Wildcats in his only year at Springwood. He averaged 19.6 points, 11 rebounds and 6.7 assists a game.

“He was our go-to guy. He was able to open up scoring opportunities for his teammates because everyone was keying in on him,” Sampson said. “When you’re on a team with a kid of this caliber, you’re going to up what you’re doing. Every kid on the team stepped up and that’s why we found success. That’s a tribute to him.”

Okeyia was one of the driving factors that transformed a Springwood team, that finished winless in the 2018-19 season to a playoff team in the 2019-20 season.

“That was the most impressive thing,” Sampson said. “It was easy from day one. Obviously, he stepped in and was the guy from the very start. Just a credit to him and his personality as well as his teammates.”

Okeyia finished his high school journey, which took him from the UK to Oregon to Alabama, on Saturday, when he donned his red cap and gown and graduated on Springwood’s football field this past Saturday.

“It was really good. It was emotional obviously. I didn’t think that is how I would end my senior year at Springwood with six feet distancing because of a pandemic but it was good,” Okeyia said.

Shivers puts name in for next head football coach

When Valley head football coach Buster Daniel announced that he would retire from public school and take the same position... read more