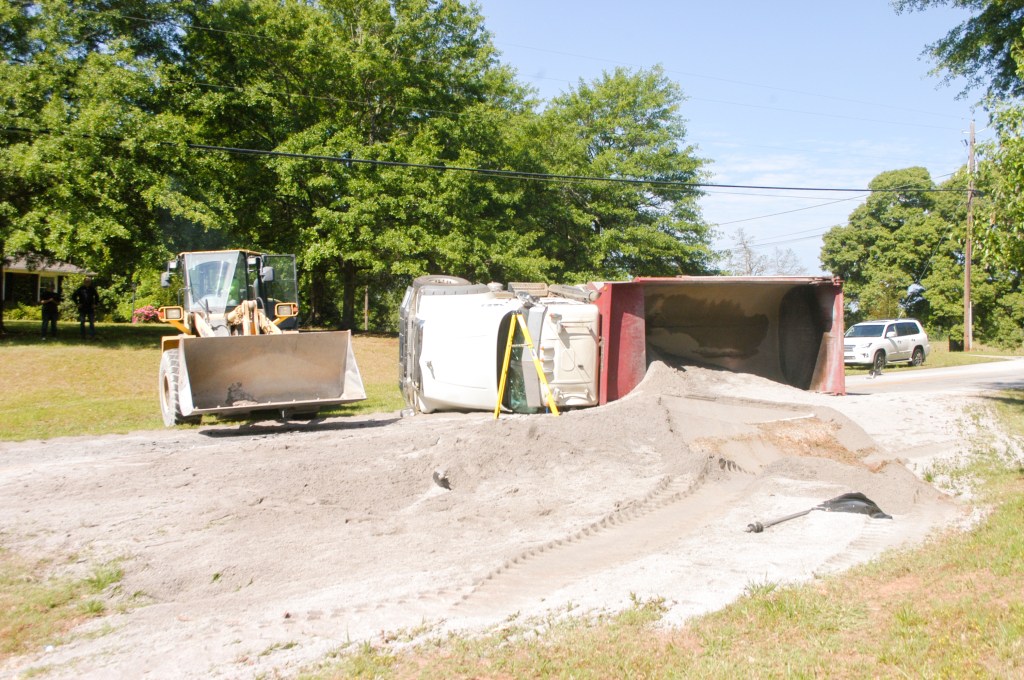 A truck wrecked Monday morning on Country Club Road in Lanett, causing traffic to be rerouted for a few hours. The driver of the truck was taken to the hospital as a precaution.

LANETT — A portion of Country Club Road on Lanett’s west side was closed to traffic Monday morning after a truck hauling material for Chris Clark Grading & Paving’s asphalt plant overturned on the roadway, spilling some contents across the road.

Driver Jimmy Sanders walked away from the one-vehicle accident but was taken to EAMC-Lanier Hospital in Valley for routine observation. Sanders has driven the trucks for Chris Clark for many years and drove them for DuWayne Story before that. Sanders is the stepfather for Lanett High football coach Clifford Story and celebrated a birthday on Sunday.

The truck was hauling what people in the road paving trade call 810. It’s a grayish material that’s quarried near Wadley and pounded into a sand-like state.

It’s ideal for making the kind of asphalt that goes into the wearing surfaces in streets currently being paved in Lanett and Valley.

Driving east from LaFayette toward the asphalt plant, Sanders had topped the hill just past Hillcrest Cemetery when he apparently ran off the right side of the road, demolishing a mailbox and losing control of the big truck.

The truck turned over on the driver’s side. Passersby stopped to help, getting Sanders to crawl out of the cab and to sit on the upright passenger side. Nearby resident Greg Ford brought a ladder to the accident scene and Sanders was able to climb down on it. He then walked over to rest inside a Lanett ambulance that had arrived and was later taken to the hospital.

Using shovels, Lanett firefighters put some of the spilled 810 onto a small amount of diesel fuel that was leaking from the overturned truck.

A couple of front-end loaders from the asphalt plant got the truck on its wheels again. While one of them used a big chain to pull on the truck’s right side, the other one used its big bucket to push on the other side.

With the two loaders working together, it took only a few seconds for the big truck to be upright once again. The 810 was then cleared from the roadway and the road was reopened to traffic.