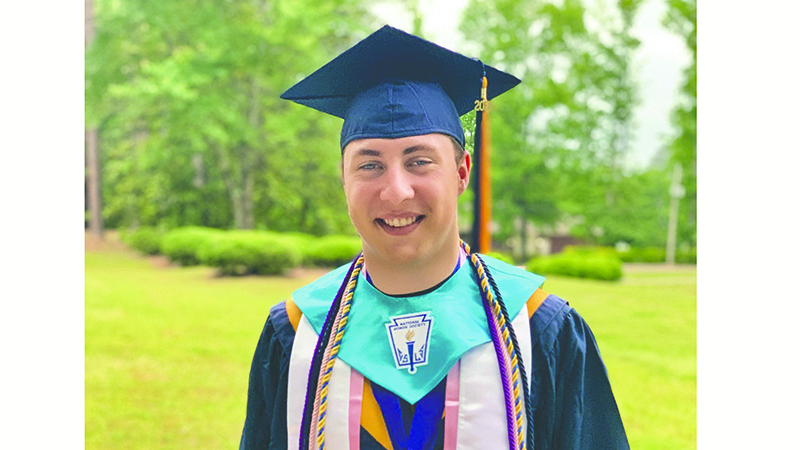 When Troup High announced its honor graduates during a Facebook live video in April, one local student watched with anticipation hoping to hear his name as a distinguished honor grad.

West Point resident Collin Sanders said he was overcome with emotion and excitement when he heard that he had earned the top spot in his class as Troup High’s 2020 Valedictorian.

“I was truly shocked,” Sanders said. “I had worked hard to keep my GPA high and was working toward my goal of being a distinguished honor graduate. Being valedictorian of Troup High is such an honor, especially considering all the smart and talented students in our class. We are all having a tough senior year due to the pandemic, so there is emotion that comes with that as well. I’m excited, but it’s a little bittersweet considering how our senior year is ending.”

Sanders, the son of Craig and Andrea Sanders, not only earned the top spot for his 2020 class but was also named Mr. Troup High at a ceremony in February. In addition to maintaining all A’s throughout 12 years of school, he is an active community volunteer, having logged more than 300 volunteer hours over the past two years. He also worked a part-time job and participated in numerous extracurricular activities.

Sanders has been a member of the Troup High marching band since 8th grade, was trumpet section leader for two years and drum major his senior year. He is also active in theater, having been in eight school productions and more than 26 performances with the New Horizon Community Theatre in West Point.

He is a member of the Beta Club, National Honor Society, Student Council, Key Club, Interact and was a Troup High Ambassador. He served as a Georgia Secretary of State Ambassador and a Georgia Senate Page. As a 7th grader at Long Cane Middle School in LaGrange, he was elected and served as Jr. Beta Club Vice President for the state of Georgia. Additionally, he is a member of the choir at West Point First United Methodist Church.

While excelling in academics and leadership roles was important to him, he said he is most proud of the volunteer work he has done within the community and around the state.

“Giving back to the community just feels good and is the right thing to do,” Sanders said. “I learned servant leadership early on as a member of the Jr. Beta Club and have carried that desire to help others with me into high school.”

Among his community efforts, he led a cleanup day in West Point last spring with local leaders and Kia employees, and has worked with many organizations that benefit at-risk kids, including the Salvation Army, City of Refuge in Atlanta, and the Troup County Prevention Coalition. He has spent time reading to local elementary school kids and sharing his love of theater with younger actors as a counselor at New Horizon’s summer theater camp. He also loves working with the students in Troup High’s exceptional education department.

“I’m thankful for the gifts God has blessed me with,” Sanders added, “and I want to use them to my fullest potential.”

Sanders is the grandson of Ann Isbell Rogers, Connie Sanders, Calvin and Carol Sanders, and the late Stan Isbell and Donald Rogers, all of Thomaston, Ga. He will attend The University of Georgia this fall as a Charles McDonald Brown Scholar, where he will study Chemistry and Pharmaceutical Sciences. He is also currently in the audition process for the UGA Redcoat Band.