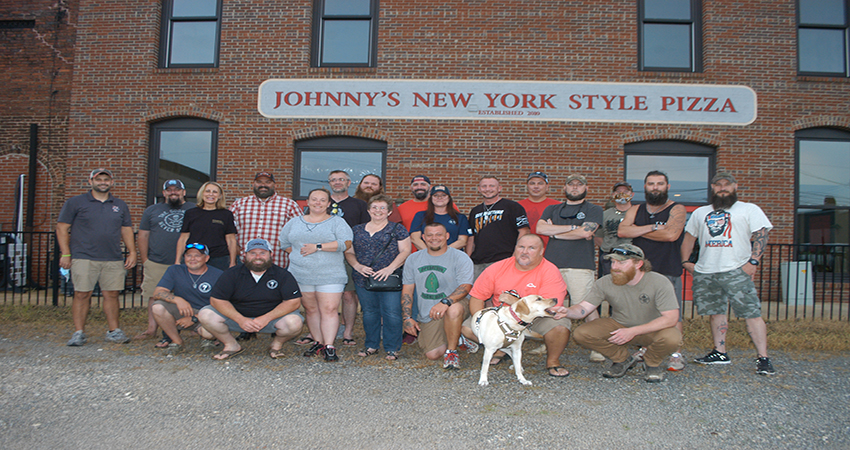 FIVE POINTS — This weekend, 24 veterans from the Iraq and Afghanistan wars gathered for four days of mental, emotional, physical and spiritual healing deep in the Alabama woods. They were taking part in Healing Heroes hosted by Rock Fence Farm, located on County Road 160 between Five Points and Milltown. Those from the Southeastern states drove to the farm, but those from more distant locations such as Buffalo, New York, Phoenix, Arizona, Colorado and Nevada were flown in. The event was a partnership between the Barn at Rock Fence and the American Military Family.

“It’s an extended wellness weekend,” said Scott Smith of the Barn at Rock Fence. “Throughout our four days together, we have been supplying activities such as clay shooting, fishing, boating and ATV riding.”

The fishing took place in a horseshoe-shaped pond on the 489-acre Rock Fence Farm site. A large tent was set up in the pond’s peninsula. Underneath it, the veterans enjoyed breakfasts of eggs and pancakes before enjoying activity-filled days. In the evenings, they gathered in a circle around a fireplace and shared stories of how they have dealt with post-war life.

The kickoff event was an 8 p.m. CST dinner at Johnny’s Pizza in downtown West Point.

“This town has a lot going for it,” said one of the veterans. “You have a college right here in town (Point University) and a major auto plant (Kia). Must be nice to live here.”

The day time activities included boat rides on Lake Wedowee and riding on four-wheelers in the Indian Mountain ATV Park in Cherokee County.

Debbie McElhinney, founder and CEO of American Military Family GYB (Got Your Back), said that she has been doing this kind of work for 16 years and was inspired to help veterans after living through what her Vietnam War veteran brother had gone through.

“When he got back from the war, he was nothing like the man we knew and loved before he went there,” she said. “Vietnam was bad enough, but when he got back to the U.S., he was told it would be best to take off his uniform and put on civilian clothes, that men in uniform were frequently cursed at, spat on and called baby killers. My brother was never the same after Vietnam. I know there were many others like him.”

It’s not the same situation with the men who are returning from Iraq and Afghanistan. The big difference being the all-volunteer army. There was a draft during the Vietnam War, and all sectors of society were affected.

“Less than one-half of one percent now service,” McElhinney said.

The war demons are still there. It’s just a smaller slice of the population that’s affected.

“Some of them come home to spouses who don’t know them anymore,” she said.

Some come home to women who really didn’t love them in the first place.

“There were hasty marriages before some men went to a war zone,” McElhinney said. “Some women married for the survivor rights. If their husband was killed, they’d get $450,000. I know. I helped bury some of those men.”

Some of the men present this weekend have harrowing stories to tell. Justin Patterson, for example, was blown out of a Humvee while serving in Iraq. It’s a miracle he’s still alive. Most of the men who were riding with him that day are not.

The healing part of the weekend comes from the fact the men have had similar experiences.

“They talk the same language,” McElhinney said. “They have been there and done that. When they talk about situations they were in, they are with men who can relate to it.”

Many veterans can’t make the adjustment back to civilian life. Some struggle with mental illness, drug addition, alcoholism and homelessness. There’s a high suicide rate among veterans who cannot adjust.

When asked about the mission of American Military Family.org, McElhinney poses a hypothetical situation.

“What would you do if you received a call from a suicidal veteran who tells you he has no family, no home, no job, no money and suffers from Post Traumatic Stress Disorder (PTSD) and has had a Traumatic Brain Injury (TBI)?” she asked. “When American Military Family receives these calls, we do everything humanly possible to get these veterans the help they need physically, mentally and/or financially.”

“Naturally healing our nation’s veterans through the great outdoors is our mission,” said Scott Smith. “We provide a worry-free environment of hope for these heroes.”

In 2018, the Rock Fence property was placed under a conservation easement, thereby protecting its land, wildlife and natural resources.