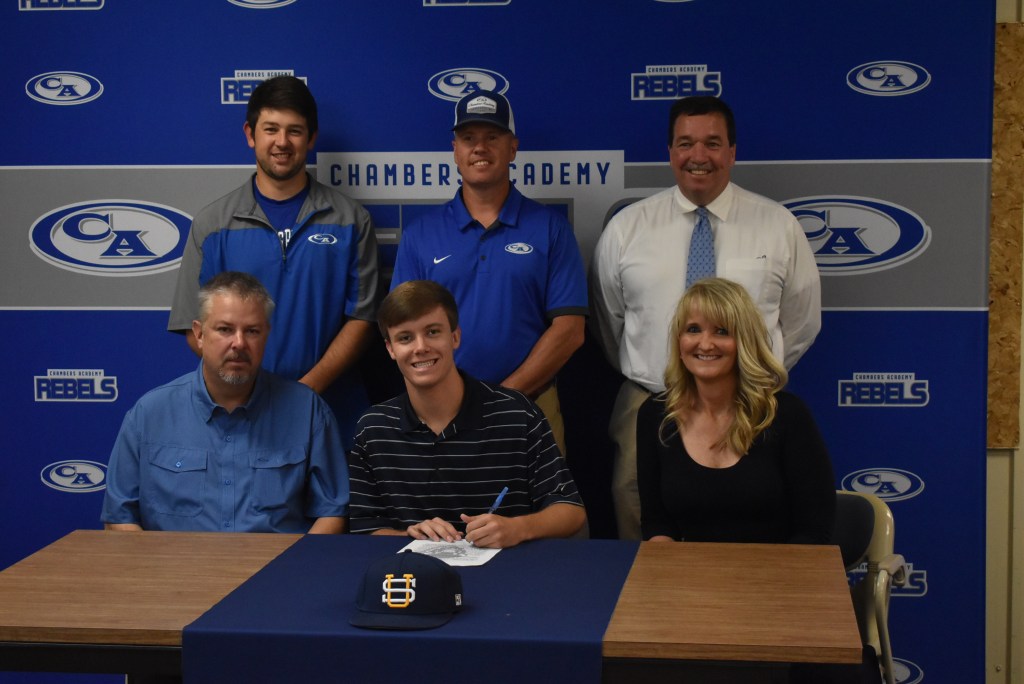 Caydon Smoot had to decide which sport he would play in college, and he made his choice official on Tuesday when he signed his letter of intent to play baseball at Southern Union.

“It’s a good day. To see all the years of hard work and being in the yard throwing a ball, it’s taken a long time but it feels good that it’s finally here. It’s rewarding for it to finally pay off,” Smoot said.

Smoot made his final decision to play baseball instead of football in March. It was a tough decision, but he ultimately chose baseball just because of his natural love of the game.

“Ever since I can remember, I’ve been throwing a baseball in the yard,” Smoot said. “It’s just one of those sports that if you don’t play it, it feels like you’re not doing right. Football is a great sport, and I’m really going to miss football, but for me personally it’s just the game of baseball. I think it’s the greatest sport on earth.”

Smoot is a 6-foot-3 left-handed pitcher with great control of the strike zone. He is able to locate his pitches and the natural movement on his pitches helps add some break. He is a three-pitch guy throwing a fastball, changeup and a curveball.

“The fact that I’m left-handed, I have natural movement on my fastball that will curve left,” Smoot said. “I’m not going to blow you away with the fastball, but I will hit my spots and get outs with contact.”

Smoot has started for the Rebels ever since he transferred in as a freshman. He can play first base, but he has been special on the mound. The last three years, he was the Rebels ace and go-to guy for head coach Dillon NesSmith.

“It [signing] couldn’t happen to a better kid,” NesSmith said. “He’s an absolute dog on the mound. He’s the ideal pitcher in any situation. He’s been our go-to guy for the last three years. He’s a great kid, but when he steps foot on the mound, he just turns into an assassin. It’s just that bulldog mentality. It’s unmatched.”

In his shortened senior year, Smoot was 5-0, throwing 35 innings. He allowed just six runs off nine hits, earning a 1.56 ERA. Three of his five wins were shut outs, one of which was a no-hitter.

Going into his first year at Southern Union, Smoot isn’t sure what role he will play for the Bison, but his goal is to help the team in whatever role he is put into.

“I hope to be a starter, but I told them I’ll play anywhere,” Smoot said. “Wherever he [Southern union baseball coach Aaron Everett] needs me to play, I’ll play, whether it be a starter, reliever or closer. Whatever way I can help the team win, I’ll do.”

Southern Union stuck out to Caydon for a couple of reasons.

The big reason is he will be able to focus on baseball and school, so he can achieve his dream of playing baseball at a four-year college.

“It’s in a small town, so there’s not a lot of distractions,” Smoot said. “Baseball will be all I’m doing. I’ll be getting better and hopefully get to where I want to get to a big university one day. I’ll just be working on my craft, and gain not only that, but it’ll make me a better person.”

The University of Alabama is his dream school.

The other reason is that it is located in Wadley. It is about the halfway point between his house in LaGrange, Georgia and his twin brother Brody, who will play football at Faulkner.

NesSmith, who coached both brothers in football and baseball, knows the future is bright for the brothers.

“They are a coach’s dream,” NesSmith said. “They’re wonderful kids. We kind of came in together. Its’ been a lot of fun. It almost brings a tear to my eye to see these two guys go. They’ve been like little brothers to me.”