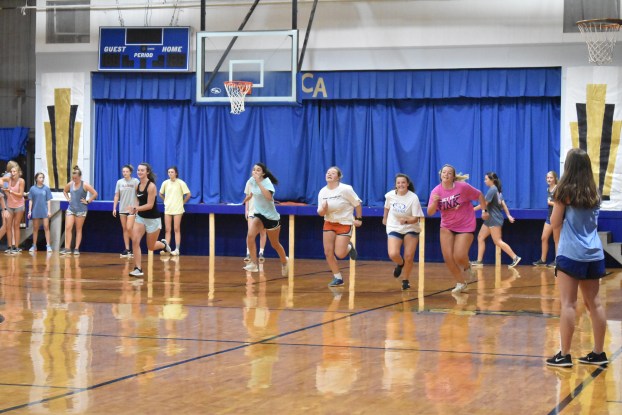 Chambers Academy seniors run sprints during conditioning on Thursday. The program meets three times a week for an hour and a half each meeting.

The offseason is the time for athletes to get their bodies in the right condition for the season. Due to COVID-19, schools have been forced to delay this process. On May 21, Alabama Gov. Kay Ivey allowed for athletics to start practice, including summer workouts.

On Monday, Chambers Academy started its summer conditioning program for its girls’ athletics program. It was the first time that the school was able to come together since dismissing class in mid-March.

“It’s really refreshing to one, be back and see all these smiling faces and two, they really worked hard this week,” Chambers Academy girls head basketball coach Jeff Hines said. “[The first thing I said to them] is the best part of this day has been able to see all of you. As coaches, we missed that time. As coaches, we form relationships with our kids, and we missed that time.”

“I’ve talked to coach [Randy] Bonds, the volleyball coach, coach Owens and Ms. [Emily] Milford, our cheer coach, and we are all in agreement that our core has to get better,” Hines said. “I think  our workouts this summer are really going to enhance that for all of our young ladies.”

The Rebels will meet three times a week for approximately an hour and a half. The time is split up into using weights, strengthening their core and running sprints.

“It’s been a major thing in our workouts, and I’ve felt it the last few days,” senior Brandalon Rombokas said.

“The past few days have been so hard getting out of bed, but it’s worth it,” senior Abbie Morgan added.

The workouts are for all girls sports at Chambers Academy, and the participants range from incoming sixth-graders to the seniors. There are 45 girls participating in the workouts.

“I love it,” senior KK Chambers said. “It’s been really rough with the coronavirus, we really haven’t been able to do anything, so coming back out here has been good to see all the girls.”

Hines and the Chambers Academy staff will have the workouts going throughout the summer, something the girl’s teams haven’t been able to consistently do for the last several years.

“We haven’t had this good of a program for a while,” Rombokas said. “We’ve always just done it for a few weeks and then we’re done. It’s nice to build our muscles and prepare.”

During the school year, Chambers Academy will have a girl’s varsity athletics class. The workouts will continue into the fall, adjusting for the girls that are in season or preparing for their season.

“We’re going to build up a lot of muscle, and we’re putting in a lot of hard work. I’m excited to see where it goes,” Morgan said.

It was a when not an if before  LaFayette senior guard Tae Burton chose which college he would continue his... read more