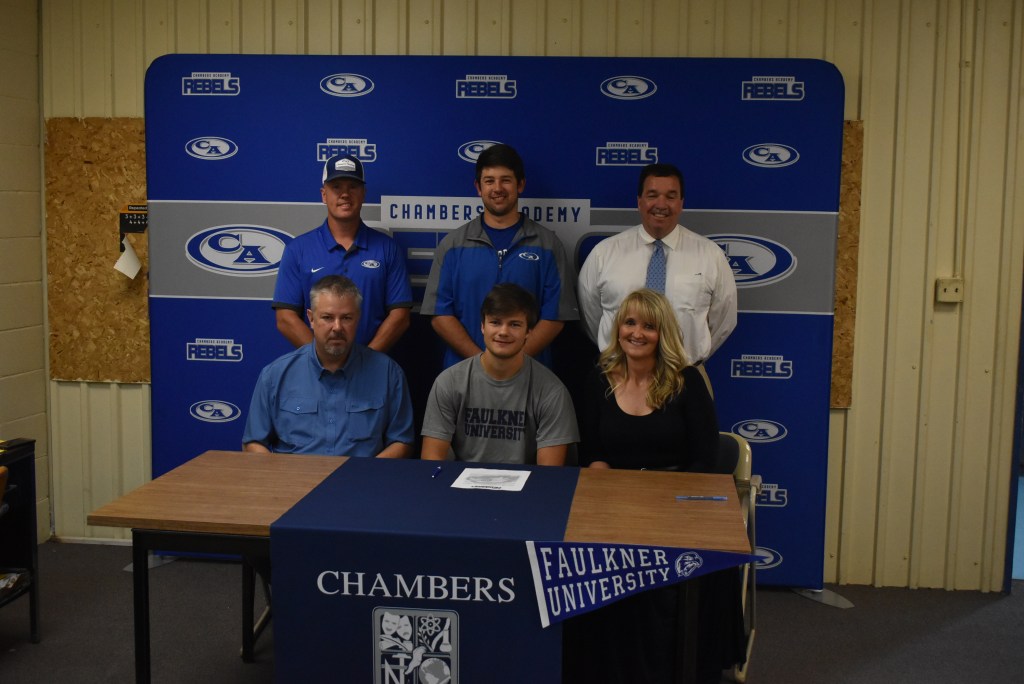 Chambers Academy senior Brody Smoot signed with Faulkner University on Tuesday. He is one of three Rebels to play football for the Eagles next year

A week after he decided to commit to Faulkner to play football, Brody Smoot made his decision official on Tuesday, when he signed his official letter of intent in front of his family, coaches and headmaster.

Smoot was a key for the Rebels on defense. The 6-foot-1 outside linebacker was consistently disrupting plays for opposing teams, finishing with 13 sacks and a pair of forced fumbles his senior year.

“Brody has been a big part of what we do, and he’s actually kind of transformed our defense a little bit,” defensive coordinator Dillon NesSmith said. “We usually have bigger, not as fleet-footed guys playing defensive end, where he’s played. He’s got great moves coming off the edge. All of that is self-taught because it goes against what we do defensively because we generally sit back.”

In his last two years as a Rebel, Smoot totaled 100 tackles and 21 sacks.

“He took that job of being our pass rusher and our edge setter, and he did a really good job at it,” NesSmith said. “He’s going to be extremely hard to replace him.”

Faulkner stood out to Smoot for a couple of reasons.

The first reason is that it is a Christian university, which is something that Smoot really liked about the school. The second is the team is trending in the right direction. The Eagles finished 3-6 in 2019, but they were going through a coaching change and they had depth issues.

“I just feel like they’re trending in the right direction after this year,” Smoot said.

The third reason was the closeness to his home in LaGrange.

“Just being close to family was something that I took into account,” Smoot said. “With this pandemic going on, I wanted to be close to home. I just want to be able to see my people.”

Alongside Smoot, the Eagles will have two other members of the 2020 Chambers Academy senior class, as offensive linemen Gabe Brooks and Jake Waldrop had already committed to play for Faulkner.

“It’s been cool,” Smoot said. “After four years of working hard, it’s cool to see that we can go to the same place and do the same thing again, make championship runs and have a good time. I think we’ll all three be successful.”

Since Brooks and Waldrop will both play on the offensive line at Faulkner, Smoot will be able to go up against at least one of the two in practice every day.

Defensive end was one of the Eagles weaker positions depth-wise in 2019, so Smoot will be vying for playing time quickly. A part of his game that will help him stand out once he gets to Montgomery in the fall is his speed off the edge.

“They [the Faulkner coaching staff] like my speed, and they just think I can help off the edge,” Smoot said. “I can play defensive end or outside linebacker. I’m basically a hybrid and they like that. My speed will help me and if I get a little more strength, that will help me even more.”