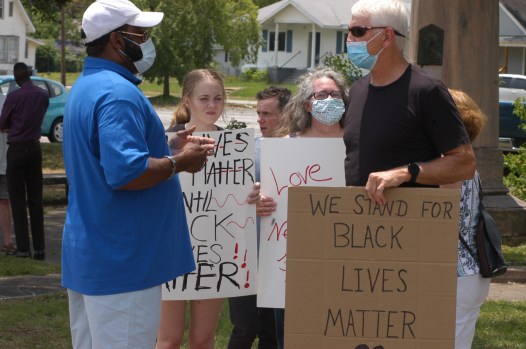 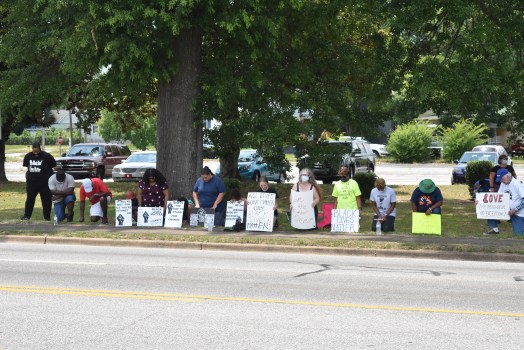 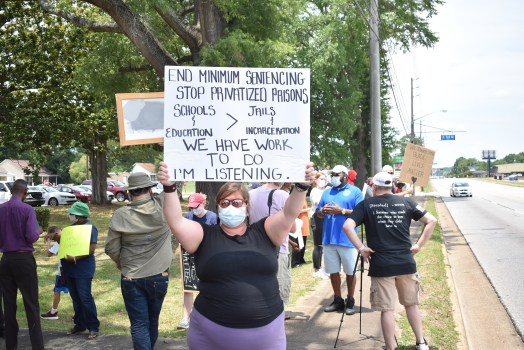 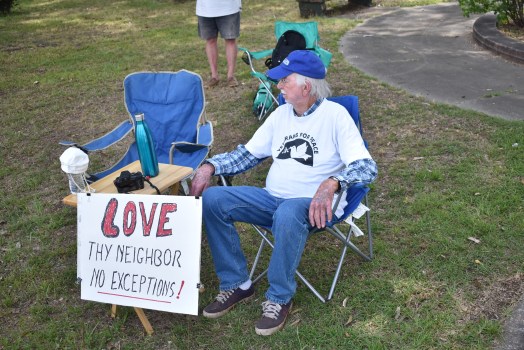 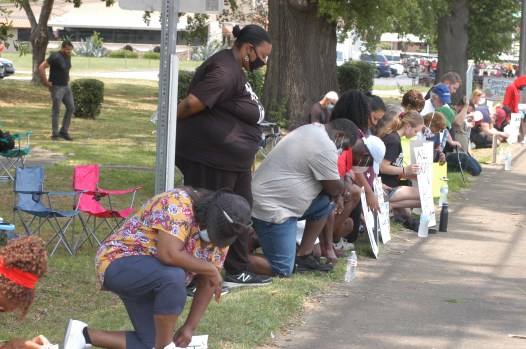 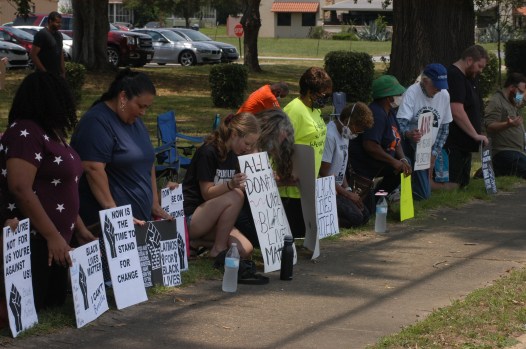 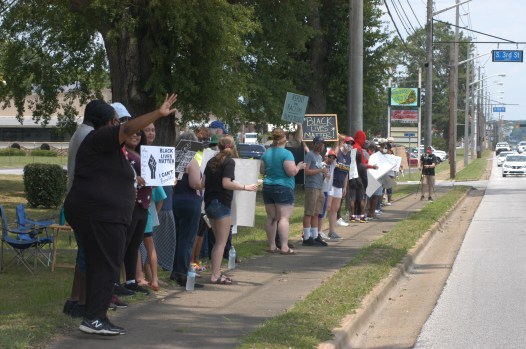 LANETT — A diverse group of close to three dozen people took part in peaceful protesting Sunday afternoon along Highway 29 in front of the Lafayette Lanier Monument across from the Lanett Mill site. The group included people of different races and ages.

The protestors began gathering during the noon hour and grew to more than 30 people for a 2 p.m. prayer service. They knelt on one knee for eight minutes and 46 seconds as Stanley Roberts called for peace, justice and freedom for all mankind.

Roberts later told the media present that he had been taking part in civil rights activities since he was 16. He said that he was hoping for a bigger turnout but was pleased to have the crowd that was there.

“I like the diversity we have here today,” he said. “This is part of the Black Lives Matter movement, but we are seeing something else taking place at the same time. There’s another revolution. It’s not just black people who are asking for justice. All races and nationalities are asking for it.”

Roberts said that justice involves many things and is much more than black men being killed by police.

“It’s also about black-on-black crime and mass shootings. It breaks my heart every time I think about the Sandy Hook shootings and what happened at the Mother Emanuel Church in Charleston,” he said. “We want changes. We don’t want to defund the police, but we definitely want some reforms. We don’t want no-knock warrants and chokeholds. We think police departments should reflect the communities they are serving. I’d like to see police develop relationships with those they are serving. It would be good if they could play basketball with black youngsters.”

Roberts said that news reports of protesting had shown some bad things such as buildings burning, rubber bullets and tear gas being fired at protesters and people being beaten by police with billy clubs. There was also a good side, too. There’re videos of officers embracing peaceful people and walking hand-in-hand with children, he said.

Roberts said he wanted to thank everyone who came out.

“I want to thank all the passing cars who honked at us and shouted encouragement from their rolled-down windows,” he said. “I especially want to thank Matt White, who passed out lots of bottles of cold water. It’s a hot day today and that helped.”

Dwinderling Higgins, president of the local chapter of the Alabama New South Coalition, held a sign saying “Love One Another.”

“Our motto at the ANSC is to make change to better our lives,” she said. “We want change that benefits all people.”

“If you are neutral in relation to injustice, you have chosen the side of the oppressor,” the sign read.

The children held signs saying “When black lives matter, all lives will matter,” “Don’t be on the wrong side of history,” “Now is the time to stand for change,” and “I can’t breathe.”

Jim Allen, editor of The Fredonia Times, wore a Veterans for Peace shirt and a “Make Racism Wrong Again” hat.

“We are peacefully standing for justice for all,” said Judy Collins. “We will be kneeling in prayer and calling for peace and the end of violence. We would like for this little group to start a Peace in the Valley movement.”

“We want a peaceful way of shining a light on what’s going on,” she said. “This is not a back/white issue. It’s a justice issue. We are standing for justice for all people.”

Holly Carey, who teachers Biblical Studies at Point University, was wearing a blue and gold Skyhawks shirt. Others showing their support were Dr. David Fagan and his wife, Terry; Pastor Matthew Thrower of Refuge Point Church; retired engineer George Barrow, who is heading up the restoration of the New Hope Rosenwald School, and long-time Lanett sports fan Jermaine Brock, who said “All this reminds me of that Sam Cooke song back in 1963 ‘A change is coming.’”

Roberts said the current movement owes a debt of gratitude to the civil rights pioneers of the 1950s and 1960s.

“Black Lives Matter gives credence to what they did,” he said. “Something good has rubbed off on us. We won’t forget those who took part in that movement. We are following in their footsteps.”