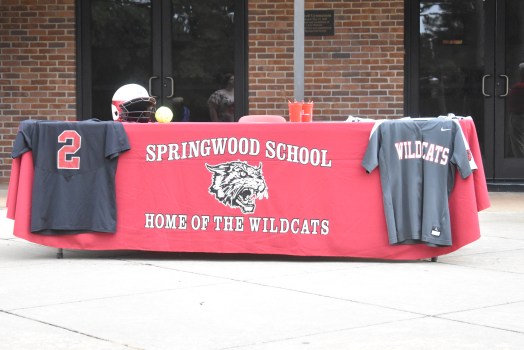 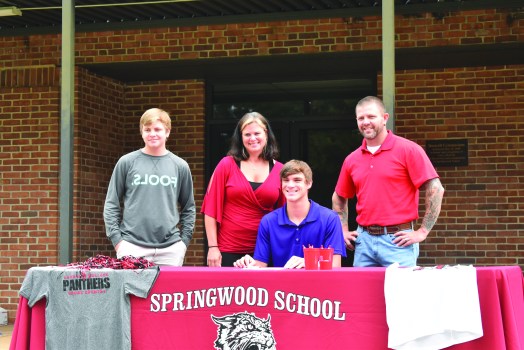 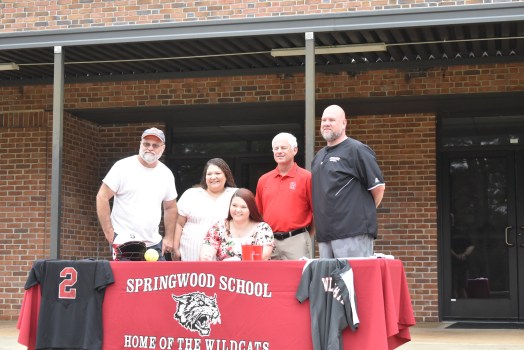 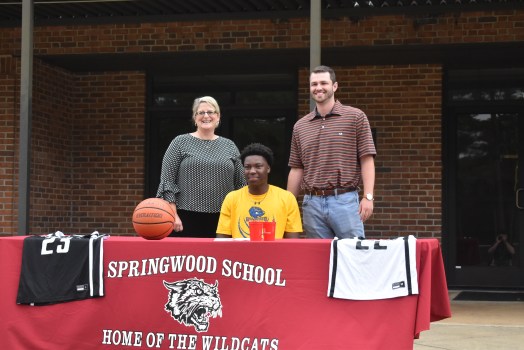 When COVID-19 shut down schools, the 2020 senior class was left with a ton of questions. Would they be able to have graduation? Would they have prom? Would their athletes be able to hold a signing day or would they just commit?

Springwood made sure their seniors would be able to have at least two of those three events, holding a graduation ceremony in late May and holding a signing day for three of its athletes on Tuesday. Francis Okeyia, Miranda Butler and Chalyb Lenker signed Tuesday to their respective colleges.

Butler signed to play softball at Judson College, a private Baptist college in Marion. She committed in late April.

“I didn’t think it was going to happen,” Butler said. “I honestly didn’t think that I would be playing college ball. I thought after my senior year here at Springwood, I’d be done with softball. I was really happy when [Athletic Director John Gartman] told me that I could sign today at school.”

“You have the people that have been supporting me the most through my life,” Butler said. “It’s great to have everybody that supports you and loves you the most be at something that is so special to you.”

While she was signing, Hannah said that he was excited to get Butler on campus.

“Miranda came out to a tryout for us this past fall, and we knew immediately that we liked her,” he said. “You always love to get a good pitcher.”

Lenker signed his official letter of intent with LaGrange College, where he will be a member of the school’s cross country team.

Lenker chose LaGrange College for two key reasons. The first is that it is a smaller campus, so he wouldn’t have to worry about getting lost trying to find his classes.

“A big campus in my first year just seemed too much because I was afraid I was going to get lost with how many classes I was going to have,” Lenker said. “Plus the people there were really nice, and I enjoyed talking to a lot of them.”

The second reason was he would be close to home.

As a senior, Lenker played football and basketball while running cross country. Now, he is able to focus his efforts into training for cross country.

“It’s nice to just focus on cross country for a change,” he said. “Doing football and cross country at the same time, it was really stressful, thinking that I might be sore from the game and not being able to do my best for cross country.”

Lenker was supported by his parents and his brother. His mother, Missy Piper, was his coach at Springwood.

“I don’t think I’ve ever met a more dedicated athlete,” Piper said. “He would leave a football game, run the next morning and finish in the top-10 in cross country. He didn’t really get to train much for it, but he was still good enough to get a scholarship.”

Okeyia signed with Brescia College, an NAIA college in Kentucky.

Since his family is still in the United Kingdom, Okeyia was supported by head baseball coach Lisa Sampson and assistant coach Michael Jenkins.

“They’re really good support because obviously, my family isn’t here with me and they’re kind of my family,” Okeyia said. “Knowing they were with me the whole entire time, it’s nice.”

Okeyia was especially thankful for Sampson pushing him hard in practice.

“I would be working a  lot harder than I should be working because I know the games were going to be much different,” Okeyia said. “She definitely helped me broaden my game and my mentality as well.”

Okeyia will be playing a mix of the small forward and the shooting guard positions at the next level, so he’s been working on handling the ball and his offense.