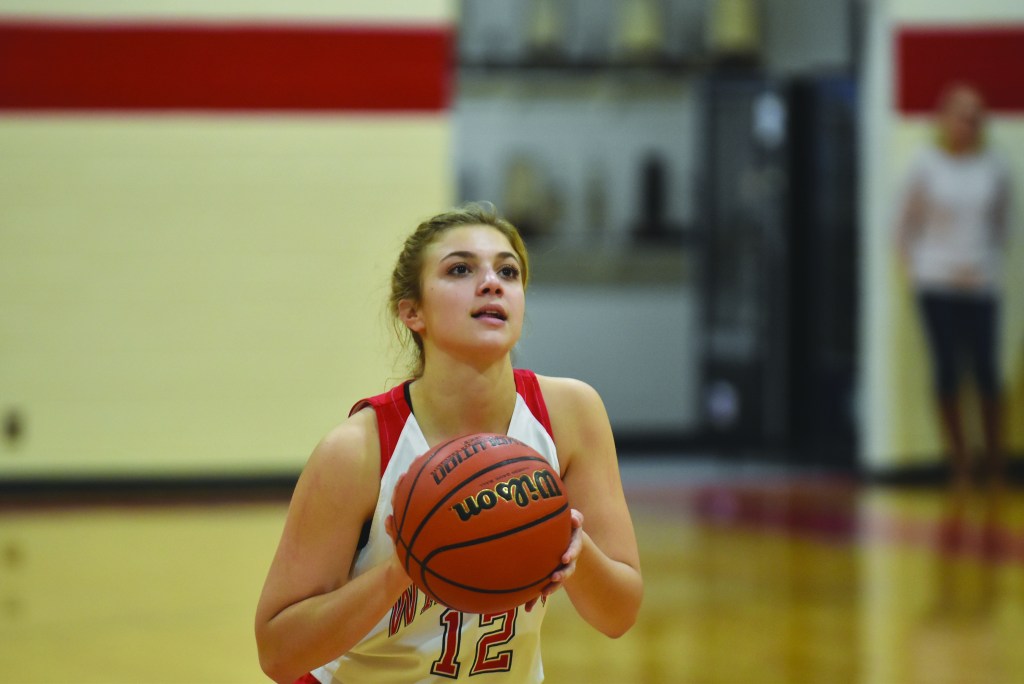 Springwood rising senior Lucy Spivey has been rehabing a torn ACL and sprained MCL since early March. Spivey is a member of the Wildcats cheer, basketball and softball teams.--Photo by Cody Estremera

February 4 is a day that will always stick with Springwood rising senior Lucy Spivey.

On that Tuesday, the Springwood girls basketball team traveled to Dothan to play Northside in the first round of the AISA playoffs.

In the third quarter of the tightly contested game, Spivey was going for a loose ball. She collected the ball and tried to jump stop and began to try to pivot. Instead, when she landed, her left knee popped and she went to the floor in pain.

“I didn’t think it was my ACL or anything,” she said.  “When I went down, I was just holding my knee, crying and screaming.”

After laying on the floor for a couple of minutes, Spivey tried to stand so the game could continue. When she tried to put weight on her knee, it buckled. Springwood boys’ basketball players Francis Okeyia and Tyrese Ferguson carried her off the court.

“I hit the ground, and I thought ‘I have a softball game Saturday,’” Spivey said. “I was like softball? Is that going to be happening?”

She was taken to the emergency room at Flowers Hospital, which is 10 minutes away from the school.

There she was told that she didn’t break anything but that she would need an MRI. She had her MRI done on Feb. 10 and found out her results that night. Her MRI showed that she had torn her ACL, meniscus, sprained her MCL and fractured her femoral conduct.

“She had to tell me probably 10 times because I was just in shock,” Spivey said. “There was just so much wrong with it, and I didn’t think that I did that much. I thought that I had just tweaked it.”

Before her surgery, in talking with her surgeon Dr. Kurt Jacobson at the Hughston Clinic in Columbus, Georgia, Spivey’s big concern was being able to return for her final cheer camp, which normally would take place in July. Her hopes of returning for the cheer camp and AISA All-Star tryouts were dashed.

“He told me that I’m done for at least six months, and I was devastated. It took me a long time to wrap my head around it,” Spivey said.

Spivey had her surgery on Feb. 28,  two and a half weeks after she received her MRI results.

“Surgery was the most painful thing I’ve ever experienced,” Spivey said.

She arrived at Columbus by 8 a.m. to fill out the paperwork before she was transferred to the Hughston Hospital in Phenix City. The procedure started around 2 p.m., and she was in recovery two hours later.

To her, the scariest part about the procedure was getting the nerve block. For Spivey’s surgery, the anesthesia needle, which is normally about 15 cm long, was inserted into her hip to help deal with the pain from the procedure.

“The nerve block wore off the next day, and I couldn’t even think about moving it,” Spivey said. “Just getting up was impossible. It was excruciating.”

In the procedure, Jacobson also worked on her IT band, which is the ligament that helps extend, abduct and rotate the hip.

Two weeks after her procedure was the first time she tried to walk on her leg, which was much earlier than she was supposed to because of the fracture. It didn’t go the way she planned.

“That was stupid,” she said. “It never ended up great for me.”

Her first day back at Springwood was nearly a week later on March 5. She went in the morning but needed to go home after third period.

“I was trying to crutch to my next class and I swung my leg and my whole IT band was on fire,” Spivey said. “I just started crying and I called my mom to come get me. That was my first day back, and it was just awful.”

She stayed for a half-day on Friday as well.

After going to school Monday and Tuesday of the next week, the Springwood junior class went to Virginia for a class trip. She was in a wheelchair for the entire trip.

Spivey has been rehabbing at the Hughston Clinic in LaGrange, Georgia since March, right around the time COVID-19 started affecting business. Since she was listed as a critical patient, since she was so fresh off of her procedure, Spivey was able to continue her rehab during the shutdown.

Unfortunately, she hasn’t been able to consistently go to rehab, so progress has been slow. She started going twice a week, but that has been dwindled down to once every other week.

“My knee is really weak and unstable,” Spivey said.

One of the main exercises she does in therapy is one-legged squats where she will hold onto a handle in front of her to help maintain balance. When she was going consistently, Spivey’s knee was able to get used to the exercise and started to build strength. Now, it’s a struggle.

That has led to Spivey to not trust in her left leg yet. She won’t sit on that leg and when she gets up, she will only use one leg.

While she will miss cheer camp, Spivey will be able to be a member of the cheer team in the fall, but she will be limited to sideline activities. She has decided that she will play basketball again.

“I’m going to play basketball,” Spivey said. “I’m kind of nervous to start using it fully, and I’ll definitely be nervous once I start to cut and stuff during basketball practice, but I’m going to do it.”