West Point mayor, EMS, AKA give out masks, milk, meals 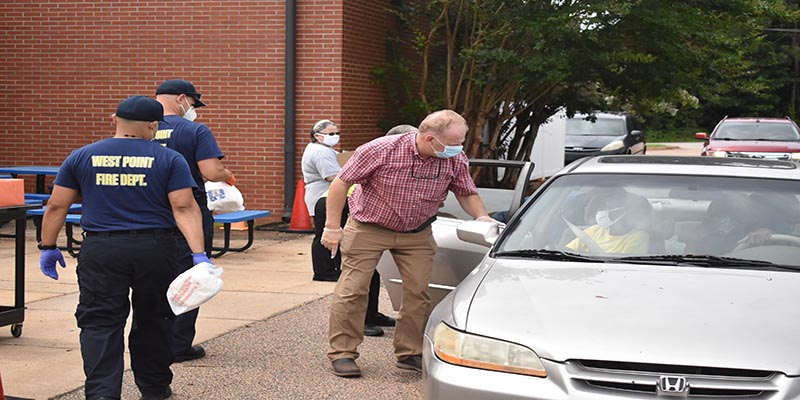 “It’s awesome. I like to interact with people, my brothers, my sisters,” West Point Police lt. Jorge Olmo Novoa said. “Every time we come out here to do something good for the community, it’s awesome. This is needed for the community. Times are hard. The economy is going in a downward spiral with everything going on. This is a good thing.”

A total of 70 gallons of milk were served, while 786 meals were given out to 131 students.

The milk was supplied by the Salvation Army.

Last week, West Point councilwoman Sandra Thorton, who is on the board for the local Salvation Army, received a call informing her about the shipment of milk that was coming. Thornton was asked if she could help give it out to families.

On Friday morning, Tramell and Thorton went to LaGrange, picked up the milk and brought it back for the hour-long giveaway.

“They called and asked if we could just coordinate if we could get this together. The school was already giving out the meals and the fire chief was already giving out the masks,” Thornton said.  “The school said they didn’t have the manpower to do the meals and the masks, so I just solicited volunteers. If you ask for volunteers, it’s not hard to get volunteers when it’s something to do for others.”

The masks were supplied by the West Point Fire Department.

“It’s another venue to try and stop the spread [of COVID-19],” West Point Fire Chief Milton Smith said. “Let’s be that positive influence and say ‘it’s still cool for all of us to ear the masks.’”

The fire department received masks from the Troup County Emergency Management and the Georgia Department of Public Health.

They received the masks last Friday and have already given out 4,000 masks in West Point.

“There is a big push in Troup County as COVID-19 numbers have spiked the last week and a half. This was a great opportunity to be face-to-face with people,” Smith said. “We’ve had a couple of mask give outs, and we’ve had a lot of come through our drive thru last week. We’ve reached out to a couple of the churches trying to make sure parishioners have an opportunity to have the masks.”

Overall, there were 14 volunteers in total. Six were from the West Point EMS, while seven were from the local chapter of the Alpha Kapa Alpha sorority.

Both Tramell and Thornton praised the volunteers for lending their services to the members of the community.

“I’m just so appreciative of the West Point community and how everyone turns out to volunteer like they do,” Tramell said. “We’ve always got great help with our police department and fire department. They’re so willing to help. Of course, the AKA sorority is always there to help the youth, the seniors and the underprivileged. The AKA does so much for this community. They’re a real blessing.”

The milk giveaway will continue for the next 10 weeks. Lunches will still be served three days a week for students in the Troup County School System.