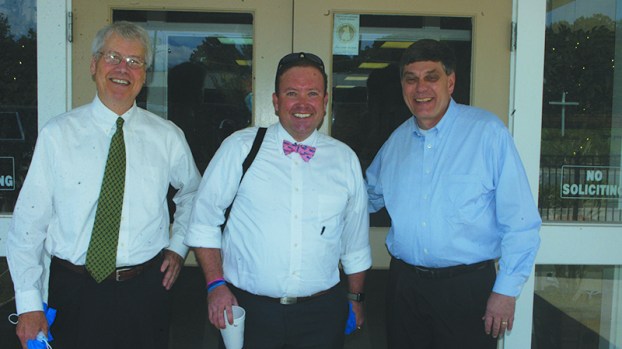 Aplin introduces himself to Rotary Club

Aplin talked about how his experiences in being a high school classroom teacher and coach led him to become a courtroom attorney. He’s now a partner with Larry Nix in the century-old firm Morrow & Nix, located on West 3rd Avenue in West Point.

“I love to talk,” he said. “Talking in front of the students was my favorite part of teaching. I now enjoy being in court, objecting to what the other side is doing and showing what’s wrong with it.”

Aplin said he handles all kinds of litigation and counts himself fortunate in being able to bounce ideas off a veteran attorney with the skill of Larry Nix.

Brian had always wanted to attend Auburn but after graduating from LaGrange High in 2003, he took a different path.

With out-of-state tuition being what it was he decided to attend Mercer University in Macon, Georgia. In college, he was a member of the Kappa Alpha order and was active in Young Life, a non-denominational ministry. He also took on his trademark look.

“I started wearing a bow tie back then,” he said. “It took me a long time to learn how to tie it. Now, I can do it in my sleep.”

After college, Aplin spent seven years as a teacher and coach.

“A lot of my friends still call me coach,” he said. “It was so gratifying to see some of the kids I coached going on to play sports in college.”

One of his players went on to play for his alma mater, the Mercer Bears, and Aplin saw him play many games.

Aplin credits his love of education for leading him back to Mercer and to law school.

“I wanted to be a liaison between the state and education,” he said, adding that he still couldn’t get out of coaching. “I coached my little girl’s soccer team.”

“I had a lot of personal growth during those years,” he said.

Professor Cole, who taught constitutional law, was one of his more memorable instructors. He was a great teacher, but what was most memorable about him was that he dressed the same every day. The students punked him on the final day of class by all of them dressing the same way he did.

After earning his law degree and being certified to practice in Georgia, Aplin went to work for a personal injury firm.

“There were a lot of good people with that firm, and they were well trained in representing people who had been hurt on the job or injured in accidents,” he said.

He was doing pretty well but the appeal of getting back home to Troup County weighed on him. That door opened when he joined Morrow & Nix a little more than a year ago.

“I can’t thank Larry enough for getting me back home and for introducing me to West Point Rotary,” he said. “I love coming to the meetings, and I have really enjoyed this opportunity to talk about my background.”

At Wednesday’s School Board meeting, Chambers County School District Superintendent Dr. Kelli Hodge announced there would be changes in the... read more