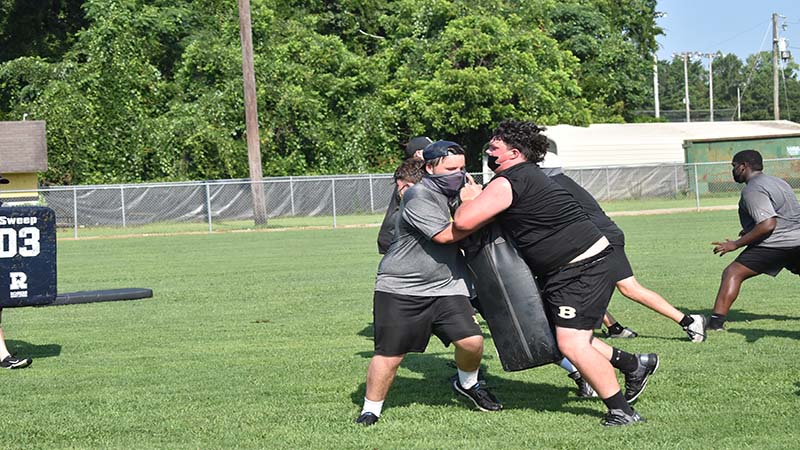 The Beulah football team got a late start on their summer workouts, but now in the second week into July, the Bobcats are entering their second full month of workouts on Wednesday.

“Our kids are excited to have a lot of people back,” Beulah head coach Matt Johnson said. “A majority of our team is back. Hopefully, we’ll get some good news soon, and we can expand one what we’re doing.”

Beulah was originally delayed because of a false positive test at one of the two local schools, which shut down both. The Bobcats also missed Tuesday’s workouts because of the state election, since the high school was a local polling place.

“We face some challenges, as I think all schools have. We’ve had some ups and downs, but when we’re here and able to work out, we’ve had really productive workouts,” Johnson said. “Today was a positive note. Each day is different, you’re going to have good days and bad days. When you have a  good day, you just have to be thankful for it.”

Just as they have in the first month of workouts, the Bobcats were split into three groups, skill players, linemen and the hybrid group made up of players that can see playing time at both spots.

Some groups got to put in some work on the field, like the linemen, while others were still in the classroom, going over formations and plays. Every group spent time in the weight room and did agility work to the side of the gym, where a large hill is located.

In the weight room, players did seven different workouts, focusing on shoulders and legs. They did five reps of front squats, overhead squats and goblet squats to warm up, before performing power cleans four sets for six reps a set. Next was lunges, where players lunged in a single file line throughout the weight room with dumbbells in each hand. They finished with a shoulder circuit that consisted of four different shoulder workouts. Each workout was performed for three sets and eight reps per set.

On the field, linemen worked on their different formations and pass block reads on certain plays. They brought out five linemen, while the other three, and Johnson held dummies that were then hit by the corresponding lineman on whichever block they were performing.

On the hill, players ran some type of sprint. Linemen burst out of their stances for three yards, while skill players raced one another up the steps.

Something that Johnson and his coaching staff have preached to their players is the importance of masks. At the end of Wednesday’s workout, Johnson talked to the entire team about the importance of wearing the mask, referencing the professions that are in direct contact with the virus and all the different protective equipment that is needed to perform those jobs.

“I just think that we owe it to our community and owe it to our fans to do what we can do to have football this year,” Johnson said. “We certainly owe it to our seniors. Some of them got robbed last baseball season, so I challenge them every day to do the best they can and whatever they can to be able to have a full season. If it’s wearing a mask, we’re going to wear a mask. If it’s social distancing, we’re going to social distance. Beulah High School is going to do its part in having this football season. Today everyone came prepared.”

Along with bringing a mask, players needed to bring their own water bottles, since hoses were not available for players to use.

Beulah will be able to start going onto the field more next week, as it can start wearing helmets and pads while going through drills.

“I think when you progress like we’re doing, that builds momentum,” Johnson said. “It allows our seniors to see that we actually have a shot for a season. That momentum allows them to push each other a little harder, while still doing it a safe way.