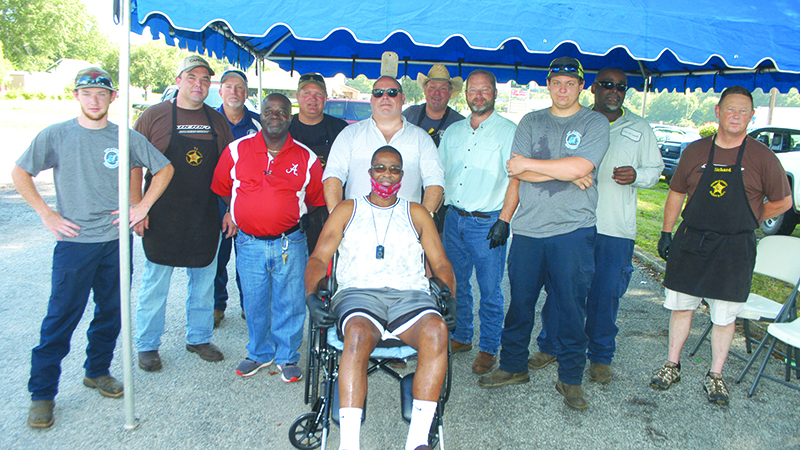 A benefit hamburger sale took place Friday for injured Lanett city employee Jerry Lloyd (at center). On May 16, Lloyd was hurt after falling an estimated 30 feet while attempting to cut a limb in a pecan tree. --Photo by Wayne Clark

LANETT — Chambers County Sheriff’s Office deputies and City of Lanett employees joined together Friday to have a benefit hamburger sale to assist a Lanett Street Department employee who was injured in a fall from a tree on May 16.

Jerry Lloyd has been with the city for the past 13 years.

The fall took place on a Saturday morning off Highway 50 in the Huguley community. Lloyd was an estimated 30 feet off the ground cutting a limb from a pecan tree when the rope holding him broke, causing him to plummet to the ground.

Lloyd sustained three broken ribs, a broken left pelvic bone and a torn diaphragm in the fall. One of the broken ribs punctured one of his lungs and another one punctured his intestines.

“I wasn’t feeling any pain right after the fall,” he said. “They told me to lie still and that help was on the way.”

He was treated by Lanett EMS and taken to the Huguley Fire Department, where a LifeFlight helicopter landed and transported him to the Piedmont-Midtown Medical Center in Columbus, where he went straight to the intensive care unit (ICU).

“It wasn’t a good situation, but that helicopter ride was nice. I’d never flown before,” Lloyd said with a smile.

He can joke about it now, but he underwent some delicate surgeries that could have him on the way to full recovery.

Fortunately, he does not appear to have suffered any nerve damage in the fall. He spends much of his time now in a wheelchair but has a good chance to walk again.

Lloyd has been through an ordeal to get back to where he is now and still will have to have some surgery on his left shoulder. He was in the intensive care unit (ICU) and on a ventilator for several days.

On May 27, 11 days after the fall, he had some major surgery. It lasted roughly six hours.

“They fixed everything on my left side,” he said. “They still have to fix my left shoulder. I didn’t know for several weeks that I’d injured it.”

Lloyd said he wants to thank a long list of people for helping him. That includes first responders, the LifeFlight crew, the doctors and nurses at the hospital, friends and family back home in Lanett and the guys who put on the benefit for him on Friday.

“I especially want to thank the Good Lord for pulling me through,” he said.

“They have been very supportive of me along with my girlfriend, Kelli Huguley,” he said.

Lloyd said that his tree-climbing days are over.

“That’s a done deal,” he said. “I won’t be doing that anymore. They had to put four or five screws in my pelvic bone to get it back together. I can’t take any more chances on getting hurt again. Any work I do from now on will have to be on the ground.”

Lloyd is hoping he can return to his job with the Street Department.

“I’m hoping to return one day,” he said. “For now, healing is a slow process. It is coming along, though. I am getting better and am hoping for a full recovery.”