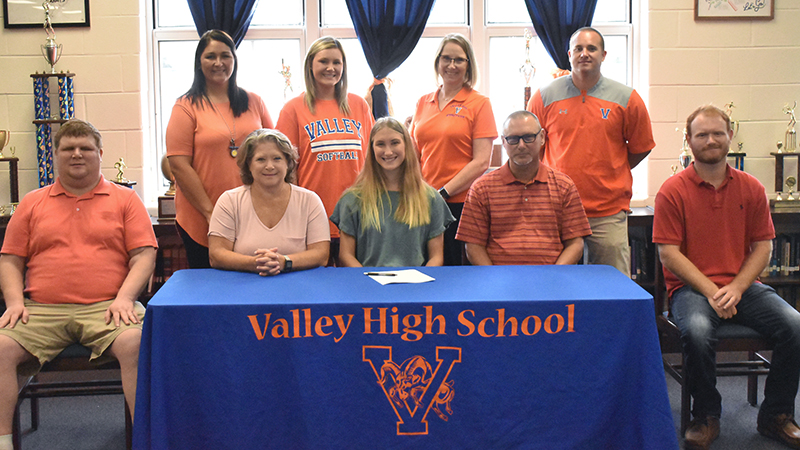 The Valley Times-News 2019 Softball player of the year has signed to continue her softball career.

In front of members of her family, friends, coaches and members of the Valley High School office, Faith Graben signed her official letter with Thomas University, a school in Thomasville, Georgia.

Originally, Graben wasn’t going to get a chance to have a signing day, due to COVID-19, but because of coaches Torie Hopkins and Mady Brown, Graben was able to sign in the Valley High School media center.

“At first I didn’t think it was going to happen because of COVID and with our season getting cut short,” Graben said. “It was definitely helpful to have coach Brown and coach [Hopkins] to get involved with it to get everything set and going. When I came to them, I said that I really wanted a signing and they said they’ll get it done. They got it done. It means a lot.”

As a junior, Graben dominated for the Rams in both the outfield and at the plate. As the Rams four-hole hitter, she hit .422,  added a .461 on-base percentage and .651 slugging percentage. She finished with a .879 fielding percentage in center field.

“She’s always had one of the highest batting averages on the team, and she’s one of the most aggressive players on the team as well, always working hard and trying to get better,” Hopkins said. “She was always a great asset to the team.”

During the first three years of her high school career, Graben won the Rams’ offensive award, which is given to the Rams’ best hitter. The only year she didn’t win the award was 2020 because the season was cut short. But Hopkins said that there was a good shot for Graben to receive the award her final year as well.

Distance from home was a big reason that Graben decided to sign with Thomas University.

Graben was originally set to play softball in West Virginia, but after deciding the distance was too far from her family, she decided to change to Thomas University, which is about a three-hour drive away.

“The distance was a problem for me because if something happened to me, they [her parents] weren’t going to be able to get to me in time,” Graben said. “It really came down to family.”

Thomas is far enough away from Valley for Graben to get the full college experience, but also come home when she has time if she wants.

“Thomas was giving me a scholarship that I just couldn’t give up,” Graben said. “I feel like that’s a really good fit for me.”