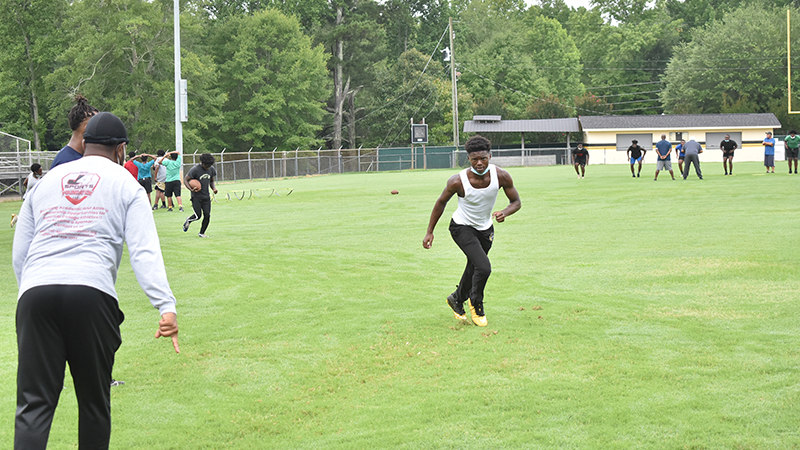 It’s been a little more than a month since the LaFayette football team started its summer workouts with first-year head coach Juan Williams, but the Bulldogs are already seeing the fruits of their labor.

“[I’m seeing] willingness to learn something different,” Williams said. “In this COVID-19, we’re up against something that we’ve never been up against, and we’re trying to keep these kids focused on the season. They’ve all come out and tried to work for what we’ve asked them to do.”

On Monday, the Bulldogs were split into two groups, linemen and skill guys, and worked in a circuit.

One group started in the free-weight section of the Bulldogs’ weight room. Every player was working at a different station during the workout and coaches spotted players.

The different stations were bench press, Russian twists with either a 25 or 35-pound plate, pushups with dumbells, where the player would punch out to either his left or right after coming back up and a variation of a military press, where instead of pushing straight up, they pushed at out an angle.

The other group started in the machine section of the weight room. In this section of the circuit, players curled an easy-curl bar and on one of the extension machines. Players also did pull-downs, tricep extensions, two variations of rows — either with a double D handle or two separate hand grips — and pull-ups.

After completing the circuit, everyone had a couple of minutes break in order to sanitize everything before the groups switched.

The entire workout took about 45 minutes, after which players went to the field to implement Williams’ system.

“We’re still implementing,” Williams said. “We’re a lot further on our defense than our offense because we’re new, coming in and implementing what we’re trying to do. We have to catch up with our offense.”

On the field, the players were split into three groups, skill guys, linemen and the younger players. Each group went to a different station that worked on improving their footwork. After finishing their drills, players were once again split into two groups, linemen and skill guys, each breaking down plays but on separate sides of the ball. The linemen started on defense, while the skill guys worked on offense.

Offensively, Williams worked on players learning plays by walking through a play then allowing the guys to call the play and work through it themselves. If there was a mistake, they stopped and walked through the role that needed to be fixed.