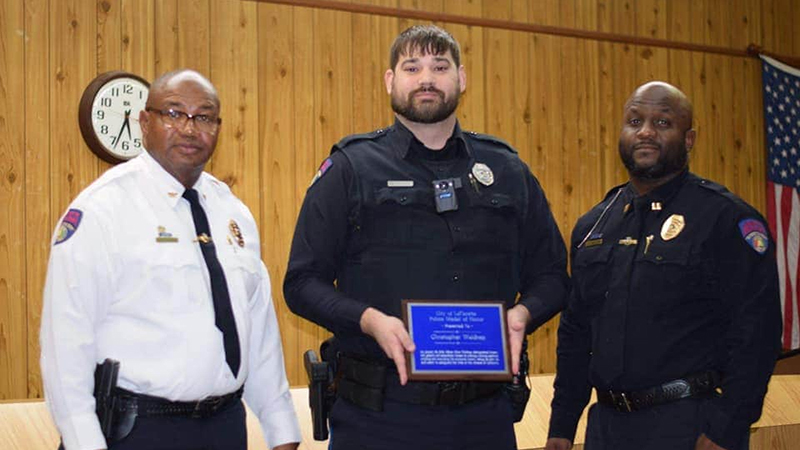 For most people in LaFayette, Feb. 18 was the day the LaFayette High School boys’ basketball team continued their winning streak to 31 games and sealed its spot in the AHSAA 2A state semifinals.

For Lafayette Police Officer Chris Waldrep and his family, Feb. 18 turned their world upside down.

The Bulldogs were playing in Jacksonville in the Northeast section of the Alabama High School Athletic Association’s playoff bracket.

For most of the roughly two-hour drive to the game, there was either pouring rain or thick fog, both of which made visibility tough for the drive.

Waldrep was making the drive when he got behind an 18-wheeler. Due to the fog, Waldrep didn’t see the truck until it was too late.

“I rode up on an 18-wheeler, and I got real close before I realized where I was at,” Waldrep said. “I was trying to shoot around him real quick, and I ran into him. When it happens, you kind of lose everything. You close your eyes and hope and pray to God, which is what I did.”

“When they finally got me out, they realized that I couldn’t move my fingers,” Waldrep said.

Waldrep had broken his left arm and was transported to Piedmont Columbus Regional Hospital in Columbus, Georgia. He stayed there overnight and had surgery on his broken arm. The two broken arms were the radius and the ulna. He also had fractures on his wrist.

The procedure, which lasted five hours, placed metal plates on both sides of his arm.

His left knee was also treated since it had been banged up by the door in the wreck.

“From there, it was just a slow process to get back,” Waldrep said.

At first, Waldrep didn’t have any function in his left hand. The only finger he could move at the time was his thumb and partially his pointer finger. The other three fingers were stuck in a halfway position.

While he was in a cast and knee brace, moving was difficult, so his wife did a lot for him for two months until his knee was strong enough to bear his full weight and walk freely.

It took him the better part of four months to get full function into his hand.

“I waited until June until I started getting full feeling back into my left hand. I could start working on it and doing push-ups, just doing things that I could do to get back to work,” Waldrep said.

On July 1, he reached out to LaFayette Police Chief George Rampey about returning for work. Waldrep, who has been working for the LFP since Christmas Eve 2017, was ready to get back to work.

“I missed my job, and I wanted to go back,” Waldrep said. “They looked at it [my hand] and said that it’s healed enough that I could go back to work full time. I just have to be careful with it and not do anything crazy.”

On July 13, Rampey introduced Waldrep, along with the new officers in the LaFayette Police Department, to the LaFayette City Council.

“It was mainly a lot of mental [fortitude], trying to keep myself focused and praying to God that I get my hand back because if I didn’t, I wouldn’t be able to be a police officer,” Waldrep said. “There were a lot of doubts. At one point, I called my chief and said ‘I don’t even know if I can do it.’ He talked to me and talked me through it saying ‘You’ll be alright. Just keep doing what you have to do.’ It  was just by the grace of God that I was able to survive.”