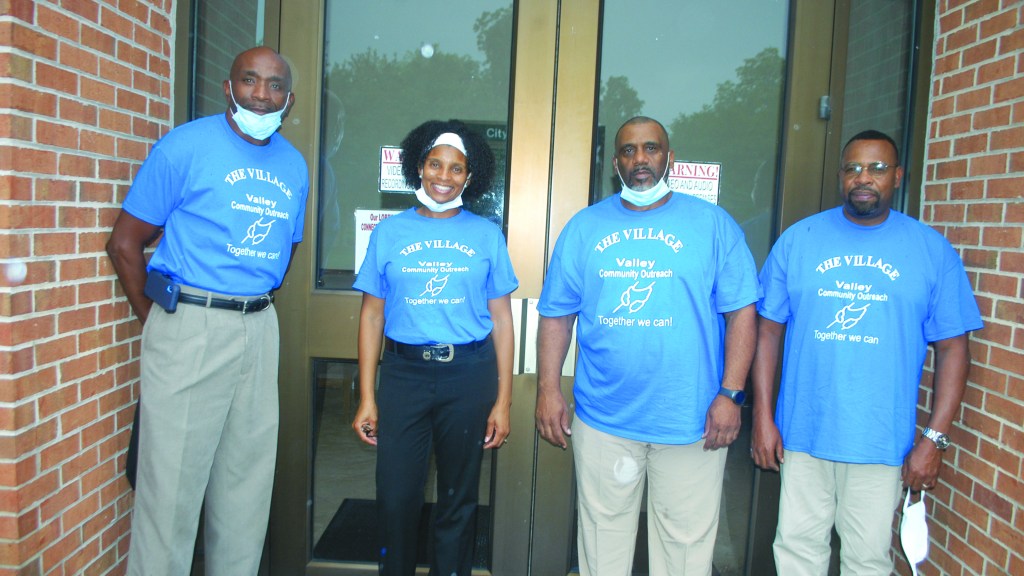 Members of Valley Community Outreach (a.k.a. The Village) are planning a Community Cleanup in Lanett. It’s set for Saturday, July 11. They talked about their planned cleanup day at Monday’s meeting of the Lanett City Council. From left are Clint Gilder, Bridgette Heard Wilson, Kenny Johnson and Vernon Carter. --Photo by Wayne Clark

LANETT — Some local residents who are planning a Community Cleanup in Lanett on Saturday, July 11 were honored in advance by the Lanett City Council Monday evening. Receiving certificates of appreciation were Clint Gilder, Bridgette Heard Wilson, Kenny Johnson and Vernon Carter of Valley Community Outreach (a.k.a. The Village), Travis Hargett and Paige Core of the Children of West Shawmut, the Rev. Bernard Williams and Henry Lee Goss.

Wilson told the council that members of The Village grew up in the Valley area and that not all of them still live here, it’s a place that will always be special to them.

“We want to give back to the community,” she said. “That’s why we want to do this cleanup. We’ve previously done cleanups in Fairfax and West Shawmut. We’ve sent 225 care packages to our soldiers. Up to this point, I guess you could say that we’ve been moving in silence. In addition to this Saturday’s cleanup we are planning on having a back-to-school event where we will be giving away book bags.”

Wilson and the other members of The Village are inviting everyone to join them for the Saturday cleanup.

“We will be meeting at 9 a.m. at the L.B. Sykes Community Center (formerly Lanett Junior High) on Cherry Drive in Lanett,” she said. “If you join us, please wear a face covering and be mindful to stay six feet apart.”

Council Member Jamie Heard thanked them for their recent West Shawmut cleanup and for what they are planning to do for this coming weekend.

Council Member Angelia Thomas said that cleanup of litter was one of her central concerns and thanked them for their initiative in taking this on.

In other action at Monday evening’s council meeting, a resolution was approved on the use of electronic voting machines in the Aug. 25 municipal election. The city will be using three of the county’s machines in the upcoming election.

The council approved a resolution declaring property located at 107 South 2nd Avenue a public nuisance and for condemnation actions to proceed.

The action involves the city’s attempt to acquire property, or property rights, near the expansion of the Lanett airport.