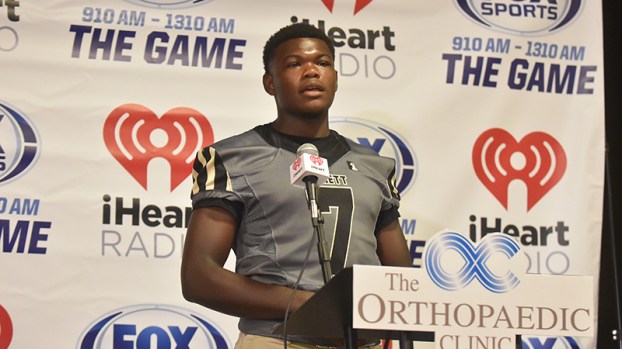 On Wednesday, the Lanett Panthers were the sixth and final team from Chambers County to speak at the iHeart Media Fox Sports High School Football Media Days.

The Panthers are one of three schools in Chambers County that will make the jump up in classification in 2020, as the reigning 1A State Champions make the move to 2A. Head coach Clifford Story and his team say they are ready for the jump because they’ve done it before and won at that level.

“We did it [won a state championship in 2A] in ‘17,” Story said. “We’re very familiar with the teams in our region because we’ve played them all, with the exception of B.B. Comer. For me to be familiar with what they’re going to do offensively and defensively, it gives us an advantage because we know what we’re going to face. We’re going to have film from past years. We just have to be prepared to stop it. I’m actually elated to be back.”

After having stability at the spot for the last three years, the Panthers are in the midst of a quarterback battle. M.J. Atkinson, Caden Story and Kadarious Zackary are all vying for the starting job as the Panthers head into fall camp.

“Those three guys are all going to compete,” Story said. “It gives me an opportunity for myself, because I’ll be coaching them, to really see how competitive they really are. You want someone at the quarterback position that has leadership, and they want to compete.”

The Alabama High School Athletic Association Central Board of Control approved the Return to Play guidelines Wednesday afternoon.  With the... read more