Mackey gives back to LaFayette youth 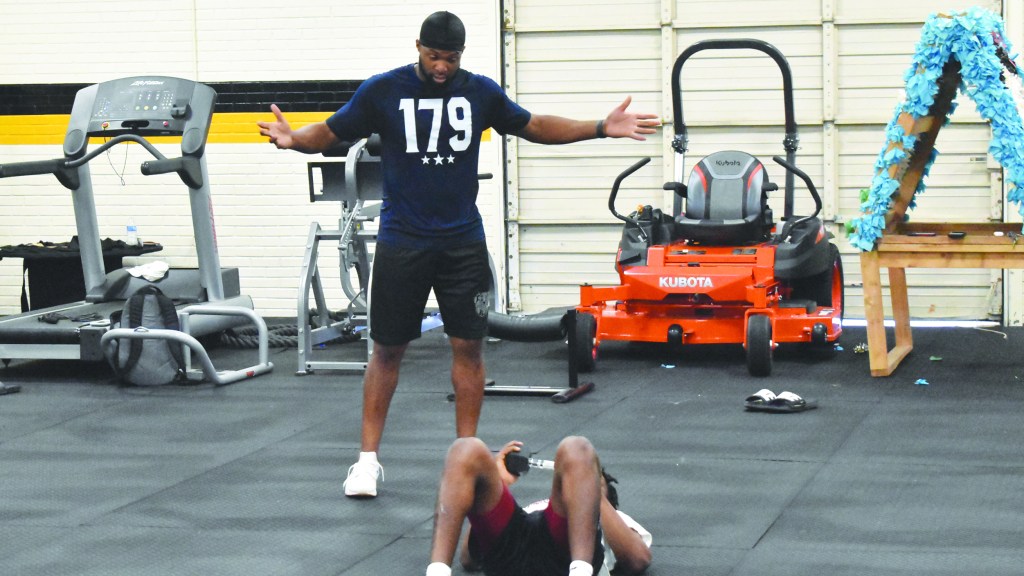 Devon (Dee) Mackey talks to Corey Boston, while Boston works out during Monday’s workouts. Boston was one of three former Bulldog athletes working with Mackey.--Photo by Cody Estremera

Devon “Dee” Mackey returned to LaFayette after the end of the 2017 American Arena League season. He was done playing professional football, and it was time for him to give back to the community that he lives in and loves today.

“A lot of folks believe that you always have to give back with money, but it’s bigger than that,” Mackey said. “Just being consistent with the kids and just being in the community, it just means a lot to me.”

Mackey started out in LaFayette as a standout basketball and football player. He graduated in the class of 2011 and earned a scholarship to Stillman College, a Historically Black College/University in Tuscaloosa.

After graduating in 2016, he played in the AAL for the Vermont Bucks and then the Carolina Energy, which is now the Charlotte Thunder. He won a championship with the Bucks in 2016, and lost in the championship game in 2017 with the Energy.

“I always wanted to come back and give what I’ve learned to them,” Mackey said. “Playing college football and basketball, it was very competitive playing at HBCU. These guys are gritty and grimy. I wanted to give these guys the things that I learned.”

“I feel like if I can get them this now, once they get to college, it’s second nature to them. I know they’ll be firing on all cylinders,” Mackey said.

Mackey doesn’t charge the guys he works out anything, he just expects them to work hard in school and on the court or field that he is trying to build a career in, simply because he is able to.

When Walker committed to UTC, his father spoke about Mackey during the signing.

He told the story of how Walker needed to get into the weight room, and the family was trying to figure out the best course of action. Instead, Walker just told his family about Mackey’s workouts.

After being skeptical about it at first, Walker started working out with Mackey and the other athletes from LaFayette.

“He worked Jordan out early in the morning before school, and he had to go to work. After school and practice, he came back and worked him out again,” Walker’s father said in early February. “The guy works a full-time job, and I’m trying to figure out what type of guy he is.”

He announced Mackey’s name at the end of talking about him, and the auditorium, which was made up of LaFayette seniors, teachers, some alumni and Walkers family, burst into applause.

All of the workouts that Mackey holds are a way for him to help the next generation of LaFayette athletes. He said he’s giving them a push he didn’t have.

“I try to be that person,” Mackey said. “I talk to a lot of their parents, and I tell all of them that I didn’t have anyone behind me pushing me the way that I’m pushing these kids. What I don’t want to happen is for them to get in the film room and for them not to know the landmarks on the field or on the court because that was stuff I just didn’t know. Stuff like that helps you break the court or the field down into increments. It makes you faster and smarter and your instincts kick in faster. That’s one thing that I want these kids to have once they go college and the ones that are in college as well. They’re already sharp and they know what to do already. It’s just going to be second nature to them. It’s not a learning process.”

Mackey helps with both the basketball and football teams since he knows what it takes to succeed at both sports. He’s out at basketball practice scrimmaging against the team, especially before big games whether it’s 6 a.m. or 6 p.m.

As long as he’s not at work, Mackey is finding ways to give back to his community.

“That’s everything for me,” Mackey said. “Giving back, it’s just a passion for me. I come back and give to these guys four or five days a week. Just giving back, people don’t understand the multitude of that. It’s just the little things.”