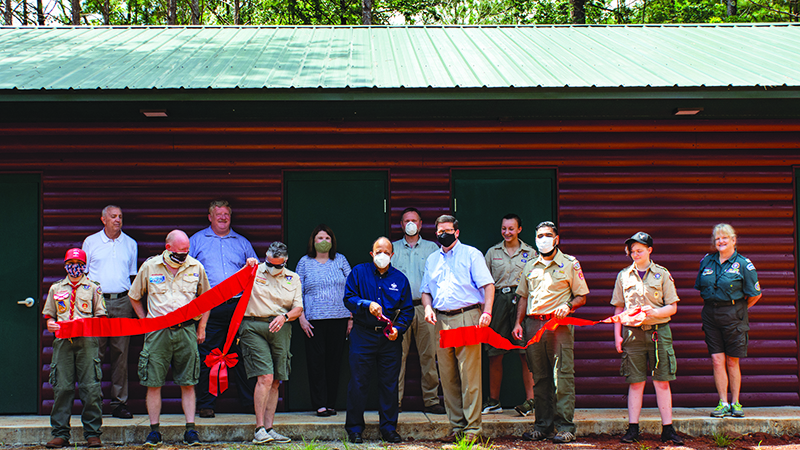 The Chattahoochee Council, Boy Scouts of America and members of the Callaway Foundation open the new restrooms at Camp Lumpkin in Troup County.--Submitted

After almost two years of strategic planning and building, a million-dollar project has been completed at Camp Frank G. Lumpkin to accommodate females in Scouting.

On Wednesday, the Chattahoochee Council, Boy Scouts of America and members of the Callaway Foundation gathered at Camp FGL to officially open the new facilities.

According to Callaway Foundation President Tripp Penn, in October 2018, the foundation gave $1 million that was usedmostly to help the transition of females being integrated into the Scout program.

“We were making sure that we could accommodate females at the camp for this summer pre-COVID-19,” said Juan Osorio, local Boy Scouts of America CEO. “We got on board and started doing everything we needed to do to meet our deadline. Unfortunately, because of COVID-19, we are not running a traditional summer camp.”

Programs have shifted from in-person to virtual programs, such as, virtual backyard camp-outs, 30-day challenges, virtual meetings and virtual advancements.

Osorio said that even though traditional camps are not happening, Camp FGL is allowing scout groups to still use the facility and rent out campsites.

“They can camp individually and have the ability to use the new restroom facilities that were recently built,” Osorio said. “We have seven campsites that are relatively large camp sites. We had two existing bath houses that are near where these campsites are located, and they were adequate for males. As we started to bring females into the program, we knew we had a need to have more bath houses and restroom facilities at camp.”

Two new bath houses were built and added near the existing campsites. A new addition was added to the pool house so females can have a changing area at the pool.

“A new restroom was also added in our shooting sports area which is where we have archery shotgun and rifle,” Osorio said. “We added a restroom facility there for both males and females just for convenience.”

Osorio said that the projects would not have been able to complete without the support of the Callaway Foundation and belief in the Scouting program.

“We have been pretty supportive of Boy Scouts over the years,” Penn said. “Our trustees have a long history of support with them, and I know there was a significant grant to the camp long time ago to help get the camp started.”

Camp FGL and the local Boy Scout program serves over 3,000 youth in the community

According to Osorio, they strive to instill a strong sense of responsibility and character and encourage the youth to become leaders in their communities.

“Our trustees are excited to see this project completed and to continue to support the legacy of Scouting and the Chattahoochee Council,” Penn said. “Camp Lumpkin is a gem to our children and our region, we look forward to having current and future generations of boys and girls learn the values of Scouting and foster a love of the outdoors.”

Despite the pandemic and closures throughout the state, Scouts have still been able to stay consistent with excelling in the program.

“We have still been able to maintain multiple of our programs,so that they can advance,” Osorio said. “For some of our youth,it is probably the only thing that has remained consistent.”

Osorio said he was excited that facilities were finished this week.

“I grew up in scouting, and I’ve got to tell you this camp is a state of the art campus,” Osorio said. “It is a top-notch facility. I think that when our scouts step foot camp, and they see everything that we do to maintain camp, it enhances their experience which allows them to stay in scouting longer and eventually become the leaders of our nation.”