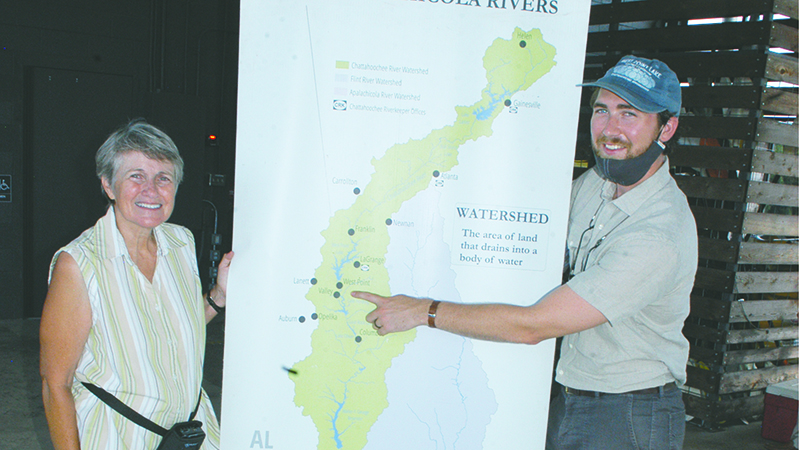 WEST POINT — The director of Middle Chattahoochee Riverkeeper (MCRk) talked about his organization’s continuing efforts to make the Chattahoochee the cleanest and most environmentally friendly stream it can be at Sunday’s quarterly meeting of the Chattahoochee Valley Historical Society.

Henry Jacobs spoke to a modest group underneath the large pavilion outside West Point City Hall on the west bank of the river. There was plenty of room for social distancing, and almost everyone was wearing a mask. The large roof protected CVHS members and guests from a summer shower that rolled past during the program.

Jacobs said the Chattahoochee begins just off the Appalachian Trail in north Georgia and winds its way some 475 miles to the Gulf of Mexico, passing through the Blue Ridge Mountains, the Piedmont and the Gulf Coastal Plain before emptying into Apalachicola Bay, a place that’s special to Jacobs because he visited his grandparents many times in Apalachicola, Florida while growing up.

“They used to harvest 3 million oysters there every year,” he said. “I have a lot of memories shucking oysters there. It was down to 21,000 last year, and the Bay has been closed to fishing for the next five years.”

A combination of droughts and oyster beds being disrupted by storms has devastated the oyster population in Apalachicola Bay. Some time is needed for them to build back.

“I’m sure you’ve heard about the tri-state water war,” Jacobs said. “The water of the river is  important to Georgia, Alabama and Florida.”

Jacobs said some people are surprised to learn that agriculture is a much bigger user of water than is the metro Atlanta area.

“Agriculture uses five times as much river water than Atlanta does. Farmers are trying to be better at preserving water use,” he said, noting that some large farms in the middle and lower Chattahoochee regions are taking bold and imaginative steps. These efforts include putting sensors in the ground letting them know whether to water their fields and by how much.

“You can be miles away from the river but have an impact on it,” Jacobs said.

He cited LaFayette and Opelika as local cities that are on the western border of the Chattahoochee’s drainage area. The new solar farm on the south side of LaFayette, for example, is affecting the water clarity of the river as it flows through West Point.

“One side is clear and the other side is red with mud,” he said.

He followed this up and found the red water was coning from Oseligee (or Waterworks) Creek north of town.

“Several years ago, around 1,500 acres of land was clear cut for the big solar farm,” he said. “That’s where the mud is washing in from. They have tried hard to have revegetation, but it has been slow to take hold.”

Riverkeeper is now monitoring the water from Oseligee Creek as it flows into the river.

“This is the kind of work we are doing all along the river,’ Jacobs said.

He cited West Point Lake as one of the biggest beneficiaries of the organization’s work. It’s a much cleaner lake now than it used to be.

Riverkeeper was formed in 1994 as part of the buildup for the 1996 Summer Olympics, hosted by Atlanta.

“At the time, the river south of Atlanta was badly polluted,” Jacobs said. “Riverkeeper led a lawsuit against the City of Atlanta. As a result of this action, between 1997 and 2007, the City of Atlanta spent over $2 billion in upgrading its sewer system. This helped to energize growth in the Atlanta area. A place like Atlantic Station is an example of this growth.”

News reports in the late 1980s and early 1990s painted a picture of West Point being a dying lake. This emboldened organizations like Chattahoochee Riverkeeper to hold polluters accountable. Such work continues to the present day.

Recent water monitoring south of Atlanta led to finding a company that was dumping sealant material for asphalt into a creek that flowed into the river. A stop was put to that.

Jacobs said that nearby Flat Shoals Creek was a special place and that it’s important to keep it that way.

“It’s right on the fall line,” he said. “There’s one place where it drops 50 to 75 feet in one mile. It’s spectacular there when the shoals spider lilies are in bloom.”

To survive, these plants need clear, swift-flowing water. In his classic work Travels (1791), William Bartram writes of streams throughout the region being abundant with these lilies during the spring. Today, a relatively few colonies of them remain with the ones on Flat Shoals Creek being one of the best collections in Georgia.

Jacobs believes the lilies could return in large numbers to the river, provided there are places of clear, swift flowing water.

This could happen along the portion of river flowing past the City of Valley, should Georgia Power proceed with plans to take out the low head dams across the river near Langdale and River View. It’s a controversial move but could be done within the next three to five years.

Jacobs said Riverkeeper’s position is for the Chattahoochee to be returned as close as possible to its original state.

That means taking out the low head dams that aren’t producing electricity. That was done in recent years in Columbus to produce the whitewater course. A possible drawback to removing the dams at Langdale and River View is that it could reduce the shoal bass population between the two dams. Should the river go back to its free-flowing state along that section of river, it would free up the river to other species such as largemouth bass.

That would not be good for the present shoal bass population. Having the river free flowing once more could also affect local landowners.

“The dams were well built,” Jacobs said. “When the river was down, I walked around in some places underneath them. They are somewhere between 15 to 20 feet tall. I know how important these dams are to local people. The idea that they would be done away with tears at their hearts. It’s yet to be finalized, but it could take place in several years.”

Jacobs said the section of river flowing past Valley is an amazing place with the Crowhop Islands, lush scenery and abundant wildlife.

”Several years ago, Jody Simms and Jimmy Stewart took me through it on a paddle trip,” he said. “They showed me all kinds of interesting things such as the dams and navigation channels where the flatboats used to go.”

The Georgia Power position is that the dams no longer produce power for the company but remain a liability.

“In some ways, it’s a dangerous place,” Jacobs said. “Some people have lost their lives being swept over the dam and drowning. The shoreline will shift in some places if the dams are taken out. This could affect local landowners. There could be some environmental benefits with the return of the shoals. The shoal spider lilies could return.”

One reason Riverkeeper does as much monitoring as it does is that the state doesn’t do much of it.

“Over 2,000 places are emptying into rivers and the state has only two employees trying to keep track of this,” Jacobs said. “Chattahoochee Riverkeeper has 18 people doing this. We have found situations such as the asphalt sealant plant dumping material into a creek.”

Jacobs said that Riverkeeper has been heartened by the improvements they have seen at West Point Lake. They like to take people out on the lake in “The Miss Sally,” their floating classroom.

“We are hoping to have some limited trips on our floating classroom this fall,” Jacobs said.

“We normally have around 30 people per trip. We may cut that back to around 15. The classroom allows us to continue educating people about the river, the importance of water monitoring and to get across the message that it’s an endangered place. We have to keep our work going to keep from losing it.”