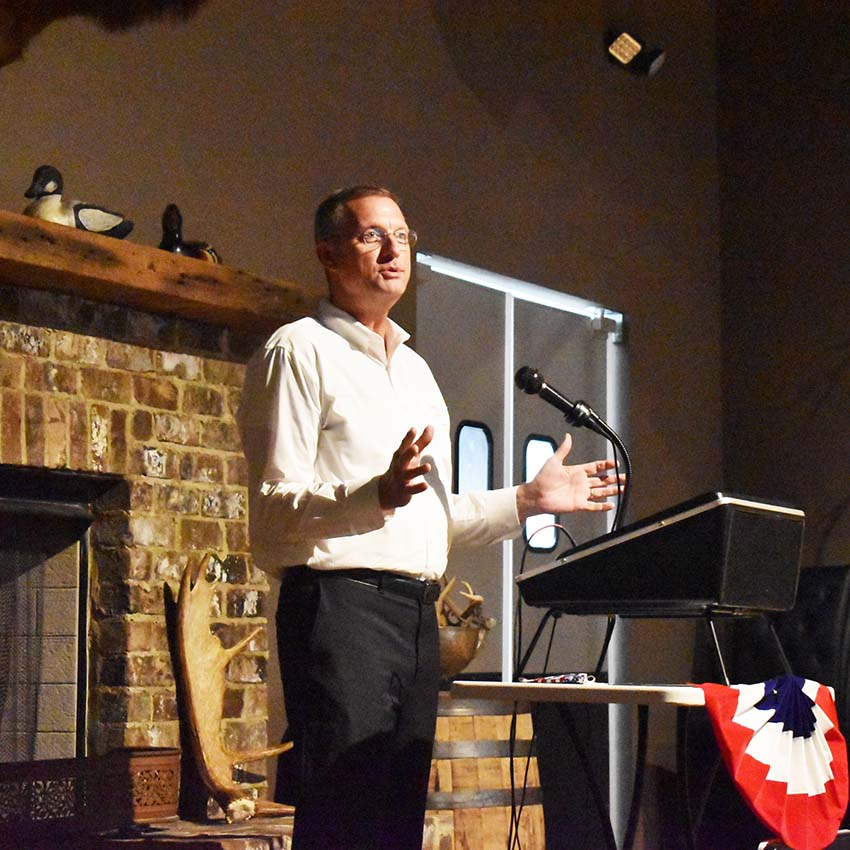 Collins spent part of his speeches Tuesday focused on the movement to defund the police.

Collins specifically referenced an incident in New York City where an officer was attacked and put in a chokehold.

“All I’ve got to say is Mayor [Bill] de Blasio, AOC, get yourself in a patrol car and do the job before you start complaining about the job,” Collins said.

He spoke for about 10 minutes overall, hitting on a wide range of topics.

“I have been fighting against this wave that is going on in Washington, DC led by Speaker [Nancy] Pelosi and others that want to move us away from the foundations of who we are as a country, from a capitalist system from our system of free enterprise and our system of growth,” Collins said. “And what we’re moving toward is something where they want government to be in control. I don’t know about you but how many of you think more government is the right solution? Not me.”

Collins spoke to The LaGrange Daily News after his speech Tuesday, discussing the state of COVID-19 in the country, education and the importance of broadband internet access.

“This is almost like bringing electric power to the country. In fact, in some ways it’s more important because our internet and our broadband is such a key for our jobs, education and our economy,” Collins said. “You can still read by candlelight, but you can’t do research, you can’t do other things without the internet and that broadband capability. It is going to be an even bigger priority for me [now] … There is going to be some hard to reach areas, but it should not be the majority of people.”

“I think we needed to open back up and I think Georgia has been an example of that,” Collins said. “We’re seeing cases rise right now, but that’s to be expected. So many people thought because we shut down for a few weeks that was going to get rid of the virus. That was never the intention. The intention was to keep our hospitals in our locations being able to maintain proper services. Right now, hospitalizations are staying low, and we’ll have to watch out as we go, but people are having common sense, doing what they need to do.”

While he was in West Point, Mayor Steve Tramell and Sheila Simpson presented Collins a Quilt of Valor, which are sewed at SewingMachine.com and given to current and retired members of the military. Collins is currently in the Air Force Reserve.

“This is just a great place be tonight,” Collins said. “I mean how can it be any more political and American to be in a smokehouse? I’m just excited to be here.”

Collins decided to make the change from the House of Representatives to the U.S. Senate shortly after Republican incumbent Kelly Loeffler was appointed and President Donald Trump’s impeachment hearings.

“My wife and I had been praying about it and thinking about what we needed to do,” Collins said. “We saw Georgia as a changing dynamic. I had been traveling all around the country in areas which conservatism needed a spokesman, someone who can talk to all walks of life. We need to broaden our base.”

Collins is up against Loeffler and Democrats Matt Lieberman, Ed Tarver and Raphael Warnock in a special election that will be held Nov. 3. Loeffler is scheduled to be in Troup County Thursday.