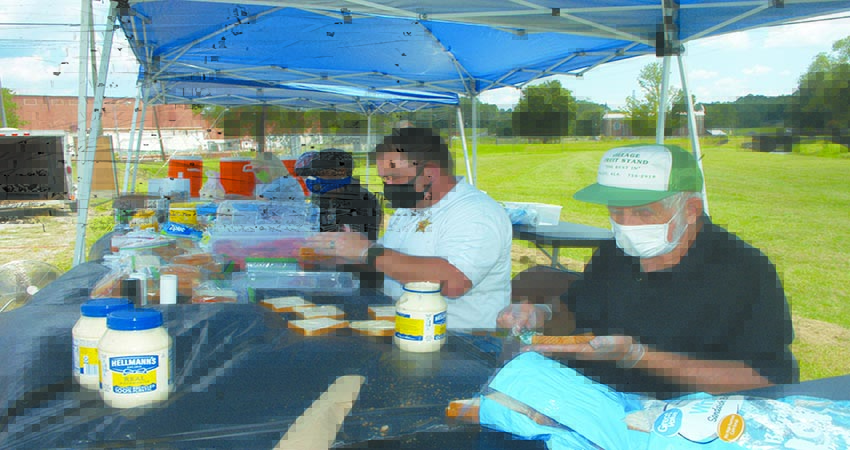 VALLEY — A good-sized crowd was on hand for Friday’s annual Free Tomato Sandwich Day at Valley Farmers Market. Something different this year is that the attendees could have their choice of sandwiches made with tomatoes, not just of the traditional vine ripe red look, but also with tomatoes that were orange, yellow and even purple.

Farmers at booths under the pavilion had some green ones, too. They were for those who like to fry them.

Providing the freshly-picked tomatoes were Walter Pulliam of LaFayette, Bill Carson of Wadley, and Randall and Laura McClellan of Fredonia. They are among the participating farmers at Valley Farmers Market.

Pulliam has been farming since 1977. He said that he’s really been pleased with the way his crops have been coming along this year.

“Everything is growing well right now,” he said. “We have gotten a lot of rain this spring and summer. Our tomatoes, squash, purple hull peas, and pole beans are looking good. Our watermelons are coming along too.”

Mr. Carson’s farm is about three-and-a-half miles from the Tallapoosa River “as the crow flies.” He’s been farming for some 60 years and had a good variety of fresh vegetables at his booth on Friday. He had several varieties of tomatoes including Dixie Red, Delicious and Mennonites along with Cherokee Chocolates and Virginia Sweets. He also had eggplants, squash, cucumbers and several varieties of beans.

“We’ve gotten over 60 inches of rain this year.” he said. “That’s more than we would have liked.”

The McClellans run Circle M Farm off County Road 263 in Fredonia. Laura is really good at making jellies. She had a new variety, cranberry, at their booth on Friday. She’s hoping to have muscadine jelly in the coming weeks to go along with her ever popular peach pepper jelly and blackberry jelly. The McClellans also had lots of tomatoes and beans along with purple hull peas.

The Beulah corn man, Jimmy Dykes, had a truckload of his white sweet corn for sale on Friday. He and wife, Idi, have a farm off Ben Brown Road.

Two sisters and a brother had lots of appetizing peaches and tomatoes for sale on Friday. Carey Carroll, Campbell Nichols and Rice Nichols run the Farmer in the Dell near Auburn.

“We are in our second year of coming to the Valley Farmers Market,” Carroll said. “We hope to keep coming. We have had our farm for 15 years. We’re located on Wire Road about six miles south of the (Auburn University) vet clinic. We grow for farmers markets in the spring and summer. We have a pumpkin patch in the fall and have a Christmas tree farm in December.”

The vast majority of people at the farmers market were wearing masks on Friday and were cooperating with the rules on social distancing. Lines six feet apart were marked off on the parking lot’s asphalt to keep people spread apart.