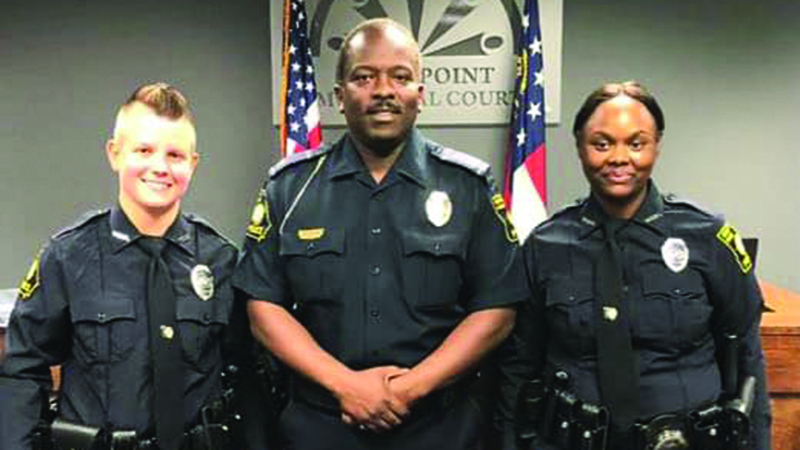 “It was very surreal,” Freeman said. “It still hasn’t registered completely. It was a very proud moment. I can’t think of a moment where I’ve ever cried being so proud of myself. It was probably the biggest accomplishment that I’ve ever done.”

The pair also graduated from the police academy recently, finishing the 11-week program together.

“It was tough,” Johnson said. “We did a lot of studying. We helped each other out a lot. We kept our head held high and got through it together.”

The two will start in the Uniform Patrol Division.

For most of her life, Johnson has wanted to be a police officer, stemming from watching officers in television shows.

“It felt great,” Johnson added. “I’ve wanted to be in law enforcement since I was 7, so it felt pretty good because I accomplished a big dream.”

The dream stuck with her as she developed as a person, which is one of the biggest reasons she decided to stick with it.

“I see myself as the type of person that anyone can come up and talk to, and I can help change their life for the better,” Johnson said. “I just like helping people.”

Johnson is originally from West Point. After graduating from Albany State University in December of 2019, she decided to return home and be with her family. Her grandmother was battling cancer and she wanted to stay close to her family.

Freeman decided to become a police officer because of its structure.

“I didn’t really have a lot of structure growing up, and I wanted to have that,” Freeman said.

That structure is also key for Freeman because she has custody of her 4-year-old niece. Freeman believes the structure that the police force provides will benefit her and her niece.

“I didn’t want her to grow up the same way I did,” Freeman said. “I wanted to have something to be proud of and something that she could be proud of.”

Freeman is originally from LaGrange, where she still lives.

She chose to work for the West Point Police Department for a couple of reasons. The first being it is a smaller operation than in LaGrange. The other was she just wanted a fresh start.

“I didn’t want to be in a city where I knew a lot of people,” Freeman said. “I just wanted a clean start.”