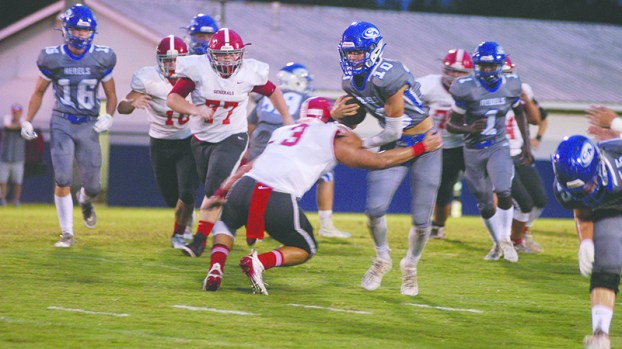 LaFAYETTE — After opening the 2020 high school football season last week with an impressive win over Lee-Scott on the road, the Chambers Academy Rebels continued that hot start at home, blasting the Abbeville Christian Generals 38-0 at Torbert Field on Friday. Chambers roared out to a 25-0 lead at the half and added two more second-half scores to win going away.

Now 2-0 on the young season, Chambers will be at Springwood next Friday in the renewal of a cross-country rivalry.

“It was a great night for our team,” said Coach Jason Allen after the game. “I saw some definite improvement from last week. I thought Jason Benbrook had a great game running the football and Payton had a really good game running the offense and passing the ball.”

Benbrook carried the ball eight times for 139 yards and three touchdowns. Payton Allen passed the ball for more than 260 yards.

Coach Allen said his team came out of the game in good shape injury-wise.

The game was played with COVID-19 protocols. Spectators entering the main gate before the game were given temperature checks and were not allowed in without masks. Many Rebel fans wore masks featuring the Chambers logo. One of the loudest ovations came when stadium announcer Jonathan “Moose” Mapp posed a question for the crowd late in the game. “Isn’t it great to be back under the lights on a Friday night?”

The crowd responded with a loud “Yes!”

Chambers broke on top in the first quarter with the first of Benbrook’s two long scoring runs. He ran off right tackle and broke free down the sideline from 43 yards out to put Chambers up 6-0. A try for two points failed, leaving that score unchanged.

Some solid defense put the visiting Generals in a deep hole following the kickoff. Consecutive lost yardage plays put them inside their ten, forcing them to punt out of their end zone. Junior linebacker Hunter Knox and junior defensive end Kross Colley came up big for Chambers in that series.

Chambers got a good return from John White putting them in great field position, first and ten from the Abbeville Christian 18. It took the Rebels only one play to score. Ben brook took a handoff off right guard and cut back to the middle of the field, racing to the end zone untouched. The Rebels again failed to convert on the PAT, leaving the score 12-0 with 11:00 left in the second period.

The lead went to 18-0 minutes later when Payton Allen connected with Jeremy Conway on a long scoring play. Jeremy Pollard’s PAT made it 19-0 with 9:39 left before the half.

With just over two minutes left in the half, Benbrook scored on his longest run of the night, 77 yards. On the play, he took a handoff off the right side, quickly cut to the sideline and was off to the races.

That made the score 25-0, and that lead held up at the half.

The Rebels added two more scores in the second half to round out the scoring. One TD came on a beautifully-executed pass play from Allen to senior wideout Josh Holliday. On the other score, Allen connected with Conway on another long scoring play.

The visitors did muster two long drives in the second half, mostly on the ground, but the Rebels kept them out of the end zone with two goal-line stands.

After a tough loss in their first game, the Springwood Wildcats bounced back on Thursday, when they defeated Southern Preparatory... read more