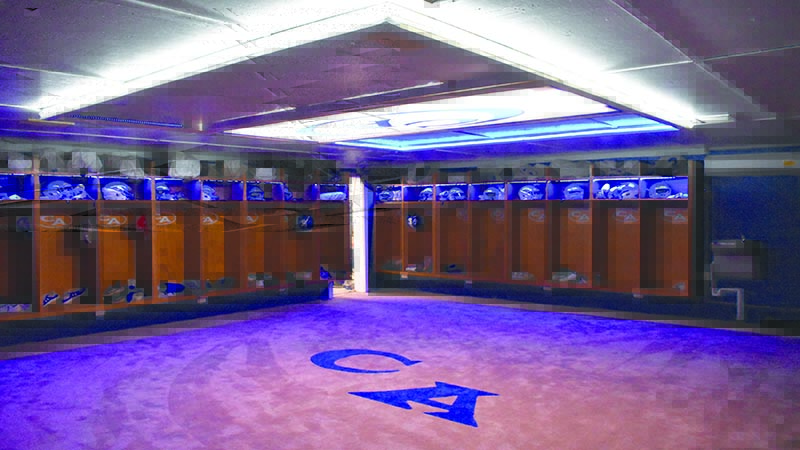 Since May, Chambers Academy has been renovating its football locker room. There is new carpets, lights and a new film room.

Since May, the Chambers Academy football locker room has been getting a facelift. Now, roughly two and a half weeks until the Rebels host Abbeville Christian, the renovation has been complete.

“Coach Wade Bylsma really was the lead hand in doing this. He spent a lot of his extra free time in here,” Head Coach and Athletic Director Jason Allen said. “He wants the kids to have nice things like our whole coaching staff does. Our motto is ‘make the big time where you’re at.’ Our headmaster Mr. [David] Owen always says that. Even though we’re a smaller school, why can’t we make the big time where we’re at?”

The process started out by trying to make a film room for the Rebels that they could use during the week of practice and even before the start of a game. The original plan was to add an additional room to the existing locker room. Instead, they opened up the wall to connect what used to be the junior high locker room to the coaches’ office and the main locker room.

In the film room, there is enough room for 48 chairs. Chairs are separated into 12 rows with four chairs in a row and are staggered on risers. Film can either be shown via a projector that hangs off the ceiling or on a 65-inch wide-screen television.

After starting work on the film room, the Rebels’ coaching staff decided to also redo the locker room.

“We’re always constantly thinking of ways that we can upgrade,” Allen said. “I had that idea in my head for a couple of years, and we finally figured out a way to make it a reality. We’re just trying to make it big time where we’re at.”

Each locker has the CA logo in the middle, where shirts and shorts go. There is a cubby for every player’s helmet, which has blue LED lights at the top, illuminating the helmet. On top, players have room to put their pads.

On the ceiling, there is a plexiglass CA logo that has lights hidden behind it.

“I just feel when you walk into someone’s locker room, it tells you a lot about their program,” Allen said. “I think when you have a high pride level, it makes you better at anything you do, and they [the players] understand that it’s a big deal for us.”

As of now, there is only one plexiglass light, but there is room to add two more.

“There’s always improvements you can make to your program,” Allen said. “I feel like if you stay where you’re at, you’re going to get stagnant. We’ll continue in the future trying to do projects that make our campus and our athletic facilities look better.”

Some future projects include clubhouses for both baseball and softball teams.

The renovation costs have been relatively low for the amount of work done, since most of the materials, like the new carpet, risers and work cost, have been donated.

Sheppard Homework’s, All-Star Graphix, Harris Carpets, Allen Scrap and Jonathan Ford were the suppliers for the renovation. Coach Kyle Jackson and Bylsma were the two that put in a lot of the installation and work in the locker and film rooms.