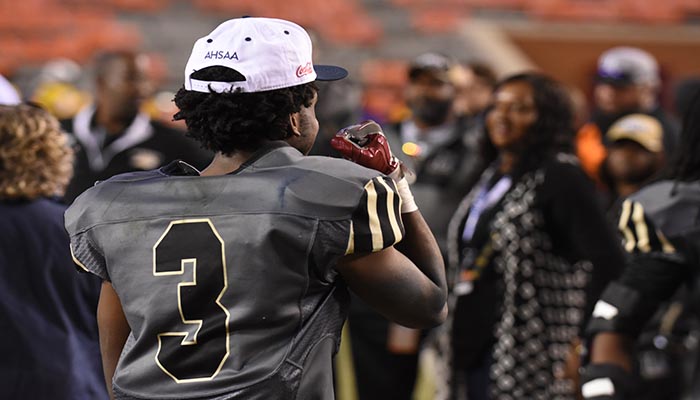 Standout football and basketball player and 2020 Lanett graduate Jaquarius “Quae” Houston, 18, died suddenly this past weekend. The details of his death have not been released.

Houston won four state championships as a Panther, winning two in both football and basketball.

He started at both receiver and defensive back in football. In his senior season, he finished with 405 yards and eight touchdowns.

In his final football game, Houston finished with five catches for 51 yards and a touchdown.

Houston was committed to play football at Faulkner University in the fall.

“We are deeply saddened by the passing of incoming freshman Quae Houston, a talented young man with a bright future,” Faulkner Head Football Coach Tommy Wasden said in a statement. “Our condolences and prayers are with his family. May God provide them with some measure of comfort and peace.”

Houston was a nephew to Lanett football coach Clifford Story and was extremely close to the family.

“Coach Story is like my father,” Houston said of Story in late June. “He always stayed on me, making sure that I had the right ACT scores to make the jump and making sure that I was preparing myself for the next level. He always told me that I could play at the next level, since the 10th grade. That’s when I really started to take football seriously. I thank coach Story out of everybody.”

He also started for the Panthers’ basketball team and was a key distributor for the team that played for the 1A State Championship game in late January.

Houston graduated fifth in his class from Lanett High School at the end of May. He was part of the school’s Beta Club.

“Quae was an exceptional student. He demonstrated academic excellence in the classroom,” Lanett City Schools Superintendent Jennifer Boyd said. “He excelled on the basketball court and the football field.”

Boyd said the quality about Houston that stuck out most to her through her time as principal of Lanett High School and as superintendent was his character.

“You saw his character when he was on the field and on the court,” Boyd said. “You saw it in the classroom. Quae was exactly the type of student that any principal would want. He did exactly what was asked of him, and he always maintained a positive attitude. He had just exemplary character.”

Houston’s funeral will be Friday at noon EST at Essie J. Handy Memorial Cemetery in LaFayette.