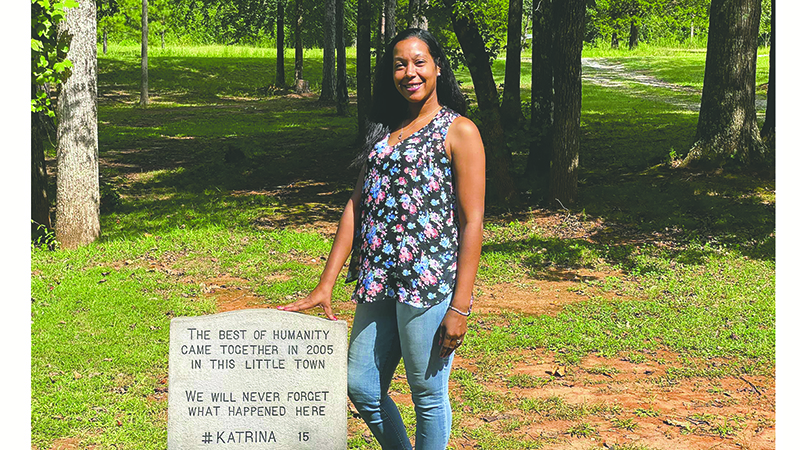 Tonya Scroggins stands next to her 160-pound memorial for the 15th year anniversary for Hurricane Katrina.

LANETT — Saturday marks the 15th anniversary of Hurricane Katrina washing ashore on the Mississippi Gulf Coast. The Category 5 storm is considered one of the worst natural disasters in U.S. history with over 1,200 people killed and $125 billion in damage.

A ceremony hosted by the Gulf Coast Center for Law and Policy will recall that terrible day and those who lost their lives. It will also pay tribute to the many heroic acts of those helping their fellow man under the most difficult of conditions.

A highlight of Saturday’s events will be the unveiling of a new concrete monument hailing this coming together made by Tonya Scroggins of Lanett.

“It has really been amazing,” she told The Valley Times-News on Friday. “Warren Tidwell, the volunteer coordinator for the Hometown Organizing Project in Auburn, reached out to me to see if I could do this. It’s a beautiful thing they are doing, and I was more than happy to assist them with it. Believe me, this was a labor of love. They picked it up yesterday, and it will be part of tomorrow’s ceremony, and I am so glad to have been able to do something like this. It’s truly an honor.”

The monument reads: “The best of humanity came together in 2005 in this little town, and we will never forget what happened here. #Katrina15 August 29, 2020.”

Hometown Organizing Project is a multi-chapter non-profit that is a part of a Katrina 15 remembrance on the Gulf Coast, specifically in Hancock County, Mississippi. Tidwell and his wife worked in Pearlington, Mississippi as volunteers after Hurricane Katrina for two years. Pearlington, a town of 1,600, was hit hard by the hurricane. Various reports say all but two homes, almost every building and almost every vehicle in the town was destroyed by Katrina. A storm surge went at least four-and-a-half miles inland.

When Tidwell became a part of this project, he wanted to come up with a monument or memorial but was struggling to find something suitable. That’s when he turned to his wife, who works at Valley Haven School and has a connection with Scroggins.

“[Saturday] at 10 a.m., there will be a ceremony in Pearlington unveiling the monument,” Tidwell said.  “It weighs about 160 pounds and is the back of my Suburban and we are going to drive it down,” he continued.

Because of the COVID-19 pandemic, there will only be a limited number of people at the ceremony.

Along with the Katrina 15 project, Hometown Organizing Project has distributed nearly 100,000 masks throughout the state of Alabama.

The Katrina 15 that’s inscribed on the monument is significant for two reasons. One, it’s 15 years since it happened, and two, there were 15 organizations that came together to rebuild the town.

“It’s amazing what’s going on,” Scroggins said. “This project has been near and dear to my heart. We should never forget what happened with Katrina. Those who died in the storm, and those who suffered so much in its aftermath should never be forgotten.”

Scroggins is the third-generation member of her family to make concrete monuments. It started with her grandfather, the Rev. O.D. Hill, who wanted to have a headstone for his mother’s grave when she passed. Not finding anyone who would do it for him at an affordable price, he decided to build one himself. It turned out so well that other people wanted him to make them headstones, too. He eventually branched out into other kinds of memorials.

“He taught my dad, Fred Johnson, how to do it,” Scroggins said. “I learned how to do it by helping him. He continued to do it up until a few weeks ago when he decided to give it up.”

Scroggins is far from alone in continuing this family tradition. Her husband, Clifton Scroggins, helps her along with their children, Noah, Caydence, Isaiah and even three-year-old Kairo.

Tonya recently got a concrete mixer. She said that will really help the family in monument making as it’s a big improvement over a shovel and wheelbarrow to mix the concrete.

“It has been such an honor to be part of the Katrina 15 project,” Scroggins said. “I would love for my family and I to go down there one day to see it. It’s such a blessing to be part of something like this. Warren has done a great job with this. I know it is near and dear to his heart. I’m so glad he reached out to me to help with it.”