Lanett, Valley face off in rivalry game on Friday 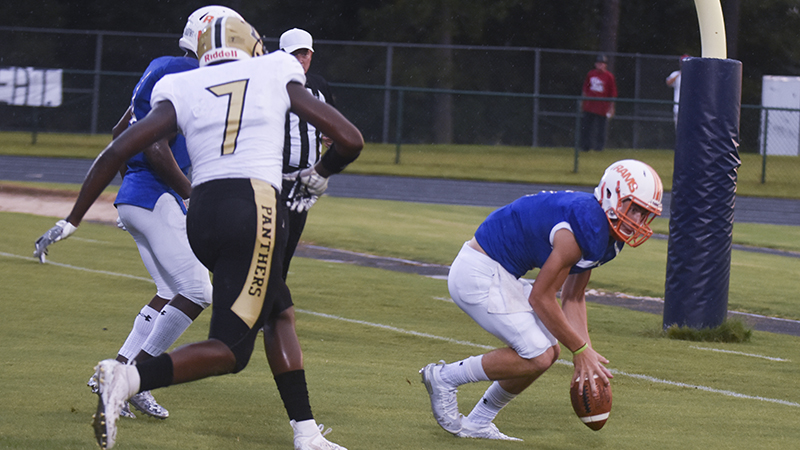 Lanett senior Trey Abner puts pressure on Valley quarterback Will Kennedy in the Panthers win in 2019. The two rivals will face off on Friday for the first time this decade.-- File

When asked at the iHeart Radio Media Days which game he was looking forward to this season, Valley starting quarterback Will Kennedy said Lanett.

“For 365 days after we played, whoever won has bragging rights,” Kennedy said then.

On Friday night, the rivalry will make its way to Morgan-Washburne Stadium when the Lanett Panthers host the Valley Rams.

Even though this is one of the biggest games of the year for both communities, Valley head coach Adam Hunter and Story both are treating Friday’s night matchup like any other game, preparing the same way they did the week before.

“We’re treating it like a regular game,” Hunter said. “We’re trying to prepare these kids to play another game. We’re thankful we’re getting an opportunity to play, with all the conditions right now, so we’re going to approach it as another game. In the back of our mind, it is Lanett, and it is a rivalry game so we want to get after it. Our kids are going to be ready.”

In Valley’s win against Beauregard, senior running back Josh Heath was a difference-maker, as he rushed for nearly 200 yards and finished with three touchdowns. Story said a key for the Panthers would be shutting down the senior.

“Based on game one, he’s the nucleus, him and [Quez] Trammell at receiver,” Story said. “We feel like he’s the key. If we can key in on him and stop him and [Kaylen] Sherrell and Trammell, we’ll have a chance to win the ball game.”

The Panthers have been an explosive offensive team, being able to score quickly and at great volume. With three receivers that have received scholarship offers (Hurston, Seidrion Langston and Trey Abner), it will be tough for Valley to key in on a single player.

“We’re going to stick to what we’ve been doing. That’s all we can do and just get after them,” Hunter said.

The biggest key for either team to succeed will be special teams. In their opening wins, both teams were able to dominate the third phase of the game.

In Valley’s win, Sherrell was a difference-maker, as he returned several punts and gave the Rams great field position to start drives. Senior Tino Linson also returned a kickoff for a touchdown, while Quen Story blocked a punt, which was scooped and scored by Josh Bailey.

Lanett opened the game against Georgiana with a 90-yard kickoff return for a touchdown by D’Quez Madden and later in the game, senior Larontavious Tae-Tae Hurston returned a punt for a touchdown.

“We definitely need to win all three phases of the game to beat Lanett,” Hunter said. “They’re going to be well-coached. We have to do everything right.”

“It’s going to be extremely big,” Story said. “Special teams are what I call hidden points. A lot of times, you hope for one, but you really don’t expect one. I didn’t expect that to happen, but those 12 points we put up on that board meant a lot moving ahead.”

The two teams have split the last two matchups, both of which have been extremely close at the end of the game. In 2018, the Rams defeated the Panthers 28-22 on the road, while Lanett answered in 2019 with a 25-21 win.

In both of those games, the winning team was able to jump ahead early, and Hunter believes the 2020 matchup will follow that trend.

The 89th Valley-Lanett rivalry will start at 8 p.m. This is the first time the Panthers have played in Morgan-Washburne Stadium since their second-round playoff win against Elba in 2019. (Lanett was home against Isabella in the third round, but it played at the Sportsplex due to the amount of rain its field got during that win).

“It’s going to feel great because we have that home environment,” Abner said. “It’s going to be live tomorrow, so we have to play how we always play.”