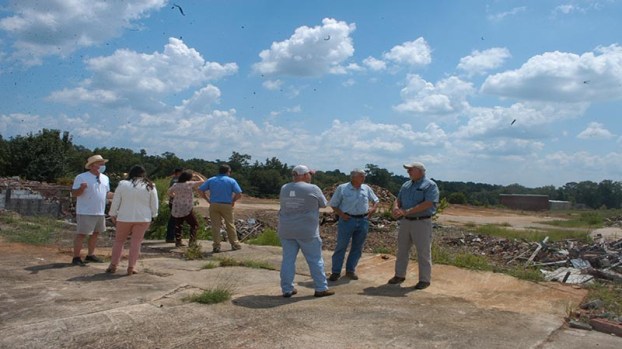 A Wednesday afternoon discussion of what can be done with the Fairfax Mill site concluded with attendees walking from Fairfax fire station to a nearby site that overlooks the debris field where the mill once sat.The City of Valley has a $500,000 Brownfields grant to remove debris from the site.

VALLEY — On Wednesday afternoon, an overflow crowd filled the conference room at the new East Alabama fire station on the historic village green in Fairfax to hear plans of possibly having a new village green in the community.

Approximately 25 people were present to hear an update on current plans to clean up the mill site and to get an idea of how long it might take. Among those present were Mayor Leonard Riley, Council Member Jim Jones, Whit Bradley, Jones’ opponent in the Aug. 25 municipal election, East Alabama Water, Sewer and Fire Protection General Manager Tony Segrest and Chris Busby of the Chambers County Development Authority (CCDA).

The City of Valley has owned the 16-acre site for the past two years and has secured a $500,000 federal Brownfields environmental grant that can be used in cleaning up the site.

McCown said that there are an estimated 100 debris piles on the site, and some of them are massive. These piles have been tested, and 18 of them contain contaminants such as asbestos, lead-based paint and petroleum products. These items will have to be taken to a Sub-Title D landfill for proper disposal. Such landfills have liners that keep material from seeping into the water table. The nearest one is in Salem, in Lee County.

The remaining piles will have to be gone through to remove metal and boards for separate removal. Piles without this are considered inert material and can remain on site to fill in holes and level out the land.

The city’s planning and development director, Travis Carter, said the first step in the process is to clean up the site and make it safe.

“Hopefully, this grant will let us get it cleaned up, the holes filled in and for the site to be level,” he said.

Fairfax Mill went into production in 1915 and remained in business through the year 2004. In recent years, demolition companies have owned the site, seeking to take down the building and selling anything of value they could find. There was a huge fire there several years ago burning up much of the non-salvageable wood left on the site. There’s still lots of metal, broken brick and concrete with rebar plainly visible on the site.

“What to do with the remaining materials is a challenge,” McCown said.

He compared it to tearing down an old house.

“There’s a lot of mixed materials such as shingles, boards with lead-based paint and petroleum-based materials. You have to be careful in how you dispose of it,” he said.

There’s also the problem of this site being right across the street from a school, churches and a number of private homes.

“It’s a dangerous place with open manholes, concrete pads and old sidewalks that are not safe,” McCown said.

McCown commended the city on having sought and secured a Brownfields grant and having an environmental assessment done for the property.

The Alabama Department of Environmental Management (ADEM) has studied the site and found that it can be redeveloped for a new purpose, most likely green space.

McCown said the city had four options: (1) to do nothing and just let it sit there in its present condition, (2) convert it into a landfill, (3) take everything that’s there now to a landfill and (4) take away the contaminated portions and leave the inert material on site to help smooth out the site and make it level.

Of those four options, number 4 is the only one that’s appealing. Numbers 1 and 2 can quickly be ruled out, and number 3 would be cost prohibitive.

There’s a considerable amount of inert material on the site right now that could be used in leveling out the site. There’s a concrete clearwell that needs to be covered over for the site to be safe. There’s a sidewalk area not far from the new fire station that has some steep drops onto the mill site. Such places are considered dangerous and need to be smoothed out.

“We think we have a solid plan,” McCown said. “Everything would be covered over and grass growing on top of it.”

There’s an estimated 8,500 cubic yards of inert material on the site right now. Top soil can be brought in from other locations in the city to be added to it and make the site level.

The current plan appears to be to first remove the contaminated material, clean it up as much as possible, smooth it out and grass it over.

Future plans of possibly converting it into a park with walking trails would have to be addressed later and would be contingent on any future grant money being available. There’s also the headache of keeping 16 acres of grass cut during the growing season. The present amount of grass being cut keeps the city busy.

“We think we can award this in September,” McCown said. “I think we can have men and machines on the site once the bid is awarded. I think we can get it done in four to five months.”

The city’s Public Works Department will have a prominent role as well. The city’s 20% match for the grant will be met with in-kind labor.

“I would love to see a master plan for the site,” Jones said. “I’d love to see a plan with amenities such as walking trails and perhaps a community garden across from the school. Getting it cleaned up is the first step, but getting it to something we will all like may take several years. Brownfields programs like to see their projects turned into something nice. A Brownfield grant can lead to other kinds of grants.”

For now, McCown said, the task is to remove a blighted, dangerous area and convert it into something pleasant in appearance and safe.

A woman in the audience asked if present structures, such as a concrete slab, could remain and be used for recreational purposes.

McCown said that all ideas would be considered.

Jones liked the idea of opening it up to the community to suggest ideas.

“Our citizens should have input on this,” he said. “I’m sure they can suggest some good ideas.”

Carter said that structures such as concrete slabs would be the final items removed in the cleanup.

“The problem with slabs,” he said, “is that they are level with no slope. When it rains, water puddles up on them.”

“Our main goal,” said a woman present, “should be to get rid of an eyesore.”

Priority may be given to cleaning up the south end first. That’s the area closest to  Fairfax Elementary School.

Jones said the Fairfax Mill site had been a sore spot for the city for years.

“The problem we had was that it was in an industrial park and outside the city limits,” he said. “The city surrounded it, but it was not in our jurisdiction, and we had no control over what happened there. We had to work with the county to get it out of industrial park status.”

The city was able to annex it after purchasing it from the previous owner for $125,000.

A man present said that he lived on Boulevard near the school and that cleaning up the site would increase his property value.

“I just don’t want it to become a hangout,” he said.

Another person present asked where the trucks would be leaving the site to haul away the contaminated dirt. Carter said it would be on the far side of Boulevard near the former site of one of the mill’s loading docks. The parking lot for Fairfax Methodist Church is nearby.

Jones said that future meetings would be held to discuss this and that he’d like to be getting ideas from residents of the neighborhood.

“Everything starts with a dream or a vision,” McCown said.

Lions Club to hand out masks

VALLEY — In the effort to help keep people safe during the continuing coronavirus pandemic, the Valley Lions Club will... read more