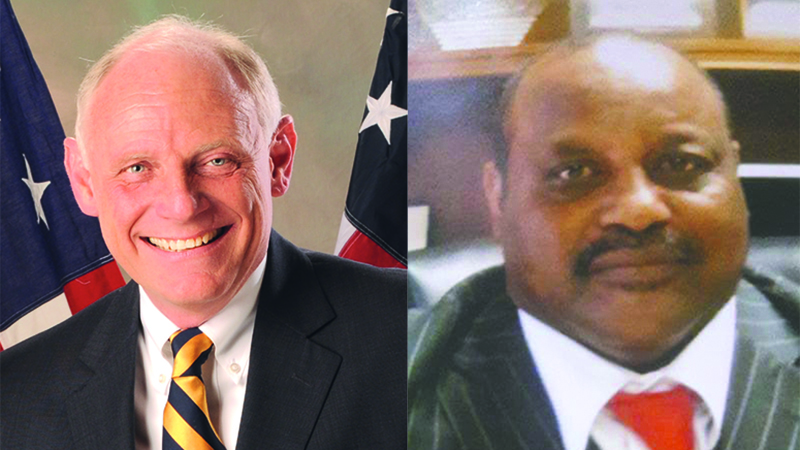 LANETT — Lanett’s mayoral race between incumbent Kyle McCoy and challenger Stanley Roberts comes down to a choice of continuing the course of the past four years or starting something new.

“I think the state of our city is good and the outlook for the future is even better,” said Mayor McCoy. “I am proud of where we are today. It’s a testament to how well this council is working together, the good work being done by our department heads and the fact we are getting along so well with surrounding cities, the Chambers County Commission and the Chambers County Development Authority (CCDA).”

McCoy said he’d like to continue building on what’s been done the past four years.

“The redevelopment of downtown is a good start,” he said. “But, I don’t want us to see it as the beginning and the end. I would like to see the entire city having an attractive appearance. That is so important for future growth. It makes people who live here feeling better about their hometown, and it makes a good impression on people who are visiting. That good first impression is vital to those who are looking to locate a new business. Retail is vital for our future, and we need to project Lanett as a welcoming place for small businesses and corporations.”

In the past four years, the city took a major step toward turning something negative into a positive by acquiring the 25-acre Lanett Mill site, having a major cleanup and attracting Tractor Supply to locate there. There’s a master plan to develop the remainder of the site as a commercial zone with at least seven or eight new stores. The mill tower will remain as a quaint focal point. The shopping district will be accessed by a main road leading to a roundabout circling the tower.

“We were moving ahead with this, but COVID-19 set us – and everyone else – back in the spring,” McCoy said. “We will continue to have a high priority on attracting retail business. New business is key to building a tax base and creating jobs. We will stay focused on long-term growth and the economic health of our city.”

McCoy said the city would continue to make improvements in basic services such as water, sewage and city streets.

McCoy said he didn’t have a problem with the standard question of asking: “Are you better off than you were four years ago?”

“If you compare our present appearance with the way things were four years ago, I think anybody would have to say it’s better. There’s no denying there has been a vast improvement. People know where we were then and where we are now.”

McCoy is upbeat about the airport project. The city has gotten over $15 million in federal grants to make major improvements. A runway that was little more than 3,000 feet in length a couple of years ago is being lengthened to more than 5,400 feet.

Challenger Stanley Roberts would like to see many things done differently. He told The Valley Times-News that the mill cleanup could have been handled better.

“They just pushed everything to the back side of the site. They didn’t remove it,” he said. “You don’t make it better by sweeping it under the rug.”

He said that downtown beautification had not been McCoy’s idea alone, that it had been extensively discussed when he had been on the council four years ago.

“It has been over budgeted,” he said, making the case that too much had been spent on it. “I don’t understand why they have planted over 100 trees.”

He said the airport development had been a good thing but that the present council had not been good stewards in how it was being done. He said the city could have been more sensitive to the requests of nearby landowners. He said there was a problem in taking excessive amounts of money from the federal government.

“We don’t need to be dependent on it,” he said. “We need to be more self sufficient.”

Roberts said that some neighborhoods had needs that were being neglected. There’s a huge water tank in Jackson Heights, but some of the surrounding streets have water pressure problems.

“Houses that catch fire there burn down because the fire department can’t get enough water on the fire,” Roberts said. “Rather than pave streets, we need to be replacing water pipes and getting the water pressure up before we do any paving.”

Roberts said that Lanett was a “one-stop-shop” when it came to utility services, and he didn’t know if it was a good thing or a bad thing. Residents in surrounding cities may be getting better deals on electricity, water and sewage. He also questioned whether the city should have contracted garbage service to a private provider.

The city might be better off, he said, by buying two or three new trucks and hiring the needed workers. New trucks, he said, could also be used in paving city streets.

“I can remember when the city did its own paving,” he said. “That might be better than hiring a contractor.”

Roberts said the city’s utility customers were in for a break.

“Why can’t we have levelized rates?” he asked. “People on limited incomes get hit hard in the summer time when they are using more electricity to cool their homes and in the winter months when they are heating them. By leveling out their bills, they won’t have to pay as much in the peak periods.”

Roberts said he wanted to see more small businesses in the city. He said he could remember when businesses like Driver’s Bakery thrived in the downtown area.

“If the Chamber of Commerce and the CCDA isn’t getting us businesses, maybe we should be doing it on our own,” he said. “If West Point can rebuild their downtown area, we can do it, too. We don’t have a single bank in Lanett, and we are not building new homes. That’s not good.”

Roberts said when he was on the council he made sure to be the best representative he could be by taking the courses to become a certified municipal official.

“I’m the only one in the city now,” he said. “We need to have council members who do this. It helps you understand that there are innovative ways you can help the city save money. We need to be looking at ways to be more efficient. When I am mayor, each council member will be accountable to meeting the needs of their districts. We will talk about this a lot and find common ground in ways to do this. What we don’t need are more plans. We need action.”

Roberts said he was proud of what was done when he was on council, and they came up with a better traffic flow at the junction of Highways 29 and 50. A better traffic flow going into Kroger, he said, helped their business. The addition of a gas station helped it even more.

Roberts said he has a theme for his campaign: BAGL. It stands for bold, aggressive, godly leadership.

“We need to see it, want it and get it in a godly way,” he said. “Without leadership, you are lost. We should be the city that’s setting standards others follow. The way I look at it, if I am fixing my house, I can’t depend on others to bring me nails. I have to go get them myself. We need to be more self-sufficient in what we do.”