The Village thanked by City of Valley 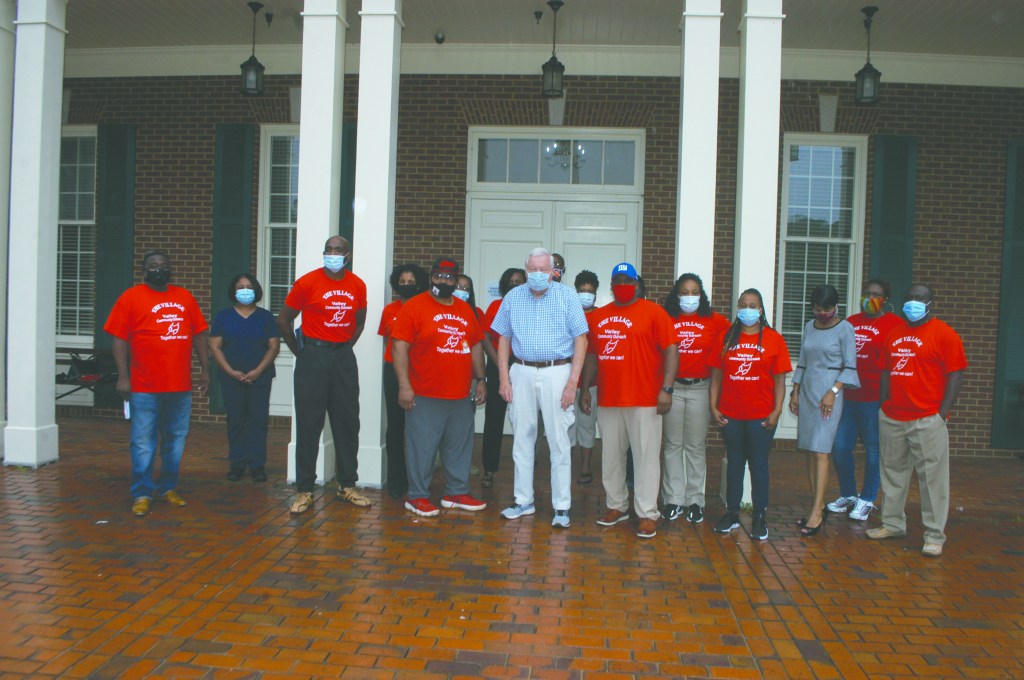 Members of Valley Community Outreach (a.k.a. The Village) received a mayor’s proclamation at Monday’s meeting of the Valley City Council. Many members of the organization grew up in Valley, graduated from Valley High and have gone on to successful careers. They now want to give back to the community they now hold as the special place they knew when they were young. The proclamation noted the good work being done by The Village, which includes efforts such as picking up litter off city streets, taking gift baskets to nursing homes, and holding book bag giveaways for local school children. --Wayne Clark

VALLEY — At Monday’s meeting, Mayor Leonard Riley received something he wouldn’t have expected in a million years – a framed collage of him getting his head shaved 35 years ago in the lunchroom at Valley High School. He was the school’s principal at the time and was making good on a bet he’d made with the football team. After the Rams had struggled to an 0-4 start, he made a vow to them that if they won the rest of their games to complete the regular season 6-4 he would have his head shaved and turn it the school colors of orange and blue.

The photos in the frame show that happening after the football team pulled off that unlikely feat.

It was presented to him by members of Valley Community Outreach (a.k.a. The Village) in appreciation of both the job he did back then as principal and what he’s now doing for the city as mayor.

“I haven’t seen these photos in a long time,” said Riley, who was smiling broadly. “I’m grateful to have been your principal and am pleased to see that you all have done well and want to give back. It’s so good to see all of you.”

A large delegation of The Village was at Monday’s meeting to thank the city for their assistance in their continuing efforts to make Valley a better place to live. Many of those present grew up in the local area, graduated from Valley High in the 1980s and have gone on to successful careers.

A spokesman for the group, Clint Gilder, was a member of that 1985 team. He has since had a 28-year career with the U.S. Army and is currently stationed at Fort Benning. Others who are active with The Village live in the Birmingham or Atlanta areas but have always felt close to the place where they grew up.

“We had lots of mentors who challenged us to never quit and to become the best versions of ourselves,” Gilder told the council. “It shaped us into being the kind of people we are today. Mr. Riley was part of The Village we grew up in.”

Riley said he recognized a number of his former students even though they were wearing masks because of COVID-19.

“I want all of you to know that these pictures bring back lots of memories. I remember it taking place in the lunchroom. Lisa Mason, as she was known then, shaved my head.”

The Village received a framed proclamation commending them for their continuing efforts to support the elderly, the disabled and families in need, and to clean debris off the roadsides in neighborhoods from Fairfax, Morris Line, Boyd’s Circle and surrounding areas. They filled 150 bags with trash in one recent cleanup.

On Saturday, Sept. 19, members of The Village will be taking gift baskets to EAMC-Lanier Nursing Home in Valley, Diversicare in Lanett and to LaFayette Nursing Home and LaFayette Extended Care. They are also planning coat and blanket giveaways for the coming winter, a Thanksgiving food drive and a Christmas toy drive.