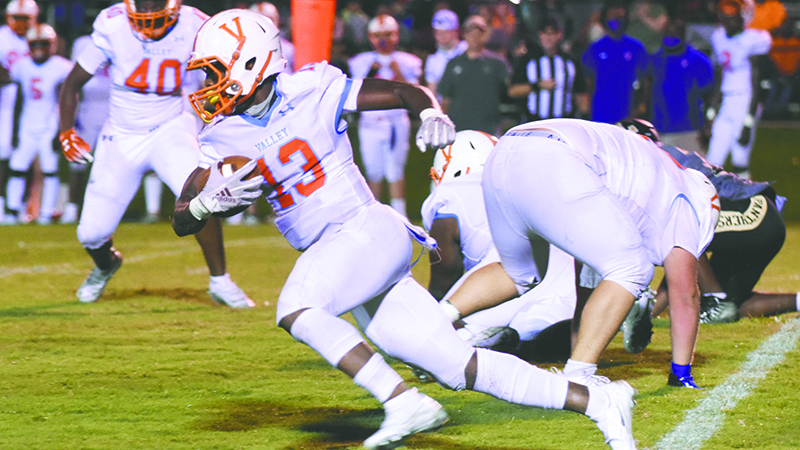 Valley running back Josh Heath breaks into the open field during Friday night’s game against Lanett. Heath scored on 2, 10 and 15-yard runs as the Rams defeated Lanett 20-14 in overtime. --Photo by Daniel Evans

It was fitting that Friday’s game ended in the hands of Valley running back Josh Heath, who had a three-touchdown night to lift the Rams past rival Lanett in overtime.

In overtime, Heath took a direct snap and followed running back Jayden Angel into a scrum of Lanett and Valley players. Angel threw enough of a block for Heath to cut back and lower his shoulder. When he made contact with a Lanett defender, Heath spun and started furiously backpedaling into the end zone, giving Valley a 20-14 victory over the defending 1A state champions.

“I just felt that we could get it,” Valley head coach Adam Hunter said. “We have a good field goal kicker, so if we didn’t get it [before fourth down] I felt that we had it. It’s just unbelievable. We faced adversity tonight. Lanett was ready to play. We were kind of timid at first. They were hitting us in the mouth. My hat is off to coach [Clifford Story]. We had to rise up and work as a team to get back in this thing.”

Heath was Lanett’s main focal point on defense coming into the game, and the senior showed why on Friday night.

He toted the ball 31 times for 111 yards and three touchdowns.

“I think we did fairly well against him,” Lanett head coach Clifford Story said about the Rams’ starting running back. “He’s a good running back, and we knew that we were going to have to stop a good running back. Right there at the end, he got a crease, and that’s what good backs do, they find holes and run the ball.”

The Panthers took the lead on the first possession of the game when quarterback MJ Atkinson lifted a pass to receiver Jay Gibson, who made a leaping grab in the back of the end zone. The Panthers converted the two-point conversion when junior D’Quez Madden charged around left end.

Valley answered late in the second quarter when Heath scored his first touchdown. He plowed his way up the middle for the score.

The score remained the same until late in the fourth quarter.

After Lanett struggled on offense and was forced to punt, the Panthers kicked it from within their own 20-yard line.

Valley receiver Kaylen Sherrell caught the ball around his own 50 and zipped down the left side of the field. He zigged and zagged his way down to the Panthers 30-yard line.

“We talk to Sherrell all the time. He does a really good job on the return,” Hunter said. “We asked him to give us some yards, and that’s huge.”

From there, it took just two plays, a 15-yard pass to Romel Jackson on a curl route and a 15-yard run by Heath, for Valley to take its first lead of the game.

The Panthers tied the game with roughly 90 seconds left to play when Atkinson lofted a pass to Larontavious “Tae-Tae” Hurston in the back of the end zone. The ball hit Hurston’s hands and popped into the air. He then dove for the ball, snagging it right before it hit the grass, tying the game at 14.

“It was a great catch. The ball was batted and tipped, and he fought for it,” Story said. “Tae-Tae has been here a long time. He understands the big-game moments.”

“The defense played good. Other than the [Hurston] touchdown, they really played good,” Hunter said. “We need to get better offensively to compete, but we’re going to go back and work on it this week.”

The Rams took over and ended the game two plays later.

The Panthers struggled to keep possession throughout the game, finishing with nine turnovers. At one point, the Panthers finished seven of eight possessions with a turnover.

Next week, Lanett (1-1) will host B.B. Comer in their first region game of the year, while Valley (2-0) will host Carver for its first regional game.