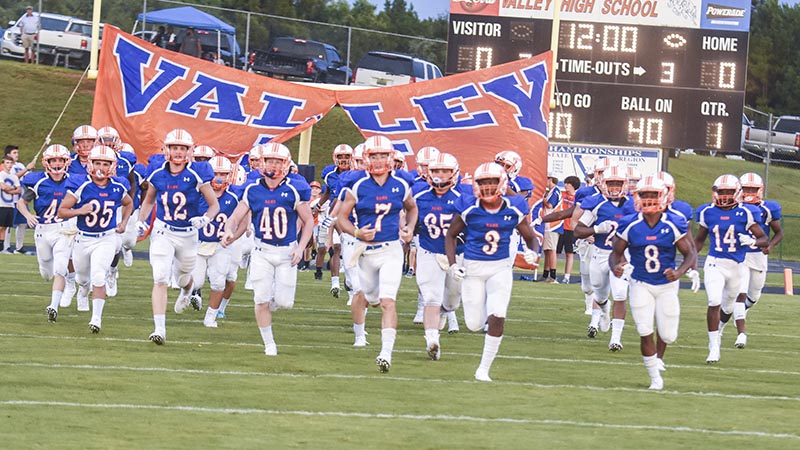 Football in Chambers County will be back when the Valley Rams welcome in the Beauregard Hornets on Friday night. Friday will also be head coach Adam Hunters’ first game as a head football coach.

The Rams and Hornets have faced off the last four years as regional opponents, splitting the series. Valley has won the last two games, winning 27-0 in 2019 and 41-20 in 2018.

Even though the Rams were able to come out on top pretty handily the last two years, Hunter is focused on what the Hornets are going to look like in 2020.

In both of those matchups, the Rams were able to thrive in the running game, as a Ram running back has surpassed 134 yards in both games.

“You want to be as balanced as much as you can on offense,” Hunter said. “We’re going to be a run team that sets up the pass, play-action and some boot stuff. We want to be able to run the football, that’s most important. If we can run the football, we think we can control the game a little bit.”

The running game is an integral part of the Rams offense, but a big question mark for the Rams in 2020 is how well will their offensive line hold up, as the entire starting five from 2019 are no longer on the team? While the lack of experience is a flaw, Hunter believes his line will be able to hold up because they play hard every step of the way.

Harris is a three-star prospect and is listed as the No. 29 defensive tackle in the 2022 class and the No. 14 player from the state of Alabama.

“He’s going to be really physical,” Hunter said. “He is quick off the ball. He uses his hands really well, so it’s going to be one of those instances where we’ve got to be good and meet his physicality.”

Will Kennedy will be the Rams starter on Friday night. The senior had a rocky start to his junior year, but Hunter said that he has developed and matured from his junior to senior seasons.

“Will’s a different quarterback then he was last year. That year of maturity has really helped him,” Hunter said. “He’s taken the offense, learned it and applied himself as a leader in the huddle and on the field. Your quarterback is the leader of the offense, and that’s what his role is. He’s earned it. It wasn’t just given to him.”

Kickoff is set for 8 p.m. at the Sportsplex.