Blount talks about recreation, sports in 2020 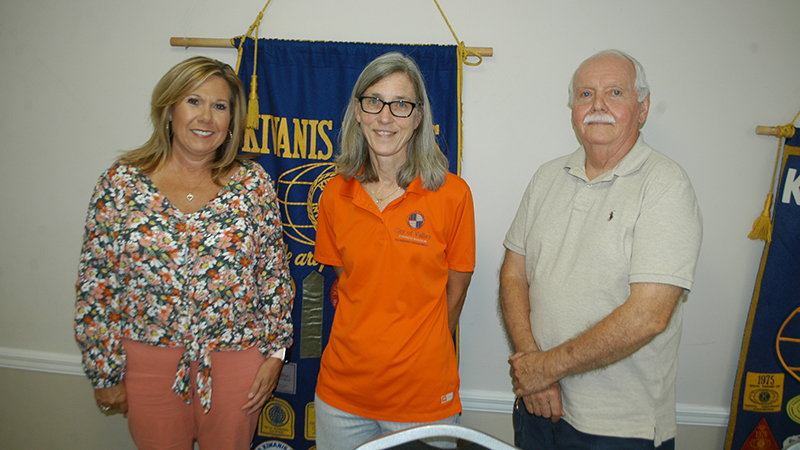 VALLEY — Valley Parks and Recreation Director Laurie Blount said that 2020 has been the most challenging year she has had in her career in recreation management but that things are slowly getting back to the feel of normalcy.

“It’s been an unusual year,” she said to members of the Kiwanis Club of Valley at the Wednesday meeting. “There was a time when we sat in an empty building for several weeks. Then, we started cleaning and sanitizing everything and were open on a limited basis. We’ve been very careful about social distancing. We have removed some machines in the fitness room so that everyone is six feet apart. To enter the building, everyone’s temperature is checked, and they have to wear masks.”

Participation in the fitness room is limited to 15 people at a time. The machines are wiped down between users. While the restrooms are still open, the shower areas in the Community Center are closed.

“We just don’t have the manpower to clean them the way they need to be,” Blount said. “We’ve also closed the hot tub for the same reason.”

VPR’s youth baseball season went through a lengthy delay before having a four-week season late in the summer.

“I think everyone had a good time,” Blount said. “I’m glad we were able to have something of a season. We have canceled youth football this year. It’s just too risky with all the contact and the sweating that’s taking place.”

Blount said she’s open to ideas on the kinds of recreation that can be offered while keeping the participants safe. Something new that will be starting in mid September at Valley Sportsplex is whiffle ball and kickball.

“These are family-friendly sports that can take place with social distancing,” Blount said. “It’s open to people of all ages. If we have enough people interested in playing, we could have some leagues. It’s my understanding whiffle ball and kickball were really popular at one time. I would love for you to come out and try it. If anyone has ideas about sports, we can safely play we will listen to their ideas.”

Blount said that Valley Parks & Recreation is trying to figure out how to have a safe fall festival. One idea is to have a scarecrow trail. There would be a line of scarecrows made by sponsors, and kids would judge them while sitting in a car and passing by at slow speed. First, second and third-place prizes would be awarded, and each child would receive a bag of candy that had never been touched by human hands.

“We want to do something for Halloween, and we want to have our Christmas events. The last thing we want to do is cancel the Merry Go Round. If we can figure out a way to do it safely, we will. We are open to ideas from the public. We think we have done well in protecting the public thus far. No one has knocked on our door and told us we were a hot spot and had to shut down. To my knowledge, no one has gotten COVID by coming to the Community Center.”

Blount said that for most people Community Center memberships were $17 a month. It’s free for those who participate in SilverSneakers and for those who between 18 and 64 who have Blue Cross/Blue Shield Prime.

“The insurance pays for them to participate,” she said, making the point that wellness reduces insurance costs.

Blount said that Valley Senior Center remains closed as a COVID-19 precaution but that some seniors had been coming to the Community Center to participate in social distance bingo sessions that had been taking place in the big gym.

“We are very happy to be serving a total of 115 seniors in our meal delivery program,” she said. “We are one of few cities in Alabama that’s feeding seniors five days a week.”

Valley Farmer’s Market completed its summer season this past Friday.

“I guess you could say we had an okay season,” Blount said. “It wasn’t great but could have been worse. I think the farmers liked people standing in line rather than crowding around their table. We will have them back with fall produce right before Thanksgiving.”

Blount cited Dance2Fit as one of the more popular classes being offered at the Community Center. She said that many participants found it something they really liked once they stuck it out for a few sessions.

“They didn’t know what they had been missing out on by not doing it,” she said.

Volleyball, pickleball and racquetball are popular activities on Saturdays. The racquetball courts are limited to two players at a time.

Blount said that a good many Point University students had been coming to the Community Center.

“It’s hard to get them in at one time,” she said. “They have 19 teams, and we have one fitness room that’s limited to 15 people at one time. We want you to wear a mask when you enter the door at the Community Center or the gate at the Sportsplex,” Blount said. “You can take it off once you get to the area where you work out. We are doing the best we can at the Community Center and rolling right along.”