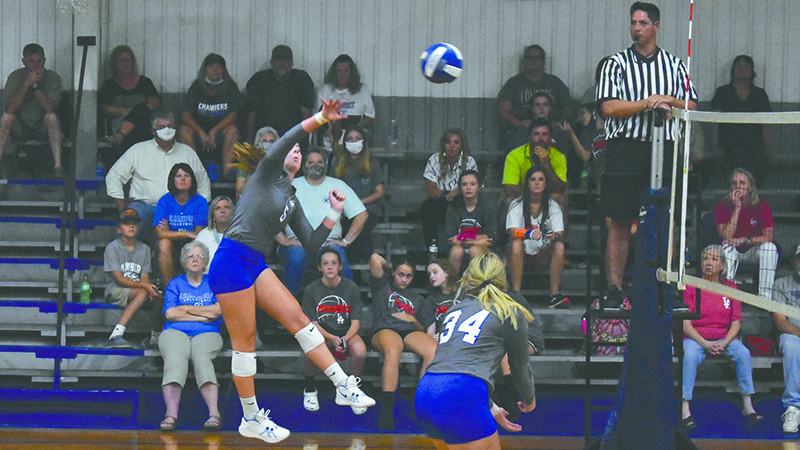 It took just three sets for the Chambers Academy Rebels volleyball team to take down Lowndes Academy and claim its fourth win of the season.

“They’re playing good this season,” head coach Randy Bonds said. “We rotated in some players throughout the game just to get them warmed up. We have a pretty challenging match this Thursday. They’re playing just a solid round of volleyball.”

Chambers came out strong in the first set, jumping on Lowndes Academy quickly in the first set. It took the lead and never looked back, jumping from a 4-2 lead to a 10-4 lead, which quickly expanded to 15-5.

The second set went almost as well as the first set, as the Chambers Rebels took an 8-1 lead to start. By the time Lowndes Academy reached five points, Chambers had a commanding 15-point lead.

In the final set, Bonds rested several of his starters.

Lowndes started the third set hot, scoring the first four points. Chambers took the six of the next seven points to take a slim 6-5 lead. The Rebels took their biggest lead of the set after the two teams were tied at seven, as junior Claire Allen rattled off a couple aces. Lownes tied the score at 11, but Chambers never truly gave up the lead, winning 25-21 to seal the sweep.

Serving was the difference in the game. Chambers Academy finished with 18 aces during the three-set match, while giving up only a couple.

“We work on that a lot,” Bonds said. “We work on our serves heavily. We set very high goals for successful server ratios, and I expect them to reach it. They normally do a good job.”

Chambers finished with an 89% serve ratio on Tuesday.

So far this season, Bonds has been working with his team on the fundamentals.

“We’ve been working on a lot of fundamentals, a lot of rotations, a lot of stacks, just all-around volleyball,” Bonds said. “They’ve been showing up and playing very well as a team, which we work on a ton. They’ve been doing an excellent job.”

The Rebels host Edgewood on Thursday. The JV team plays first at 4 p.m. CT, with the varsity team following.