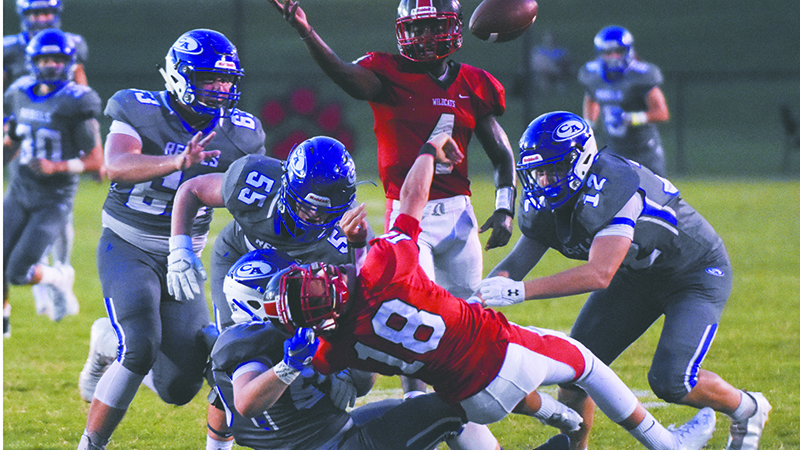 The No. 3 Chambers Academy Rebels continued their dominant success on Friday night, as they steamrolled Springwood 53-0 for their first regional win of the season.

“It’s huge [being 1-0 in the region],” head coach Jason Allen said. “It’s a rivalry game, so that’s big for us as well. Our seniors have never lost to Springwood in their high school career.”

The Rebels got on the board first when a band of Rebels sacked Wildcat quarterback Cooper Champion, who tried to flip the ball out of bounds as he was hit. The ball floated in the air and was snagged out of the air by Hunter Knox.

Knox went untouched into the end zone for the first score of the evening.

The Rebels defense continued their strong season, holding the Wildcats to just two first downs in the first half.

“We’ve played great defense all year,” Allen said. “We had a good first possession, got a silly penalty that gave them a first down. We’re playing outstanding defensively. We really got after them in the run game.”

The first team defense for the Rebels still has not given up a touchdown.

After forcing a three-and-out, the Rebels quickly drove downfield, as quarterback Payton Allen hit Jeremy Conway for a long gain.

Chambers scored when Jordan Benbrook powered his way to the end zone for a 28-yard score.

Shortly after, the Rebels started to air the ball out more. Payton Allen hit John White on a deep slant for a touchdown, and junior receiver TY Trammell was able to take a couple of short passes to the end zone, scoring on plays of 61 and 51 yards.

“He dropped a ball early, and I got on him, saying ‘don’t drop anymore’ and he didn’t,” Allen said. “We’ve got to get the ball in his hands any way we can. You saw what kind of speed he’s got.”

Overall, the Rebels were able to move the ball with ease. Payton Allen threw for 347 yards and completed 12-of-16 passes for four touchdowns, while Benbrook finished with 11 carries for 134 yards and a pair of touchdowns.

“We tried to take what they were giving us, and we threw the ball a lot in the first half,” Allen said. “They had six in the box, and they were doing a lot of blitzing. We just said ‘hey, if you’re going to do that, we’ll just throw the ball on the edges.’ We had a good bit of luck in the first half.”

Benbrook scored the game’s final touchdown when he broke through the Wildcats line for a 60-yard score.

The Wildcats failed to get much on offense through the first three quarters.

After Chambers scored on the final play of the third quarter, the Wildcats held the ball for the entire fourth quarter, while the clock ran unless there was an injury or timeout.

Tailback Johnathan “Jon-Jon” Johnson carried the load in the fourth quarter. The sophomore carried the ball 11 times in the quarter for a team-high 46 rushing yards. The Wildcats neared the end zone, but time ran out before they could get in the end zone.

“He’s a very talented kid. I think he’s going to be special for us,” Gartman said about Johnson. “He had some really good runs, cutting up on the buck sweep. Hopefully, we can work him in a little bit more toward the earlier part of the game when it matters more instead of just mop-up duty. He’s got some talent, and we’re going to get him a little more involved.”

The Rebels travel to Lowndes for their next contest on Sept. 11, while the Wildcats travel to Banks Academy.