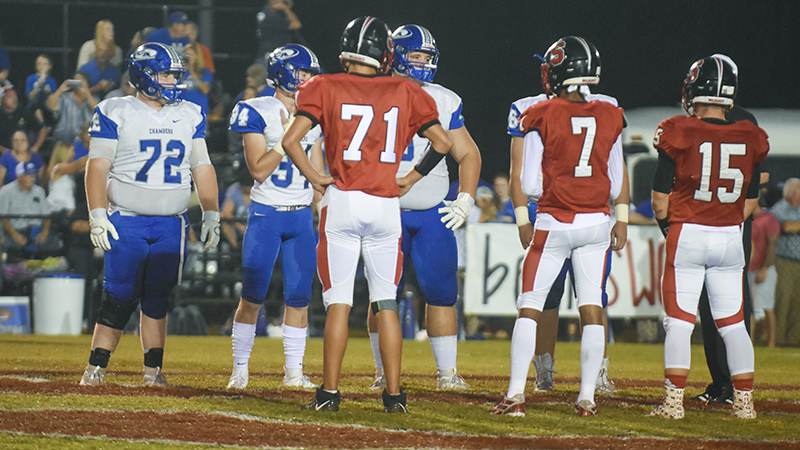 Forty-nine years ago, Chambers Academy defeated Springwood 27-12 on the road. Both teams were new programs, as the Rebels were in their second year as a team, while the Wildcats were in their inaugural season.

On Friday, the rivalry will have its 43rd chapter when the No. 3 Rebels travel to Springwood field.

“It’s a good rivalry,” Chambers Academy head coach Jason Allen. “We’re going over there for the second year in a row. Our kids are excited about the rivalry.”

The Rebels have dominated the rivalry the last five years, outscoring the Wildcats 236 to 88. In the last matchup, the Rebels won 50-0 and were led by their ground attack.

While still a team that can dominate on the ground, just as they did in Friday’s win against Abbeville, the Rebels are focused on a balanced attack.

“We’re going to be more balanced,” Allen said. “We’re not going to have the gaudy rushing numbers this year that we’ve had in the past because we feel we can do so many things in the passing game from a speed and quarterback standpoint. So far, we’ve been able to throw it around the yard and have some success.”

So far this season, the Wildcats have faced two teams that like to throw the ball downfield. With the Rebels doing a large amount of damage in the passing game in the first two weeks of the season, Springwood will largely face a familiar offense on Friday.

“With Payton Allen being a very good quarterback, a coach’s son and a senior now, they’re able to do a lot of things with his experience at quarterback,” Springwood head coach John Gartman said. “They’re pretty much in the shotgun all the time, whereas, in years past, they weren’t in the gun so much. Because of his talent and experience, they’ve been able to branch out and do more things on offense, and that’s made them even more difficult to defend.”

The Wildcats are focused on developing their offensive identity and being able to add to their Wing-T offense.

“The last two weeks have been kind of odd,” Gartman said. “Going into the first game of the year, we didn’t have the numbers to scrimmage the way that I wanted us to, so I didn’t feel that we were as sharp as we could have been. Going into the second game, we thought we were going to be without OJ [Tolbert], so we spent the whole week practicing as if we were not going to have OJ. All of a sudden, we have OJ, so we’re back to running stuff that we ran earlier from the Wing-T that we practiced during the week. It’s been two awkward two weeks for us.”

In their win last against Southern Prep in week two, Tolbert was the difference-maker. He missed practice due to a knee injury but came back for the game and ran for 160 yards on more than 30 carries.

The Rebels key in on stopping the run, meaning Tolbert will be Rebels focus on Friday.

“OJ is definitely a kid that we have to know where he’s at all times and be able to defend him on the field,” Allen said. “He’s been a good player for a really long time for them.”

With the Rebels keying in on Tolbert, Springwood quarterback Cooper Champion will be an x-factor in Friday’s matchup.

“This week, he’ll have a bigger role than he did last week,” Gartman said. “We’re trying to see what he does well, what his strengths are, and you really don’t know that until you’re in the fire. We didn’t see much of anything until Abbeville. He runs the ball a little bit better than I thought he did. We’re going to work a little more on runs that are designed for him. Cooper is going to be a good player for us, we just have to keep working him.”

Friday’s matchup will also have more than just bragging rights on the line, as the Rebels and Wildcats are in the same region for the first time since 2006.

“That is one thing that is different,” Gartman said. “It means a little bit more this year. Just like every year, they’re strong, and we have a challenge. We’ll tee it off Friday to see how we do.”

Kickoff is scheduled for 8 p.m. EST. The game will also be Springwood’s senior night.