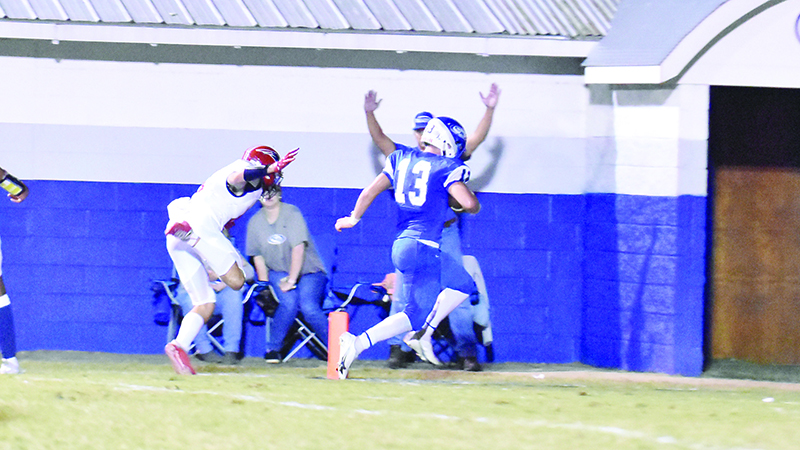 Plenty of offense and key stops led the No.2 Chambers Academy Rebels to a top-5 win on Friday, as the Rebels defeated No.4 Pike Liberal 44-25.

“It was a huge win for our kids,” head coach Jason Allen said. “I thought we played really well tonight against a really talented football team. We were able to really just flex our muscles offensively. I don’t think they stopped us all night. I’m just proud of our kids, and the way they played. I think our kids made a statement tonight. We’re here and we have a pretty good club.”

The Rebels got the game started with a bang, as junior John White took the opening kickoff to the 50-yard line from inside his own 10-yard line.

The Rebels marched downfield through quick passes and several runs.

The drive was capped off with a seven-yard run by TY Trammell. Quarterback Payton Allen scored the two-point conversion.

The Patriots answered as quarterback Mayes White hit Levi Sikes deep over the middle of the field for a 46-yard gain. They scored on the next play with a one-yard run up the middle.

The game seemed like it was going to be a shootout as the Rebels steadily went downfield driving 78 yards in about five minutes. The drive was capped off with a one-yard score by junior running back Jordan Benbrook.

Following Benbrook’s touchdown, the Patriots took the kickoff 60-yards to the Rebel 25-yard line, but the Rebels’ defense didn’t bend, as Payton Allen intercepted a pass over the middle of the field, cutting the drive short.

The Rebels offense continued offensive dominance, as Benbrook scored his second touchdown of the game with less than 30 seconds left in the opening quarter. Benbrook took a handoff 29-yards to the left side of the field on the score.

By the end of the quarter, the Rebels had built a 22-7 lead.

Chambers tacked on another score in the second quarter, as Benbrook scored his third touchdown with a one-yard dive into the end zone.

For most of the season, the Rebels have dominated teams on offense through the air, but on Friday, the Rebels scored all of their touchdowns on the ground.

Along with Tramell and Benbrook, Payton Allen and wide receiver Jeremy “Spud” Conway both scored a touchdown on the ground.

“I thought we were very balanced,” Jason Allen said. “We were almost even with run-pass yards at halftime. We were able to pound the football.”

The Rebels scored on all but two of their drives on Friday. The only two times they failed to score were the last two possessions of the halves. In the first half, they just ran out of time, as they took a knee to wind down the clock.

Outside of those two drives, the Rebels faced two fourth downs, converting both. The first fourth down was on a fourth and 11. The Rebels lined up in a punt formation only once. On that play, Payton Allen took a deep snap and hit John White, who made an excellent catch falling to the ground to secure the first down picking up 16 yards on the play.

“They were walking down and blitzing. They were putting their outside backers on our slots, and we felt like we had a mismatch there,” Jason Allen said. “We were able to sling it out there and let our guys make some plays.”

Defense has been the Rebels calling card all season. Though it bent during most of the game, the defense made stops throughout the night.

The Rebels were able to intercept the Patriots three times, as Payton Allen grabbed two and White ended the Patriots’ final drive with a pick.

“We bent a little, but that’s an explosive football team,” Jason Allen said.

“We let them off the hook on the first drive, just a couple of things that kept some drives [alive]. Just some things we need to clean up, but that quarterback can go. Their running back can go. They have those big long guys. As good offensively as we are, we have little margin for error on the defensive side.”

The Rebels are now 6-0 on the season heading into their bye week.