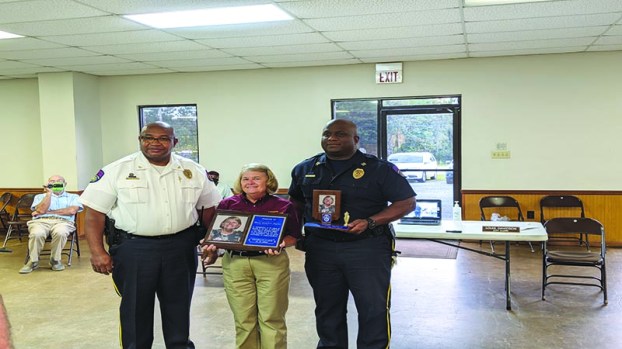 The LaFayette City Council met on Monday for the last time before the runoff election, which is set for Oct. 6.

The meeting started with a special presentation from LaFayette Police Chief George Rampey.

Rampey, along with Captain Christopher Trice, called up Cheryl Royster to receive a plaque and a desk plaque thanking her for her 42 years of service to the LaFayette community and police station.

“Forty-two years is a long time, and when they are around like that, you need to show them that their service has not gone unnoticed or unappreciated,” Rampey said.

The plaque reads as follows:

“Presented to Cheryl Langford Royster. In recognition of 42 years of service to the city of LaFayette. You are a valuable asset to our office and to the city. Your dedication has not unnoticed or unappreciated. Congratulations on 42 years.”

Royster received the plaque to standing applause by the council and by all those present.

“I think I’ve been blessed to work for the city of LaFayette for that long,” Royster said. “They’re my family to me. We’re together almost as much as we are with our own families. But I sure appreciate everything.”

Mayor Barry Moody announced to the council that there had been interest in putting up street lights on 431 heading toward Chambers Academy, which is also known as the junction.

Moody approached the council with the addition of six new lights, which would cost the city only $82.50 a year. Tallapoosa River Electronic Co-op would add four more street lights, at no cost to the city, giving that stretch of Highway 431 10 new lights.

“We need it in our city,” District B Representative Charlotte Blasingame said. “I think it’s a great idea that we need.”

District D Representative Michael Ellis was also in favor for the new lights, but he would like to see the business owners take care of their property.

“Some of them want us to light [up their businesses], but they need to do a good job of cleaning up and making sure they’re in compliance with city ordinances,” Ellis said. “They want to petition and want us to do something, they need to meet us halfway and make sure they’re doing what they’re supposed to do.”

Rampey announced that the police department would hold a driveby trick-or-treat event.

“We want to do something to keep the kids from having to go from door to door,” Rampey said. “What the community can do is they can bring their kids through, and we’ll just be there handing out candy and other little things that will be in their packages. Everything will already be prepackaged, so they won’t have to worry about digging in [a bowl]. We do something to provide another place for our kids to go without having them go from door-to-door dealing with all the COVID-19 and other things, just to keep them safe.”

The driveby will take place on Halloween night from 5 to 7 p.m. at the LaFayette gym parking lot.

The council announced that the results of the Oct. 6 election will be canvased on Oct. 13 at noon at the ALFA building. The next council meeting will be held after the results are canvassed.

There are two spots up for election in the runoff, as Moody faces Kenneth Vines for mayor, while Blasingame faces Shannon Hunter for District B.