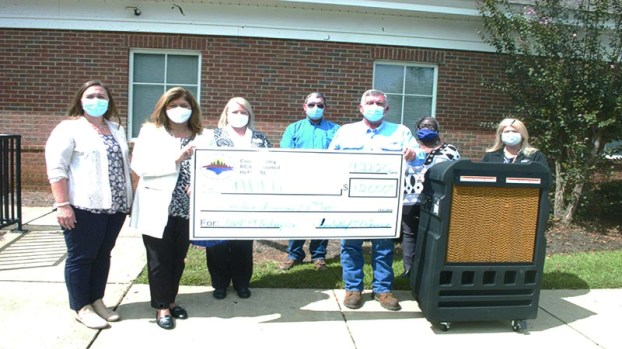 VALLEY — Representatives of the Coosa Valley Resource Conservation and Development Council were at the Chambers County Health Department on Tuesday to thank the staff on the good work they have done this spring and summer good work they’ve done with testing for COVID-19.

They also shared 9 and to share the good news that the Coosa Valley RC&D Council is committing $12,000 to pay for items needed at testing sites such as tents, portable air conditioning units, fans, coolers and more.

The Coosa Valley RC&D Council is a 501 (c) 3 tax-exempt organization made up of 11 counties in east-central Alabama including Chambers, Calhoun, Cherokee, Clay, Cleburne, Coosa, Etowah, Randolph, St. Clair, Talladega and Tallapoosa counties. There are more than 4.3 million acres of land in the service area. The Coosa Valley RC&D Council is committed to protecting, enhancing and developing natural and human resources.

“Our council is made up of representatives of our 11- member counties,” said Coosa Valley RC&D office manager Christy Cochran. “Earlier this year, the state and the Alabama Department of Public Health teamed up on a $100,000 commitment that would allow nurses and clerical staff at testing sites to have tents, cooling systems, coolers and drinks to help keep them cool during those hot summer months they were outside at a testing site. This $12,000 will all0w them to continue with what they have been doing.”

One of the most valuable pieces of equipment the Chambers County Health Department staff has is what’s called a Swamp Monster. It’s a portable unit that can be connected to a water source to produce a cooling mist. It was very much appreciated on those hot days under the testing tent. Coolers were important, too. People being tested were asked to remain inside their cars and to have their engines shut off while being tested. When the testing was finished, they received aa cold bottle of water. was much appreciated.

During the spring and summer months, health department nurses would go twice a week to a different site in the 11-county area to test for COVID-19. It would take them at least an hour to set up to have three or four hours of testing. A total of eight nurses and clerical staff would be at each site. On any given day, between 10 and 50 people would test positive.

All people who were tested were told to be isolated until they got their test results. Those who tested positive would remain in isolation for 10 to 14 days until re-tested.

Personal Protective Equipment (PPE) such as masks, gowns, gloves, goggles, face shields and the like were provided to them by the state and ordered from a warehouse in Montgomery.

“The biggest message we have tried to get across about COVID,” said Connie King, assistant director of administration for the East Central District, “is that if you don’t feel well, get tested, and once tested stay home until you get your test results.”

State Representative Debbie Wood said there’s good news and bad news about COVID. The bad news is that the positive tests are up at the East Alabama Medical Center. The good news is that people with COVID aren’t getting as sick as they got in the early stages of spread.

“There aren’t as many people going on ventilators,” she said. “The doctors, nurses and medical staff have learned better treatments through experience.”